Maimaigon[Japanese title] is a giant snail monster which Escargoon was transformed into after putting on a custom-made metal shell sent by Night Mare Enterprises, and appears in the Kirby: Right Back at Ya! episode Shell-Shocked. Maimaigon attacks by grabbing his opponent with his long "tongue" and shooting at them with the "Mai Mai Beam". He can only be restored to normal by splitting the shell in two, though this requires the Hammer Throw technique; the strongest and final attack in Hammer Kirby's arsenal.

The Japanese name for this monster is used for this article's title, because Maimaigon never got a localized name in the 4Kids version.

The main component of Maimaigon is the white metallic shell that is sent by Night Mare Enterprises. This shell is significantly tougher than Escargoon's normal shell, and comes with yellow and red accents on the sides. When Escargoon fully transforms into Maimaigon, the shell also gains two spiky prongs on the top which can be used to conjure and fire the "Mai Mai Beam". When this shell is broken, Escargoon is returned to his normal state.

Shortly after putting on the shell, Escargoon appears to be normal, but his mood becomes drastically more sinister. From there, he transforms into Maimaigoon, first going through an intermediate form where his eyes disappear and his teeth turn sharp, then assuming his final form by retracting into the shell, where only his "tongue" sticks out and his eyes glow though the shell's opening with green light. Maimaigon can grab his opponent with his tongue, but does not appear to have an exceptionally strong grip. His main attack comes in the form of the aforementioned Mai Mai Beam, which shoots bolts of lightning from the conduit on his shell. 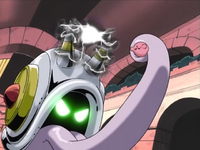 Maimaigon appears in Shell-Shocked, and is formed shortly after Escargoon puts on the shell that King Dedede bought for him from Night Mare Enterprises. He describes the shell as heavy at first, but after King Dedede tries and fails to break the shell with his hammer, Escargoon starts to laugh maniacally, and then transforms into the monster proper. From there, he attacks Kirby by grabbing him and prepares to hit him with his Mai Mai Beam, but Kirby is able to break free and gain the Hammer Copy Ability by inhaling King Dedede's hammer. From here, Kirby attempts to break open Maimaigon's shell using repeated hammer strikes, but appears to be making no progress, and has to continue avoiding the monster's attacks. Eventually, Kirby is able to cause Maimaigon to recoil by striking his tongue, then finally break the shell using the Hammer Throw technique, which restores Escargoon to normal, but forces him to flee the scene before anyone can catch sight of him without a shell on.