Como is an enemy debuting in Kirby's Dream Land 3. He resembles a spider, usually with three body segments, three eyes and six stubby legs, three on each side of his body. His color scheme varies between appearances, but is almost always dominated by shades of yellow. He usually appears dangling on a string of spider silk, serving more as a stationary obstacle rather than a more traditional active enemy for Kirby to fight. In most of his appearances he grants no Copy Ability when inhaled, but in Kirby Star Allies Kirby can inhale Como for the Spider ability.

In Kirby's Dream Land 3, Comos make their first appearance. Here, their body is portrayed as yellow, while their legs are pink. The color of their pincers differs between sprites and artwork, being shown as pink in the former and yellow in the latter.

These arachnids are first encountered in the sixth stage of Grass Land and comparably rare throughout the game. They start out hanging from a ceiling, immobile and often partially hidden, but as soon as Kirby approaches them, they fall down, dangling above the ground by a long silk thread at a height that depends on the hero's position.

As soon as the Como has stopped, he proceeds to spit a ball of silk towards Kirby if he is below him, which turns into a small net after a short while that floats in midair before disappearing. Kirby gets hurt if he touches these projectiles, but may use a Copy Ability or spit something at them to destroy them. After waiting for a few seconds, the Como pulls himself upwards again, returning to his starting position and repeating the process shortly afterwards.

Comos are vulnerable to any attack, but yield no ability when inhaled and swallowed. As an alternative to attacking the spider himself, Kirby can sever the thread by which he is hanging by using an ability or spitting something at it. Succeeding in doing so causes the Como to fall down, popping when he hits the ground. Once defeated, these enemies do not respawn until Kirby leaves the section they are found in.

In Kirby's Dream Land 3, Como can be found in the following levels and stages:

Comos reappear in Kirby: Canvas Curse, where the color of their body has been changed from yellow to brown or orange, while their legs and pincers are now yellow. The number of glands on their abdomens has also multiplied from one to two.

In Kirby: Canvas Curse, Como appears in the following locations:

Comos reappear in Kirby's Return to Dream Land as a common enemy, being first encountered in the second stage of Cookie Country. In this incarnation, they look similar to their original in-game appearance, but only consist of two segments, having gained a horizontal brown stripe across their middle in place of a division line. Comos in this game often hang off of ceilings and fall down on a web when Kirby gets near, exhibiting no further aggressive behavior. Sometimes Comos will retract back into their original position. Like in other games, cutting the string with a projectile or other attack will cause the Como to drop, thereby defeating him.

As with many other enemies in Kirby's Return to Dream Land, bigger versions of Comos are sometimes encountered. These behave identically, but can only be inhaled with a Super Inhale and results in a larger star when spat out.

In Kirby's Return to Dream Land, Como can be found in the following levels and stages:

Como makes an appearance in some of the chambers in New Challenge Stages. His look and function are directly taken from his previous appearance in Kirby's Return to Dream Land.

Como appears in Kirby: Triple Deluxe, with the same appearance and attack pattern as before.

In Kirby: Triple Deluxe Como can be found in the following levels and stages:

Como appears in some stages of Dedede's Drum Dash Deluxe, dropping in his string from the sky to try and get in King Dedede's way. He will be defeated if King Dedede jumps through his string, cutting it off and causing him to fall.

Como appears briefly in Kirby: Planet Robobot as well, again with the same appearance and attack pattern as before. He only appears in Stage 7 of Gigabyte Grounds.

Pause screen art of Como as a Friend in Kirby Star Allies.

Como appears in this title, though this time with a much more significant role. For the first time in the series, he yields a Copy Ability when swallowed, in the form of Spider. As such, he can also be recruited as a Friend, where he can then roam freely on the ground, and use similar moves to Spider Kirby. Upon becoming a friend, Como gains feet and is no longer constrained to his silk strand.

In Kirby Star Allies, Como can be found in the following levels and stages: 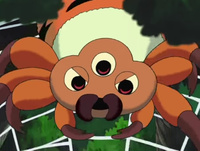 Como as it appears in Kirby: Right Back at Ya!.

Como makes a cameo appearance in the Kirby: Right Back at Ya! episode Flower Power. Here, it is much larger than its video game counterpart, and sports a hairy body with tiger stripes, acting more like a traditional spider. It lives in the deep jungle region Babagahara, making large cobwebs for prey to fall into. Tuff accidentally drops a comatose Kirby into one of these webs, and with covert help from Meta Knight, manages to repel the spider so he can get Kirby out of there.