This article is about Master Hand and Crazy Hand. For Mid-Boss appearance of Master Hand, see Master Hand.

Master Hand & Crazy Hand are pair of bosses that appear in Kirby & The Amazing Mirror, at the end of Candy Constellation. They are a pair of giant floating disembodied gloves that can perform various physical and magical attacks, either individually or in tandem. Master Hand also appears on his own as a Mid-Boss in the same game, though functions somewhat differently than when paired with Crazy Hand. Both of these enemies originate from the Super Smash Bros. series, and many of their attacks are carried over from those games. Master Hand is the right hand, and Crazy Hand is the left.

In Kirby & The Amazing Mirror, Master Hand and Crazy Hand are fought together as a boss in Candy Constellation.

Master Hand retains his attacks from his Mid-Boss appearance, and with Crazy Hand, he also has the new move of the hands "Hi-five"ing slowly in the center of the stage, bearing a resemblance to the "clap" move in Super Smash Bros. Melee. In addition, the hands retain the combo move of Master Hand punching Crazy Hand's palm. Like many other duo bosses, Master Hand & Crazy Hand have separate HP, and are defeated separately. Once one is defeated, duo attacks are no longer possible. 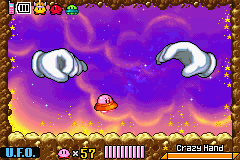 Master Hand & Crazy Hand are taking the matter into their own hands.

Both Master Hand and Crazy Hand appear as stickers. Master Hand is common-type sticker, while Crazy Hand is rare one, and can only be found in Access Ark - Stage 7 EX.

Master Hand debuts in this game. In each game, he is the final boss of the "Classic" single-player mode. He is the only character faced in the single-player mode whose health is measured in a decreasing amount of HP, as opposed to the accumulating-percentage system used elsewhere in the game.

This game is also Crazy Hand's debut. Crazy Hand is fought when Classic Mode is completed on Normal difficulty or higher in 18 minutes or less and he only appears when Master Hand's health is reduced by half. Additionally, the two of them both appear in the 50th event match: Final Destination Match.

Master Hand and Crazy Hand appears once again in Super Smash Bros. Brawl. Master Hand is once again fought after completing single-player mode. Crazy Hand is fought under slightly harder conditions. The player must clear Classic Mode in nine minutes or less on Hard difficulty or harder but this time, he is fought at the beginning of the fight along with Master Hand. He also appears as a boss on Boss Battles Mode.

Master Hand reappears in the Classic Mode. If the Intensity is 3.0 and higher for both versions, Crazy Hand will join Master Hand as usual.

In the Wii U version, there is a separate mode called Crazy Orders, where the player clears a series of challenges in a row. Once the player is ready, Crazy Hand is faced at the end, along with other opponents depending on how many rounds were cleared beforehand.

Master Hand and Crazy Hand are fought several times as a separate bosses (mainly in World of Light), but appear alongside once. In World of Light, Master Hand is primarily under the control of Galeem, which is mirrored with Crazy Hand's enslavement by Dharkon. The fighters can free the real Hands in the final part of the story mode, who then work to create a rift to the true final battle. Defeating them also grants the player with their respective spirit.