Revenge of the King

Revenge of the King is the seventh and final main game in Kirby Super Star Ultra. It is a harder and longer version of Spring Breeze, with many enemies replaced with tougher counterparts, and the bosses all upgraded (and Kabula thrown in as well). Thus, it can be also considered as a spiritual remake of the Extra Game of Kirby's Dream Land. It is unlocked when Milky Way Wishes is completed, and must be completed to unlock The True Arena.

King Dedede wants to get revenge on Kirby for the events of Spring Breeze and Gourmet Race, so he steals the Sparkling Stars again, musters his forces, fortifies his castle, and sends Kirby a challenge.[1] Kirby sets off to defeat him again by traversing the land and besting his minions. He collects the Sparkling Stars back along the way, using them to form the Starship and battle Kabula and gain access to the castle.

Once inside, Kirby charges toward the throne room, as King Dedede sends in the last of his minions in a desperate bid to stop the pink menace. As this happens, Dedede is having a running conversation with his closest soldier, Bandana Waddle Dee, who bravely defends his king despite being dismissed. Once Kirby reaches the ring, he battles Dedede, who has donned a mask and jet hammer for the occasion.

Once defeated, King Dedede is knocked out of his castle once more. He and the remainder of his Waddle Dees roam the desert in disgrace, in the knowledge that they simply cannot best Kirby.

The stages are played in the following order: 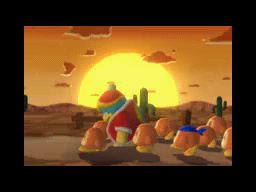 King Dedede after his defeat.