Bandana Waddle Dee, known simply as Waddle Dee prior to Kirby: Triple Deluxe, is a major and recurring supporting character in the Kirby series. As his name implies, he is a Waddle Dee wearing a blue bandana on his head. His weapon of choice is usually a spear, but sometimes he wields a parasol. Originally shown to be King Dedede's most loyal subject, he is now shown to be Kirby's closest friend and sometimes even assists him in battling the king.

Bandana Waddle Dee debuted in Kirby Super Star as the first opponent in Megaton Punch. His first major role was in Kirby Super Star Ultra, as the secondary antagonist of Revenge of the King. After this, he appeared as one of the four playable protagonists of Kirby's Return to Dream Land, and has starred in nearly every game in the Kirby series since.

Additionally, a similar Waddle Dee character appeared as a supporting character in Kirby 64: The Crystal Shards. While several hints have been made that might suggest the two are the same character, this has not been confirmed.

Bandana Waddle Dee, just like other Waddle Dees, is a round, orange creature with a peach-colored face, where his eyes and most of the rest of his body are located. He has also two yellow feet and small stubby arms. His blue bandana differentiates him from others of his kind. In most of his appearances, he also wields a spear to further differentiate himself; the design of the spear is near-identical to that of the Spear Copy Ability, but starting in Kirby Fighters 2, the ribbon tied around it has been orange rather than red. In Kirby Battle Royale, he uses a blue parasol with a star on top of it instead of his usual spear.

Bandana Waddle Dee is most often portrayed as adventurous and energetic, contrasting with the lackadaisical nature of his kind. In Kirby's Return to Dream Land and Kirby Star Allies, his pause screen descriptions emphasize his courage compared to the other Waddle Dees, going as far as to call him "everyone's idol". Even when not in battle, he still does his best to support Kirby and his friends, as shown by how he provides Assist Stars in both Kirby: Triple Deluxe and Kirby: Planet Robobot.

He is also shown to be very determined, but somewhat fearful, in games such as Kirby Super Star and its remake. In the sub-game Revenge of the King, he became more and more afraid every time Kirby defeated one of King Dedede's minions, but even after being spared from fighting Kirby by Dedede, he went into battle anyway. This shows his bravery and strong sense of loyalty to his King. In Kirby Battle Royale, Bandana Waddle Dee showed an intense fear before battling Meta Knight and King Dedede, but still defeated both, thanks to his determination and faith in Kirby. 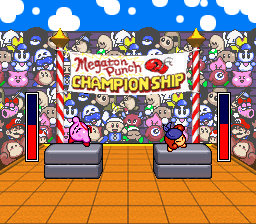 In Kirby Super Star, Waddle Dee made his debut in a minor appearance in the Megaton Punch Sub-Game, being the first opponent Kirby faces. He starts the battle by winking, waving if he wins, and fainting if he loses.

Kirby Super Star Ultra was Bandana Waddle Dee's first major appearance. He appears only in two modes: The Arena and Revenge of the King.

Waddle Dee is battled in The Revenge stage in Revenge of the King, and also has some dialogue with the Great King concerning Kirby and Mid-Bosses. After the battle against him, he appears as the only spectator during the fight between Kirby and Masked Dedede.

Waddle Dee makes a cameo in the Meta Knight battle of the Strato Patrol EOS sub-game. He is seen cheering for him alongside Sailor Waddle Dee from Revenge of Meta Knight.

Artwork of Waddle Dee from Kirby's Return to Dream Land

Waddle Dee got an even bigger role in Kirby's Return to Dream Land, this time as a playable character.

Waddle Dee can use his spear to attack, identically to the way Spear Kirby can. Waddle Dee has the same 40 HP as Kirby. Unlike Kirby, Meta Knight, or King Dedede, Waddle Dee doesn't fly, but he can make Infinity Jumps to keep up.

In Kirby's Return to Dream Land Deluxe, he is now referred to as Bandana Waddle Dee for consistency with later games, and has the orange ribbon around his spear introduced in Kirby Fighters 2. He also has Ground Thrust from Kirby Star Allies added to his move-set.

Waddle Dee appears during the intro cinematic for Kirby's Dream Collection Special Edition, to present the title screen along with King Dedede, Meta Knight, and Kirby.

Bandana Waddle Dee as he appears in Kirby: Triple Deluxe.

In Kirby and the Rainbow Curse, Bandana Waddle Dee (here referred to as Red Waddle Dee) appears alongside two differently-colored clones, Yellow Waddle Dee and Green Waddle Dee, both of which were painted by Elline.[1] These three Waddle Dees are controlled by additional players to assist Kirby by carrying him and tossing him, as well as jabbing enemies that get in the way with their spears. They are controlled normally, unlike Kirby, who remains in ball form and must follow the rainbow ropes.

In Meta Knightmare Returns, instead of giving Meta Knight an Assist Star before bosses, he will instead give him a sphere containing 10 Meta Points.

In both Team Kirby Clash Deluxe and Super Kirby Clash, Bandana Waddle Dee can be found in the village, overseeing the Gem Apple Tree. He is the first character that Kirby talks to in both games: he explains the basics of the village, as well as the situation. From that point onward, he oversees Gem Apple harvesting, giving Kirby the yield every time it's ready, as well as offering general advice and commentary.

A still from the introduction, as Kirby bumps into Bandana Waddle Dee.

In Kirby: Battle Royale, Bandana Waddle Dee serves a prominent role in the single-player mode, Dedede's Cake Royale. Kirby meets up with him on the way to the arena, finding him exhausted, having 'walked all night long' to get there. As such, Kirby agrees to carry him for a while down the trail. After Kirby deals with an enemy ambush, including another blue Kirby, the Warp Star appears to take them both to the arena.

From here on, Bandana Waddle Dee serves as an ally to Kirby in team matches. Unlike in previous incarnations, Bandana Dee uses a Parasol instead of a Spear. This Parasol is modeled after the one Kirby uses when copying the Waddle Dee Amiibo in Kirby: Planet Robobot. While the player cannot play as Bandana Waddle Dee, a hatless Waddle Dee is available who plays much the same.

In Kirby Star Allies, Bandana Waddle Dee appears as one the first available Dream Friends alongside Rick & Kine & Coo, Marx and Gooey, recruitable from a Dream Palace without the need to unlock him. His moveset is largely the same as it was in Kirby's Return to Dream Land but with a few tweaks, including the ability to have his spear receive elemental powers from allies, and, since version 4.0.0., gains the Ground Thrust attack. Since Kirby cannot obtain the Spear ability in this title, Bandana Waddle Dee is the only user of this Copy Ability (Zan Partizanne of The Three Mage-Sisters, the Dream Friend, has a different style of spear combat). Much like in Kirby's Return to Dream Land, Bandana Waddle Dee has 40 HP in most modes, but has the same health as Kirby in The Ultimate Choice.

In Guest Star ???? Star Allies Go!, Bandana Waddle Dee's title screen since version 2.0.0. features his Megaton Punch sprites from Kirby Super Star, his 3D artworks from modern titles, and his doodle sticker from Kirby: Planet Robobot. His Dream Friend jingle is based on the Disc Channel music from Kirby's Return to Dream Land, which in turn is based on Welcome to Dream Land, the title theme from Kirby's Dream Land.

Bandana Waddle Dee as he appears in Kirby Fighters 2.

Bandana Waddle Dee appears as a playable character in Kirby Fighters 2, using his same move-set from Kirby Star Allies and thus acting as a substitute for the Spear ability. He is the only Buddy available from the start. Starting in this game, the ribbon tied around his spear is colored orange, whereas in previous games it was red.

In Kirby and the Forgotten Land, Bandana Waddle Dee serves as the Player 2 character. This screenshot shows him performing an emote with Kirby in Welcome to Wondaria.

Bandana Waddle Dee returns as a playable character in Kirby and the Forgotten Land. Here, he takes the role of the second player character, and takes his spear into battle as usual. Among his new abilities is dropping spear-like projectiles downward on foes while using his Waddle Copter, as well as a new finisher to his Multispear Thrust where he swings his spear above himself and slams it to the ground, sending out a projectile.

When Kirby is using certain Mouthful Mode forms such as Car Mouth, Bandana Waddle Dee can ride on top of him while throwing spears.

In Kirby's Dream Buffet, Bandana Waddle Dee is represented by a costume that Kirby can wear. Notably, the Waddle Dee CPU racers can also sometimes wear this costume, making the resemblance practically indistinguishable. Bandana Waddle Dee also appears on three Character Treats; one depicts him alone using his artwork from Kirby's Return to Dream Land, another depicts art of him with Kirby, King Dedede, and Meta Knight on a Warp Star, also from that game, and the last depicts him using his art from Kirby and the Forgotten Land.

Bandana Waddle Dee appears as a Primary Spirit in Super Smash Bros. Ultimate. which can only be obtained by enhancing Waddle Dee's Spirit.