This article is about the failed ninja student, and should not be confused with Yamikage.

Benikage[Japanese title] is an unskilled ninja and a guest character in the anime series Kirby: Right Back at Ya!. He finds himself in Dream Land to try and obtain his lost report card to hide his shame, which was thought by Professor Curio to be an ancient artifact. After revealing his incompetence to Kirby, Tiff, and Tuff, he inadvertently finds himself up against the evil ninja Yamikage, and Kirby has to save him.

Benikage is a small creature with similar body traits to the Waddle Dees, though his eyes are a different shape and it is unclear if he has a mouth, as much of his face is covered up by his red ninja outfit. He has glove-like hands, his feet are two-toed - similar to Chef Shiitake's - and he wears sandals. He carries a number of ninja implements, including throwing stars, a sword, and smoke bombs.

Benikage attempts to act with ninja stealth and precision, but he is not very skilled, being particularly unable to throw ninja stars with any level of accuracy. While he can move fairly quietly, climb up walls, and hang from ceilings, he is not great at hiding, and is prone to losing his cool, particularly in stressful situations. His lack of skill is a huge blow to his pride, particularly when others find out. 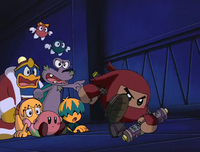 Benikage attempts to recover his report card from the Dream Landers.

Benikage makes his only appearance in the episode Ninja Binge, where he is one of the leading characters. He travels to Cappy Town to recover his lost scroll, but fails when he triggers an alarm set by Professor Curio. Although he was not caught in the act, his attempt got the Cappy villagers curious about ninja arts, and a brief ninja fad sweeps the town, giving King Dedede an opportunity to steal the scroll for himself. After Tuff tries to get the scroll back from Dedede, Benikage attempts once again to recover it, but gets caught by Kirby and the kids in Cappy Town.

Benikage reveals to them that the scroll is his report card from ninja school, and he wanted to recover it so nobody could see how bad his grades were. Tuff volunteers to help Benikage improve his skills, but he soon gets cornered by the evil ninja Yamikage, who is on orders from King Dedede to recover the scroll, still not knowing what it contains. Benikage is promptly beaten by Yamikage, and Kirby has to step in to save him, defeating Yamikage using the Ninja ability. Despite this, King Dedede reclaims the scroll and gets away, but Benikage lets him go, and resolves to improve his skills by returning to school, having been inspired by Ninja Kirby.