This article is about water as an environmental feature. For the Copy Ability, see Water. For the Top Ride course, see Water (course).

Bodies of water play a distinct role in every main-series Kirby game as well as several spin-offs, though their properties and how they affect gameplay varies between titles. First appearing in Kirby's Dream Land, water in its simplest form merely acts as an area where Kirby's movement and attack options are restricted. Additionally, enemies that are not invincible and/or aquatic in nature will almost always be defeated immediately when falling into water. Enemies common to the water in Kirby games include Blipper, Glunk, and Squishy. In the vast majority of Kirby games, Kirby and other playable characters can breathe in water and are not at risk of drowning. In addition, some characters (such as Burning Leo as a helper) can make fire underwater, which is necessary to solve certain puzzles. Other objects that enter water may have different behavior as well. Ability Stars, for instance, will sink slowly straight downward when they enter water and pop after a couple seconds.

Typically, when Kirby is in water, he will be restricted to a swimming move-set and only be able to use his Water Gun to attack, though some Copy Abilities have moves that can be used in water. When in the water, Kirby will usually be automatically equipped with a pair of swimming goggles, with some games also giving him a snorkel. Starting with Kirby's Return to Dream Land, Kirby has a distinct state when paddling on the surface of water, giving him an inner tube instead of his diving gear. When exiting water, Kirby is able to make a full leap with a jump as if he were jumping from the ground, though he needs to be at the surface for this to work properly. In many games, bodies of water will contain water currents, which push Kirby and other characters in various directions. Depending on the intensity of the current and the speed of the character swimming, these may or may not be resistible. Some Copy Abilities also have special interactions with water. For instance, when Kirby is using the Wheel ability, he can often ride along the surface of water without falling in.

The following lists notable examples of unique properties or other distinctions for water in certain Kirby games:

In Kirby's Dream Land, water is merely an area where Kirby's movement speed and attack options are limited. Instead of actually swimming, Kirby instead moves about by making small jumps. He cannot use the Water Gun in this game, as that would not debut until Kirby's Adventure. 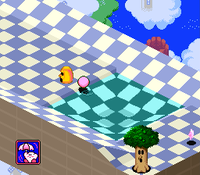 In Kirby's Dream Course, water takes the form of ponds on various boards. If Kirby falls into a pond, it may be difficult for him to shoot out again, since his shot momentum is greatly reduced. Using the right speed, angle, and timing, Kirby can skip across the surface of a pond to gain more distance. He can also use the Freeze and Wheel abilities to cross ponds. Lastly, switches can be found to make ponds appear or disappear.

In these two games, Kirby can gain the help of Kine the sunfish, whose specialty is traversing bodies of water. Using his superior swimming speed, Kine can easily overcome water currents that would otherwise push Kirby back. Pairing up with Kine also allows Kirby to use his inhale underwater, which he normally is not able to do.

In Kirby 64: The Crystal Shards, Kirby has the ability to use his inhale and his Copy Abilities underwater, though some abilities are restricted in various ways (usually when it comes to speed and/or range).

Kirby floating in water (with only one second left) in Kirby Tilt 'n' Tumble.

Water appears as an opaque surface hazard in Kirby Tilt 'n' Tumble. Kirby cannot dive underwater in this game, but instead floats on the surface. While in water, Kirby can float for only three seconds before drowning. To cross more safely, Kirby can make use of a Raft.

Like with Kirby Tilt 'n' Tumble, water in Kirby Air Ride is opaque, and Kirby cannot dive under it. Unlike the previous example, however, Kirby is in no danger of drowning when swimming through water. Air Ride Machines travel over water as if it were a solid surface, and items do not sink in water. Some areas have rapid flows of water which carry Kirby's machine forward in a similar manner to a rail. In the Water Top Ride course, water serves as a hazard gently affecting the trajectory of the racers.

In Kirby: Canvas Curse and Kirby and the Rainbow Curse, Kirby will automatically rise to the top of water when submerged under normal circumstances, and cannot swim on his own since he has no limbs (or in the case of Kirby and the Rainbow Curse, simply chooses not to use them). To dive underwater, the player needs to draw a Rainbow Line which Kirby can ride the underside of. In Kirby: Canvas Curse, Kirby can also sink by using the Stone ability. 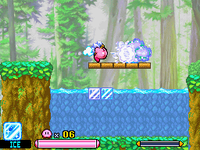 Kirby's Epic Yarn and its Nintendo 3DS port treat the surface of water as little more than a yarn outline. As such, bodies of water can move in many different ways and merge with other surfaces, allowing for some dynamic traversal through water, particularly in stages like Splash Beach and Fossil Reef.

Kirby Mass Attack is the only Kirby game that employs an air meter for the Kirbys, which causes them to drown if the meter runs out. Having a greater number of Kirbys in the team allows for a longer air meter. Air bubbles need to be caught to restore the meter when the surface cannot be accessed.

Kirby creating an electric wave on the surface of water in Kirby Star Allies.

In Kirby Star Allies, any Zap-based attack will cause sparks to shoot out across the surface of water where they touch, which can defeat enemies and activate switches.

In Kirby and the Forgotten Land, Kirby is not able to dive underwater. Instead, he can merely swim along the surface, and can use his inhale and Copy Abilities there instead of his Water Gun. This marks the first time that Kirby cannot dive in water in the main series. Additional hazards such as whirlpools are present in the water, which can create currents and drag Kirby in if he ventures too close. Using the Ice ability, Kirby is able to skate along the surface of water.

In addition, Kirby and the Forgotten Land introduces freezing water as a hazard. If Kirby touches freezing water, he will immediately freeze solid and sink for a moment before vanishing and reappearing on-stage, in a similar manner to falling into a bottomless pit. Enemies that touch freezing water will also be frozen this way.

Levels and stages based on water[edit]

The following are prominent levels and stages throughout the Kirby series which are primarily water-based:

Games which do not have water[edit]

The following Kirby games do not have water as an environmental feature: