Fatty Puffer is a boss that debuted in Kirby's Return to Dream Land. It, as its name implies, is a fat pufferfish. It bears a royalty-inspired design, and its attacks are characterized by using its girth to perform body slams and rolling attacks. It is the boss of Onion Ocean and guards the Lor Starcutter's Left Wing.

Fatty Puffer's headdress consists of coral, which it uses to hide and ambush Kirby when he enters the room, much in the same way that Emperor Bulblax from the Pikmin games would. Its body is largely a blob that features purple scaly skin with a white belly, topped by a fishy face. Its fins are very small, and do not factor into the battle at all.

At first, it is not that large, but once its health is halfway depleted, it puffs up to an impressive size, like Whispy Woods and Mr. Dooter do.

In the Extra Mode, Fatty Puffer has a red and gold color scheme. Its headdress is also much fancier, resembling a crown. 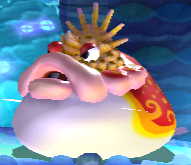 The following lists all of Fatty Puffer's attacks in the Main Mode of Kirby's Return to Dream Land. Attacks in italics are used in the second phase of the fight only. Most attack names come from pages 122 and 245 of the official Japanese strategy guide and page 172 of the Perfect Support Guide unless otherwise stated.

In Extra Mode, Fatty Puffer's attacks are much more vicious and quick:

Once its health is depleted, Fatty Puffer's eyes white out. Then, it slumps over and explodes, yielding the Lor's Left Wing.