Destroya (also called Destrayer[1]) is a type of gargantuan flying saucer in Kirby: Right Back at Ya! used by Night Mare Enterprises to bombard enemy planets and defend eNeMeE's Fortress from invaders. They first appear in the episode Air-Ride-in-Style - Part I, and are seen and battled against by Kirby and his allies in every episode from then to Fright to the Finish. They have a number of different attacks, but their homing bombardment projectiles are the most notable, and they grant Kirby the Crash Copy Ability when swallowed.

Destroyas are massive largely flat flying saucers which travel through outer space and are used when Night Mare Enterprises is serious about destroying an enemy threat. The size of a single Destroya rivals the entire kingdom of Dream Land, though their size does appear to fluctuate slightly in later episodes. They are largely dark gray in color, though they are cris-crossed with all manner of patterns on their surfaces with glimmering lights that usually shine blue. The outer rim of the Destroya notably lights up when it is moving or attacking.

Destroyas have two primary methods of attack. When bombarding an enemy from above, they send out an endless volley of explosive projectiles which have the power to home in on targets. This makes them extremely dangerous when they target specific things on the ground. Their second attack involves shooting a concentrated laser beam from the rim which is used in ship-to-ship combat, and these beams are capable of ripping through the hulls of other Destroyas and doing severe damage to other ships such as the Halberd. Aside from the aforementioned weakness, Destroyas can be easily destroyed using the Halberd's primary offensive turrets or by being blown up from within by Crash Kirby. 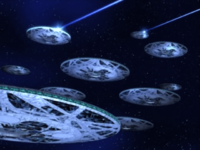 A single Destroya appears in Dream Land in Air-Ride-in-Style - Part I and Part II in order to destroy Kirby and, when that fails, level Kabu before Kirby can recover. It causes havoc in Dream Land as it does so, but Kirby eventually defeats it by riding inside it and blowing it up from withing using the Crash Copy Ability.

Later on, in Cappy Town Down, a fleet of Destroyas is sent to completely demolish Dream Land, and in the process, they reduce Cappy Town to ashes. To counter this, Meta Knight gathers a crew and launches the secret warship Halberd to dispatch the Destroyas and then head for eNeMeE's fortress.

In Combat Kirby and Fright to the Finish, the Halberd is forced to contend with the hundreds of Destroyas that guard eNeMeE's fortress. During this struggle, they are aided by three rogue Destroyas piloted by Knuckle Joe, Sirica, and Sir Arthur and his men. These three Destroyas are the last ones that survive the destruction of eNeMeE's fortress.