Planet Popstar (Pop Star in older games) is the yellow star-shaped iconic home world of Kirby and his closest friends in the Kirby series. It is known throughout the Kirby universe and even outside the series; its cartoon-like ringed appearance first popularized in Kirby Super Star. Its brightly-colored, surreal, and vibrant landscapes also make it a well-represented Nintendo locale, akin to Hyrule in The Legend of Zelda series and the Mushroom Kingdom in the Super Mario series.

Though not always explicitly mentioned through the series, nearly every Kirby game takes place on Planet Popstar's surface, whether that be in the oft-seen kingdom of Dream Land or somewhere else in the surrounding countryside, seas, or skies. When viewed from outer space, Popstar does not appear to have any landmarks (with an often rough and cratered yellow surface), but when looking closer toward the ground, it takes on Earth-like continents, islands, and oceans, though the landmasses are often star-shaped. Due to its natural beauty and energy, Popstar is frequently the target of villainous alien invaders, who Kirby and his friends must fight off time and again. The closest that Popstar ever came to full subjugation was in Kirby's Dream Land 3, when Dark Matter enveloped the world, and Kirby: Planet Robobot, when the world was briefly infested by the machinery of the Haltmann Works Company. In both instances, the planet was able to quickly restore itself after the respective villains were defeated.

Popstar is a somewhat flat yellow star-shaped planet with two (sometimes more) rings orbiting it. It gives off a very strong light from outer space (and is stated to be the brightest star in the universe in Kirby Mass Attack), though on the surface, it looks much more earth-like and has a regular day-night cycle (usually). While not usually visible in outer space, Popstar has at least one Sun and Moon in its orbit, the latter of which can be visited with relative ease.

Characteristic to Popstar is its relatively untamed natural environment, brimming with life of all sorts. Landscapes include lush green meadows and forests, deserts with towering dunes, extensive tropical coastlines and deep oceans, icy mountain chains, volcanic regions, and - most strikingly - extensive cloudscapes which can be walked upon, dotted by floating landmasses. Though most of Popstar is undeveloped, there are numerous ruins which dot the planet's surface, which can be found in every biome (including the cloudscapes). The builders of these ruins are unknown, but there are hints that they were created by ancient civilizations that once inhabited Popstar.

While most of Popstar's sentient inhabitants live free on the planet's surface, there are at least three established groups on Popstar. These groups are the kingdoms of Dream Land (which King Dedede claims to rule) and Floralia (where the People of the Sky, who were previously ruled by Queen Sectonia, live), and the Meta-Knights (which Meta Knight leads).

Popstar occasionally sees changes to its topology over the course of the series. The most notable of these changes is the permanent addition of the Dreamstalk connecting Dream Land to Floralia after the events of Kirby: Triple Deluxe, though this is not visible from space. Smaller changes include the planet's temporary clay-like appearance in Kirby and the Rainbow Curse, its rings changing from solid rays to twinkling particles in Kirby: Planet Robobot, and its surface gaining a rocky, moon-like texture in Kirby Star Allies. 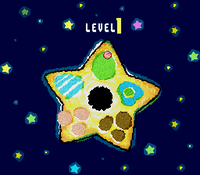 This image of the World Map from Kirby's Dream Land 3 shows five areas on each end of Popstar that are typical environments for the planet. The sixth in the middle is very atypical.

So far in the Kirby series, there have been seven games that explicitly show world maps that stretch across the surface of Popstar: those being Kirby's Dream Land 3, Kirby Tilt 'n' Tumble, Kirby: Squeak Squad, Kirby Mass Attack, Kirby's Return to Dream Land, Kirby: Planet Robobot, and Kirby Star Allies (though that last example is merely a level hub). Generally, each area on these maps, whether they be levels or stages, will feature the following distinct environments:

In particular, the world maps for Kirby's Dream Land 3 and Kirby's Return to Dream Land have their first five levels on Popstar matching each-other almost exactly in environmental theme, though the order in which they are played differs.

Though most of Kirby's adventures take place in and around Dream Land, which is de-facto part of Popstar, the following will only discuss titles where the planet itself is a destination or plot point:

Planet Popstar was first named in-game (in all capitals as "POPSTAR" in the SNES version, and "Pop Star" in the DS version) in Kirby Super Star. Most of Kirby's adventures take place on it, except for Milky Way Wishes, where Kirby only visits it in the intro. Popstar is explicitly seen from space in the level hub for Milky Way Wishes, and is also seen in the sub-game Megaton Punch. In the latter case, when Kirby or his opponent punch the blocks with sufficient force, a crack runs through the planet to exaggerate the effect of the punch.

Popstar (formatted "PopStar" in the English manual) is the main setting of the game Kirby's Dream Land 3. During the game, the peaceful planet is attacked by Zero and Dark Matter, which possesses some of the residents and spreads over the whole planet's surface in a black cloud. Kirby and his friends set out to stop Dark Matter by traveling through five regions of Popstar and destroying its influence in these lands. The five different areas of Popstar are called Grass Land, Ripple Field, Sand Canyon, Cloudy Park, and Iceberg in this game. 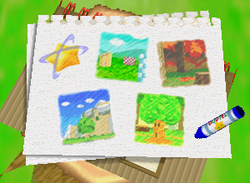 Pop Star has four simple stages, as it is the first world in Kirby 64: The Crystal Shards.

Pop Star is the colorful first world encountered by Kirby and Ribbon during their mission to relinquish their realm from Dark Matter in Kirby 64: The Crystal Shards. As Kirby's home planet, Pop Star is relatively far from the grasp of Dark Matter, however, the popular, and familiar tree-boss, Whispy Woods seems to be one of the only beings in the realm to be influenced severely by such dark forces. This region is known for its seasonal variety and its beautiful landscape, boasting a vivid autumn-like stage, and a grand castle (most likely Dedede's) that Kirby must infiltrate in his search for Crystal Shards.

Like in all worlds of Kirby 64: The Crystal Shards, the first three stages within the Pop Star hide three Crystal Shards, while the final stage rewards only one after the defeat of the boss. Nevertheless, all shards within one level need not to be collected before Kirby is granted access to the next; Kirby must simply complete the level.

Popstar is shown in the closing cutscene of Kirby Mass Attack as Kirby returns home from his arduous battle with Necrodeus. The star is said to "[shine] like a brilliant beacon of hope."

Planet Popstar in the opening cinematic for Kirby's Return to Dream Land.

Planet Popstar reappears in Kirby's Return to Dream Land, as the site where the Lor Starcutter (under Magolor's possession) crashes in the opening cutscenes of the game. Popstar constitutes the majority of the early and middle stages of game play, and is the planet where Kirby, along with Bandana Waddle Dee, King Dedede, and Meta Knight must find the missing parts to the Lor Starcutter. Popstar in this game consists of the first five levels of the game: Cookie Country, Raisin Ruins, Onion Ocean, White Wafers, and Nutty Noon. The remaining two main levels are located in Halcandra, Magolor's homeworld.

Just after Kirby defeats Queen Sectonia in their initial battle in this game, she merges with the Dreamstalk. As she does, the planet can be seen briefly, as the Queen's roots begin to strangle the life out of it. Kirby has to defeat her again to save the planet.

In Kirby and the Rainbow Curse, Claycia steals the colors of Planet Popstar to create the seven worlds of Seventopia. It is seen in its monochromatic, lifeless flair on the world map, in one of the pages of Elline's Secret Diary, and once again near the end of the credits screen. 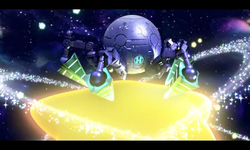 Planet Popstar is approached by a planet-sized spaceship.

In this installment, Popstar is invaded by a spaceship (the Access Ark) roughly the same size as the planet itself, and mechanized by its robots under the command of the Haltmann Works Company. Kirby is tasked with stopping this invasion by smashing each of the legs of the ship, then boarding it to deal with its president. In the process, the ancient computer aboard the ship - Star Dream - goes berserk and takes control, forcing Kirby to battle it and the entire spaceship with the help of Meta Knight and the Halberd. Once Star Dream is defeated, all the mechanization the planet underwent is undone.

Planet Popstar is the second level of Kirby Star Allies. This level consists of five regular stages along with two unlockable extra ones. As might be expected, each stage takes place in a vastly different ecological zone, ranging from tropical beach-sides and frozen tundras to volcanic regions and ancient ruins. At the end of this level, Kirby and his star allies run into Meta Knight, who has been influenced by the Dark Hearts scattered across the planet. Despite still retaining some of his decorum, he battles Kirby and his team, splitting into multiple copies of himself during the fight.

Shortly after Meta Knight is subdued, a massive flying fortress crashes into Popstar from space, which serves as the next level.

Fecto Elfilis opens a portal to Planet Popstar, intending to crash it into the New World.

Though the planet is largely absent from Kirby and the Forgotten Land (aside from the opening cutscene taking place within Dream Land), Popstar makes a surprise appearance at the end of the final boss battle with Fecto Elfilis, where it tears open a portal from the New World to Popstar in order to cause the two planets to collide. After Kirby defeats Fecto Elfilis using Big-Rig Mouth, he and Elfilin wind up back in Dream Land, and Elfilin manages to close the portal that Elfilis opened. After this, it is revealed that Elfilin can open up a safe portal between the two planets at any time.

The following continents, lands and landmarks can be found on Popstar, though it is not always clear where all these places are relative to each-other, or if all these names refer to distinct locations. Some of these places also existed at one point, but no longer do: