Rekketsu[Japanese title] is a sword-wielding teacher monster who appears in the Kirby: Right Back at Ya! episode Teacher's Threat. He is sent by Night Mare Enterprises as a replacement for Mr. Chip - who failed to fulfill the terms of his contract - to attack Kirby. After a brief duel, however, Kirby gains the Sword Copy Ability from Rekketsu's bokken and then defeats him using a Sword Beam attack, destroying the Dedede Academy with him.

The Japanese name of this monster is used due to him being left nameless in the 4Kids dub.

Rekketsu is a large man with anatomy similar to Mr. Chip who wears a purple suit and samurai-style armband and headband. He has a cylindrical head with a flat-top hairstyle, a massive mouth with a mad smile, and featureless yellow eyes with heavy eyebrows. He wears white gloves and has black shoes.

Rekketsu fights using a bokken and later a laser sword. He is skilled with both, and also quite agile in combat. His most notable ability is stretching his arms out to extreme lengths in order to try and hit Kirby from a distance. Despite being described as a teacher monster, Rekketsu does not do any sort of teaching, nor does he speak. 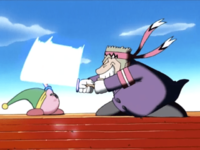 Rekketsu makes an appearance in Teacher's Threat, where he is summoned from a large blue orb by King Dedede in order to replace Mr. Chip and attack Kirby. Once he appears, Rekketsu immediately starts striking Kirby with his bokken, forcing the pink puffball to run away. Rekketsu then catches up and launches Kirby through a window, but stumbles when he tries to follow him outside, giving Kirby a chance to inhale his bokken and gain the Sword Copy Ability. From here, Rekketsu pulls out his laser sword and continues fighting Kirby. After a brief duel, Kirby manages to gain the upper hand and slice Rekketsu in half with a Sword Beam attack, defeating him and blowing up the academy in the process.