King Doo is a Mid-Boss debuting in Kirby's Return to Dream Land. He is a large yellow Waddle Doo with a pronounced tuft of hair and shoes with tips that point upward.

As expected from a Waddle Doo, he can use a beam whip attack, which appears essentially identical to a regular Waddle Doo's (though obviously much larger) which he can also use in the air after a jump. King Doo also has the Wave Beam ability, firing a large blast of energy sideways across the field. He also has one non-beam attack, which involves simply charging across the screen. Once defeated, King Doo can be inhaled for the Beam ability.

King Doo debuted in Kirby's Return to Dream Land as a Mid-Boss, behaving like a normal Waddle Doo but with additional moves such as charging at Kirby and using a Beam Whip mid-air. In Extra Mode, King Doo gains off-white skin and a deep red eye reminiscent of Zero's. In this form he gains the ability to turn while attacking in midair, as well as the ability to fire up to three Wave Beams in succession. He also gains an attack similar to the Beam Blast, jumping and firing several medium-sized shots diagonally downwards.

In Kirby's Return to Dream Land, King Doo can be found in the following levels and stages:

King Doo returns in Kirby: Planet Robobot. Here, he wears a metal suit. There is also an upgraded version of him known as King Doo 2.0.

His regular form attacks in a fixed order on loop as follows:

After losing around half of his health, he abruptly switches to a different set of attacks, beginning with these:

After that, he then attacks in this fixed order on loop as follows:

In Kirby: Planet Robobot, King Doo can be found in the following levels and stages (includes 2.0 variant):

King Doo appears three times in Team Kirby Clash Deluxe, with many new methods of firing his beam laser, but despite this, the strategy to beat him is much the same. 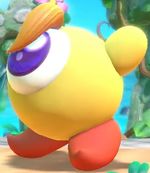 King Doo appears three times as an enemy encounter in Super Kirby Clash, behaving like he did in the previous game. Of these encounters, he is fought solo in only one Quest, with the other two having him paired up with other enemies: he is paired up with Mr. Frosty for Team First Contact and paired up with Hornhead and Miasmoros for Team Triple Threat.

The following are all of King Doo's attacks in Team Kirby Clash Deluxe and Super Kirby Clash. Note that attack names are conjectural: