Kirby's Dream Land 3 is a video game released for the Super Nintendo Entertainment System in the year 1997. This game is the direct sequel to Kirby's Dream Land 2, adapting many mechanics of that game and continuing the story of Dark Matter. This game was followed by Kirby 64: The Crystal Shards in 2000, which expanded further upon the ideas introduced in this game and its predecessor. In 2009, the game was re-released via the Wii's Virtual Console service. It was later re-released in 2012 with other Kirby games in Kirby's Dream Collection, and again in 2013 as part of the Wii U's Virtual Console service. It would also be released in 2019 on the Nintendo Switch as part of Nintendo Switch Online.

Kirby's Dream Land 3 continues the central concept of its predecessor by featuring only eight basic copy abilities for Kirby to acquire, but allowing him to pair these abilities with one of his Animal Friends for a different effect. Instead of just three friends, however, Kirby has access to a total of six, with each one offering a different set of strengths and drawbacks, as well as providing unique combinations when paired with an ability. Kirby also has access to an expanded move-set, which includes the Slide technique, the Headbutt, and the Dash. In addition, a second player can join in as Gooey, who can be called forth from inside Kirby's mouth at any time, and has nearly all of the same skills, including the copy ability and the ability to pair with animals. If no second player is available, Gooey can be directed by the CPU to act as a helper similar to the ones in Kirby Super Star. 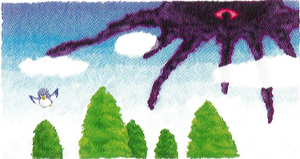 In Kirby's Dream Land 3, Dark Matter invades Popstar and implants itself in the center of the planet, as shown in this illustration from the manual.

The setting of Kirby's Dream Land 3 is Popstar, Kirby's home planet. During the introduction scene, Kirby and Gooey are seen having fun during a fishing trip.[2]

However, while they enjoy the seemingly peaceful day, a black cloud appears in the sky. The black mass enters Popstar's atmosphere, thereby shattering its rings, and quickly spreads over the whole planet.[3] Those who come in contact with the cloud get possessed by it, a fate that befalls many of Popstar's denizens, even including King Dedede.[4]

As the cloud's activity commences, Coo the owl arrives and hastily notifies Kirby and Gooey of what is going on. [5] The two can only watch from a nearby hill as the cloud conquers Popstar. Together with his friends from Kirby's Dream Land 2 (Rick, Kine and Coo) and three new friends (Nago, ChuChu and Pitch), Kirby sets out on a journey to free their home from the clutches of the intruder.[6]

Kirby and his friends travel through the five main areas of Popstar, helping many citizens along the way, and fighting to free those under the cloud's possession, gaining a Heart Star through every deed. When they liberate the last area of Popstar, the planet is saved, but the origin of the intruder's power still remains and hangs in the sky, gazing down upon the heroes.

When Kirby has collected all 30 Heart Stars, he enters the Hyper Zone and fights Dark Matter, who was controlling the clouds. The Heart Stars all combine together to create the Love-Love Stick, which Kirby wields during the combat. The two of them engage in a battle as Dark Matter's master reveals itself: Zero. Kirby manages to defeat Zero and expel Dark Matter and the dark clouds from his home. 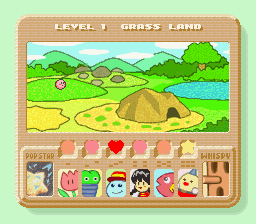 The stage selection screen for Grass Land, the first level of the game.

Kirby's Dream Land 3 is a two-dimensional platformer game, which can be played by two players simultaneously. The game begins on the map screen showing Popstar taken over by Dark Matter. From the map screen, the player can choose one of the five levels to enter. In the beginning, only level one is available, and every following level is unlocked after the boss of the preceding level is defeated. The levels themselves are displayed on their own map screens and are divided into six regular stages and a boss stage, again played and unlocked in sequence. 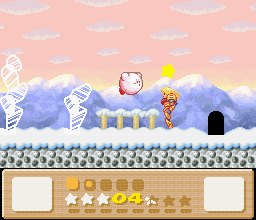 At the end of every stage someone is waiting for Kirby.

To complete a level, the player needs to play through all the stages and defeat the boss at the end, causing the next level to be available. Additionally, each stage Kirby visits contains a Dream Lander waiting at the end and a specific errand that needs to be completed. If Kirby manages to complete whatever errand has to be done in the stage, the character at the end will reward him with a Heart Star. Heart Stars are not needed to complete the game, but if Kirby manages to collect all of the Heart Stars of every level, the final boss and the true ending to the story will be unlocked. 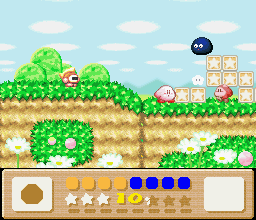 While playing a stage, Kirby can be controlled and moved around via the Directional Pad. The B Button causes him to jump, while consecutively pressing the button in the air makes him hover. The Y Button can be used to inhale enemies and to spit them out again. An inhaled enemy can be gulped down by pressing down on the Directional Pad after inhaling. If the enemy possesses an ability, then Kirby will obtain this Copy Ability after gulping the enemy down. The Copy Ability can then be used with the Y Button, or ditched with the Select Button. Eight such Copy Abilities are available for Kirby to use.

A press of the A Button lets Kirby summon his friend Gooey to assist him during stages. Gooey possesses skills very similar to those of Kirby, and he too can copy abilities. If any button on a second controller is pressed, a second player will gain control of Gooey. The second player can use the X Button to return to where Kirby is standing. Summoning Gooey costs Kirby some of his health, however, but he can regain this by inhaling Gooey and gulping him down again, which removes Gooey from play until called again. 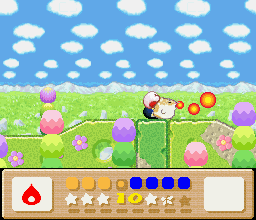 Kirby's life energy consists of ten life points, represented as five bars which can appear in half increments. When Gooey is summoned, the maximum capacity of the health meter shrinks down to four bars to make room for Gooey's health meter, which also consists of four bars. Whenever a character gets hit by an enemy or an environmental hazard, his health goes down by half a bar. Kirby and Gooey can replenish lost health by eating food or Maxim Tomatoes. Kirby may also swallow Gooey to regain one life bar. When Kirby falls into a bottomless pit, or when his life meter drops to zero, he loses a life and his current Copy Ability. If he runs out of extra lives, the game ends.

Kirby and Gooey can only copy eight different abilities, a relatively small number when compared to other games of the Kirby series. This is augmented by Kirby's various animal friends, who can be picked up while traversing stages and be ferried between them. Each of these six friends can accompany Kirby and/or Gooey and help him with their specific skills. The animal helpers also modify the protagonists' Copy Abilities, thus creating a new ability. When including these augmented abilities, there are 56 different methods of attack in the game, not counting the special ability Kirby and Gooey obtain during the final fight in Hyper Zone.

Gooey has most of the same moves as Kirby with the addition of the following:

These enemies appear littered throughout stages, and provide no Copy Ability if swallowed by Kirby or Gooey.

These somewhat less-common enemies provide Copy Abilities, which can be used in tandem with the Animal Friends for even more possible attacks, as well as to solve puzzles.

Each mid-boss has 128 HP. For reference, a Star Bullet deals 32 damage, and a Blaster Bullet (at least 2 stars swallowed) deals 64 damage in this game.

The following is a list of staff who have worked on Kirby's Dream Land 3:

Kirby, Dream Land's resident hero (and everyone's favorite puffball), must once again save the day when the mischievous King Dedede starts causing trouble. Kirby must travel through an assortment of levels, battling an exotic array of enemies (both new and familiar) determined to stop him from completing his mission. Always armed with his trusty ability to swallow enemies and gain special attacks, Kirby can also unite with some of his animal friends and make use of their particular talents. Featuring detailed graphics, challenging boss battles, and the distinct charm of a Kirby game, it's no wonder this title is considered a classic.

(This description was reused for the game on Super Nintendo Entertainment System - Nintendo Switch Online.)

Glide along, smoothly and easily!

In this special version of Kirby's Dream Land 3, all secret modes are unlocked. When the original version was released in Japan in 1998, the Japanese website read, "Games these days are difficult. Wouldn't you like to glide along smoothly and easily? The wait is over, because Kirby is back, and he's ready to play with anyone and everyone!"

Kirby and his friends are on a mission to save PopStar, but in this special version, Kirby's already glided in to save PopStar and has easily achieved a 100% completion rate. All of the stages are available, but that's not all. You can also listen to all the songs from the game in SOUND TEST under OPTION, or you can play Super NES MG5 (in which you play the five mini-games in a row, one after another), Jumping, and Boss Butch! With everything cleared, you can even view all of the event scenes and each of the three endings.