Dedede's Drum Dash is a Sub-Game in Kirby: Triple Deluxe where the player controls King Dedede in a rhythm-based challenge involving bouncing along drums, collecting coins, and avoiding enemies to the beat of the music that is playing. There are a total of three normal stages and an extra stage that must be unlocked, with each stage being faster than the last. Clearing a stage gives a medal depending on how many points were earned, ranging from bronze up to platinum. Points are earned in stages by collecting coins, completing the stage quickly, and clapping at the peak of each jump (a move referred to as a Backbeat). If King Dedede takes damage, points are lost, and he can only be hit a certain number of times before being defeated and failing the stage, unless he falls into a pit in which case he is immediately defeated.

A standalone expanded version of this game for the 3DS eShop titled Dedede's Drum Dash Deluxe would later be released that has more stages and other added features. 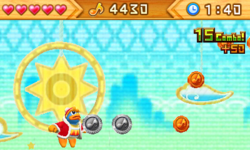 A screenshot from Miiverse showing gameplay in the first stage of Dedede's Drum Dash. Note that this is only the upper screen.

Dedede's Drum Dash involves King Dedede hopping along a series of big drums which make up the topography of each stage. There are essentially only two ways to control Dedede as he moves across the stage, as follows:

To move forward, King Dedede has to jump across the drums and head toward the right, with the player needing to make the decision of how high King Dedede ought to jump and where he will land afterward in order to collect coins and avoid danger, such as colliding with enemies and hazards or falling into the bottomless pit between the drums. The lowest jump height will keep King Dedede in the bottom screen of the 3DS, while the upper two launch him into the higher screen, so the player will need to keep eyes on both screens while playing. The pace of each stage is dictated by the tempo of the music playing in the background, with each subsequent stage being faster than the previous.

King Dedede has five points of health (three in the last stage). Each time he collides with a hazard or enemy, he will lose one HP, and will be defeated if he loses all five. If he falls into the bottomless pit below, he will be immediately defeated.

The following enemies appear in Dedede's Drum Dash, and must generally be avoided:

The following are notable objects and hazards that need to be contended with: The objective of Dedede's Drum Dash is to earn as high a score as possible on each stage, which naturally includes reaching the end of the stage in order to have those points saved. Points are earned in the following manner:

At the end of each stage, there are four bonus objectives that, if met, will provide an extra 1000 points each. They are as follows:

The only way points can be lost during a stage is if King Dedede takes damage, incurring a 100 point deduction.