This article is about the evil former Star Warrior ninja, and should not be confused with Benikage.

Yamikage[Japanese title] is a minor villain and former Star Warrior in the anime series Kirby: Right Back at Ya!. He is a master ninja, and betrayed the Star Warriors to fight alongside Night Mare Enterprises for reasons unknown. He appears only in the episode Ninja Binge to challenge Benikage and Kirby and recover a ninja scroll for King Dedede.

Yamikage is a grape-shaped creature with a body plan similar to Meta Knight, though with more defined legs and feet. He wears a dark ninja suit which covers most of his face, revealing only a featureless pair of red eyes with a small scar underneath his left eye. He has a large tuft of tied hair which protrudes from the top of his head. He carries a sword and several deadly knives and throwing stars.

Not much is known about Yamikage's personality, but Meta Knight describes him as a terrible person and a traitor. Despite his inclination towards killing his opponents, he has a code of honor which forbids him from stealing, excepting cases such as ninja scrolls. Yamikage is skilled in ninja arts, but he is brash and cocky, which allows Ninja Kirby to gain the upper hand and defeat him in battle. 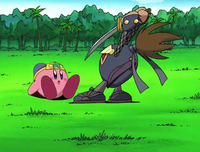 Yamikage attempts to kill Ninja Kirby in a duel.

Yamikage is first mentioned in Ninja Binge by Meta Knight, who relays the story of how he betrayed the Star Warriors and helped to wipe them out during the war against Night Mare Enterprises. Yamikage is called to Dream Land by King Dedede, and given orders to retrieve a ninja scroll which the King had formerly stolen, believing it to contain valuable ninja knowledge. Yamikage engages first Benikage, then Ninja Kirby to obtain the scroll, and successfully delivers it into King Dedede's hands, but is defeated by Kirby in the process. He vows revenge before making his escape.