This article is about Ball, an Ability from Kirby's Adventure and its remake, and should not be confused with Ball Kirby.

Ball is a Copy Ability appearing rarely in the Kirby series. By using it, Kirby can transform into a ball-like form, enabling him to bounce and roll, harming enemies he bounds into.

Ball can be a tricky ability to use, as the timing for damaging enemies with it can be rather strict at times. Pressing the B button transforms Kirby into ball form. From here, he can roll around or bounce when the player holds the A button. Successive bounces while the button is held can gain considerable height, and Kirby is able to harm enemies when he is sparkling while bouncing. Pressing B again reverts Kirby to normal. 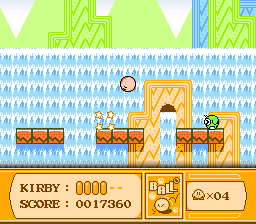 Kirby making use of the Ball ability in Kirby's Adventure.

The ability made its first appearance in Kirby's Adventure and returns in its remake, Kirby: Nightmare in Dream Land. It can be acquired by either inhaling Bubbles or the various baseballs painted by Paint Roller during the boss battle against him. Although Kirby's appearance does not change while in possession of the ability in Kirby's Adventure, he sports a rubber band-like visor when not in ball form in Kirby: Nightmare in Dream Land.

In several games, such as Kirby's Pinball Land, Kirby's Block Ball, and Kirby: Canvas Curse, Kirby is depicted without limbs in ball form. However, these appearances should not be confused with the Ball ability proper, as Ball Kirby is taken to be default Kirby in these games.