This article is about the character. For the main game in Kirby Super Star and its remake, see Dyna Blade (main game).

Dyna Blade is a giant, metallic, rainbow-winged bird who serves as the final boss and namesake of the Dyna Blade game mode in Kirby Super Star and its remake Kirby Super Star Ultra. She roosts atop Candy Mountain in Dream Land, and tends to cause havoc across the countryside whenever she is angered. In the Dyna Blade game mode, Kirby is tasked with putting a stop to her attack on Dream Land's crops, but soon comes to realize that she was only trying to feed her chicks. The two eventually become stalwart allies, and Dyna Blade later helps Kirby board the Halberd in the Revenge of Meta Knight game mode.

Since her debut in Kirby Super Star, Dyna Blade has made several subsequent appearances in the Kirby series, though seldom as more than a cameo appearance or other small role. She has also appeared a couple of times in the Super Smash Bros. series. In addition to her appearance in the games, Dyna Blade is also a side character in Kirby: Right Back at Ya!. Dyna Blade is generally understood to be female, but several bits of flavor text erroneously refer to her with male pronouns. 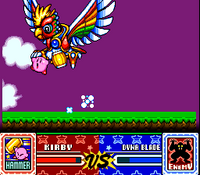 Dyna Blade using her talons to grab Kirby during her boss fight.

In Kirby Super Star and its remake, Dyna Blade has a main game named after her. In this game, Dyna Blade disrupts the crops by slicing them down using her wings, then making off with the harvest. After Kirby discovers this, he sets off to retrieve the stolen goods. Once he makes it through the Candy Mountain stage, he reaches the final stage of the Dyna Blade game and ends up battling her at her nest. She fights by swooping in from the background, striking with her beak, and attempting to grab Kirby with her talons.

Surprisingly, it turns out that Dyna Blade stole the food only to feed her chicks, as opposed to King Dedede's more gluttonous reasons. After Kirby helps Dyna Blade find a better food source, Dyna Blade befriends him and aids him in Revenge of Meta Knight, flying him onto the Halberd's deck after he's knocked off of his Warp Star.

Dyna Blade is also fought in The Arena as one of the first set of randomly-fought bosses. In Kirby Super Star Ultra, Dyna Blade appears on a card in Kirby Card Swipe.

Dyna Blade is distinct as a boss in Kirby Super Star and Kirby Super Star Ultra, due primarily to her aerial attacks and her large imposing presence. She attacks primarily with her wings, talons, and beak, but also has the ability to breathe fire. If Kirby has no ability, he can fight back by inhaling the Drop Stars that appear whenever she lands or by inhaling her fire balls and spitting these back. Only her head can take damage; hitting her anywhere else does nothing.

The following are Dyna Blade's attacks. Note that attack names are conjectural. 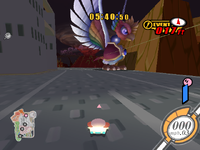 Dyna Blade appears in one event in the City Trial mode of Kirby Air Ride. During this event, Dyna Blade will fly in and land in a predetermined, though randomly selected location within the city, with her size being comparable to the larger buildings. She will harm any racers who touch her but can be attacked by flying into her head, which will cause her to drop items of various value, usually Patches or Food. Dyna Blade will fly off and land in one other location given enough time. After being damaged sufficiently or a short time after her second landing, she will fly off and the event will end.

Notably, the in-game flavor text for Dyna Blade refers to the character using male pronouns, which is inconsistent with the rest of the series and likely a mistake. 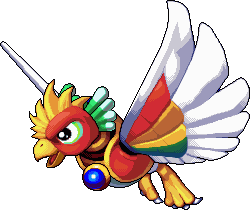 Dyna Blade appears in one of Kirby Mass Attack's Sub-Games, Kirby Quest, as one of Kirby's 'Awesome' attacks. For the attack, she dives towards the enemies, hitting all of them in one big swooping motion.

In Kirby: Triple Deluxe, Dyna Blade appears as a rare Keychain, depicting her in sprite form from Kirby Super Star. Her Keychain can be found in Fine Fields - Stage 2.

In Kirby: Planet Robobot, a randomly-obtained sticker depicting Dyna Blade's head can be found, based on artwork from Kirby Super Star.

Dyna Blade makes a cameo appearance in Kirby Star Allies where she can be rarely spotted flying behind Castle Dedede in the distance in the first level: World of Peace - Dream Land. This cameo was added to the game in the 2.0.0 patch and can only be seen after the main game is completed.

Dyna Blade can be seen in the sky in the background on occasion from this vantage point in World of Peace - Dream Land. She appears as little more than a blurry silhouette, though her status as sole giant bird in Dream Land — and her texture in the game files — make it clear it's her.

In Super Kirby Clash, Dyna Blade appears as one of the stickers that can be purchased from Magolor's Shoppe, based on her artwork from Kirby Super Star Ultra. The sticker comes with the caption: *flap*.

Dyna Blade appears as a trophy and sticker in Super Smash Bros. Brawl. The Dyna Blade sticker can be equipped in The Subspace Emissary to increase launch resistance by 46 points, though it is only effective when playing as Kirby, King Dedede, or Meta Knight.

Dyna Blade appears as a ★★★★ defense-type primary spirit in this game. She can only be obtained by summoning her using cores from other bird-like spirits. She has level 1 stats of 2,325 attack and 1,902 defense, while her level 99 stats are 5,813 and 4,756 defense. She has two support slots and will grant the paired fighter increased jump height.

Dyna Blade appears in the anime, Kirby: Right Back at Ya!, as a minor character, first appearing in the episode Kirby's Egg-Cellent Adventure.

Unlike most characters, she makes almost every appearance in 3D, with her specific character model being updated in later episodes. Dyna Blade is shown to be a legendary bird with metal wings and feathers, which explains why "blade" is in her name. She is said to be seen every 100 years. Unlike many other characters in the show, Dyna Blade does not have any speaking roles, though she is still fairly intelligent.

In her first appearance, King Dedede tricks Kirby into eating Dyna Blade's egg, which causes her to wreak havoc upon Cappy Town. However, it is found that Dyna Blade's chick had already hatched before being eaten, and she forgives Kirby. After that, she is rarely seen outside of small roles or cameo appearances, and the only other episodes which features her prominently are The Empty Nest Mess and Waste Management.

The following is a complete list of all of Dyna Blade's appearances in Kirby: Right Back at Ya!, along with other information regarding her role in each episode:

While Dyna Blade never directly appears in the Kirby novel series, she is mentioned in Kirby Meets the Squeak Squad!. She is known to be a very rare and legendary bird. Her crest feathers are treasures that many rich people have searched for, and they sell for tons of money. A very similar character called Acti Blade appears, who is capable of speech, is much less rare, and is not as burly. The theme of the two names could suggest they are derived from "dynamic" and "active".

In Kirby Meets the Squeak Squad!, obtaining one of Dyna Blade's crest feathers is King Dedede's ultimate goal. When Kirby first tells King Dedede that they must protect a large bird's egg, he only remembers that she had "Blade" in her name. At the end of the story, when the egg is returned to Acti Blade, King Dedede requests to pluck one of her crest feathers. He celebrates, and reveals that his true motivation was to steal a Dyna Blade crest feather and sell it for loads of money. Acti Blade informs him that she is a completely different species from Dyna Blade, and that her crest feathers are worthless, which angers Dedede.