This article is about the Copy Ability Fire, and should not be confused with the Burning ability, a similar fiery ability that was once called Fireball.

Fire is a Copy Ability which empowers Kirby to breathe a cone of flame from his mouth, which can be used to fight enemies, light things on fire, such as fuses, candles, or foliage, or break things made of ice. The range on Kirby's fire breath tends to be middling at best, but in some games, it can be extended and angled while held down. In Kirby Super Star and games that follow in its legacy, Fire Kirby has access to many other fiery attacks, such as igniting into a fireball (similar to the Burning ability), spinning in a fiery pinwheel along the ground, or even turning himself into a big pyre. In Kirby Star Allies, Fire Kirby can also empower some of his allies with the "Sizzle" Power Effect.

Fire is one of Kirby's oldest Copy Abilities, making its debut in Kirby's Adventure. When possessing the Fire ability, Kirby sports a golden tiara with a green/blue jewel embedded in it. Bright orange flames emerge from the headgear, and in many older titles, Kirby's color slightly changes, making him more red than pink. Kirby can typically obtain the Fire ability from enemies like Hot Head, Burning Leo, Galbo, or Flamer (when it doesn't provide Burning instead).

The Fire ability can be used to break away icy barricades, in addition to roasting Kirby's foes.

Fire is among the most elemental and ubiquitous abilities in Kirby's arsenal, and arguably more than any other is emblematic of his Copy Ability and how it gives Kirby expanded powers. In its simplest form, it allows Kirby to breathe fire from his mouth to deter opponents, thaw out ice, and light the fuses of cannons. While using this fire breath, Kirby is forced to hold still, and naturally it cannot be used underwater (a restriction that is not beholden to Burning Leo, Fire's main representative and helper). In later games, particularly those that follow Kirby Super Star's example, Fire would be given a much more versatile move-set, incorporating the fireball of Burning among other more specialized attacks. The main fire breath ability would also be upgraded, allowing Kirby to angle and direct his fire breath to an extent. Fire would also be given more utility in later games, with the addition of environmental features that can be burned away such as tall grass and dark areas that can be momentarily lit up using the ability. Being an elemental ability, Fire can be readily combined with other abilities and allies to create potent combinations, particularly in Kirby Star Allies.

As mentioned above, Fire's primary provider and representative helper is Burning Leo. Other common providers include Hot Head, Galbo, and (in appearances where Burning is not a distinct power) Flamer.

Fire first appears in Kirby's Adventure, the game which introduced Kirby's Copy Abilities, and also appears in its remake, Kirby: Nightmare in Dream Land. Absorbing a Hot Head allows Kirby to breathe fire at his enemies, defeating them at short range. In these games, Fire is distinct from Burning, which has Kirby rocketing forward as a fire ball instead. 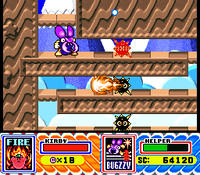 Fire Kirby using his "Burn" technique to pass through a Gordo unharmed in Candy Mountain, in Kirby Super Star

Fire is one of the Copy Abilities which racing Kirbys can use in Kirby Air Ride. When acquired, Kirby is able to spit fire balls which land on the course and remain as conflagrations which can trip up racers who ride over them for a short time. He will also damage any racers or enemies he comes in contact with. Like other abilities in this game, Fire only lasts for a short while before disappearing. 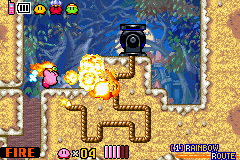 Fire Kirby lighting a fuse in Kirby & The Amazing Mirror.

In Kirby & The Amazing Mirror, Fire appears as an ability distinct from Burning once again, working like its appearance in Kirby: Nightmare in Dream Land, although this time Kirby can slightly aim the direction of his fire with the Control Pad, like in Kirby Super Star. It is once again mainly provided by Hot Head.

Fire makes a return in Kirby: Squeak Squad, this time without Burning accompanying it. As such, it is provided by Hot Head, Acchi, and Flamer (who previously provided Burning). Fire also inherits Burning's attack, making this appearance of Fire similar (though simpler) than its Kirby Super Star equivalent. Collecting the Ability Scroll for Fire allows Kirby to angle his fire breath up and down while using it. In this game, Fire can be used to melt certain types of metal blocks.

Fire reappears as an ability in Kirby's Return to Dream Land and its remake, Kirby's Return to Dream Land Deluxe, where it is obtained by inhaling fiery enemies such as Hot Heads, Flamers, and Galbos. It can also be obtained from rocks launched by the volcanoes in Dangerous Dinner. The Fire ability is required to light some fuses and launch Kirby from cannons to secret areas of stages, which may provide Energy Spheres. A super version of the Fire ability - called Monster Flame - also exists, and can be obtained by inhaling a Super Hot Head.

Notably, Fire is now capable of breaking metal blocks using the "Burn" technique, which was not possible in previous games that had that move in Fire Kirby's toolkit.

Fire returns in Kirby: Triple Deluxe, functioning almost identically to the way it did in Kirby's Return to Dream Land. However, it lacks Spinning Fire Breath and Burning Flame, though gaining two new moves: Fireball Jump and Searing Burn in their place. Like in Kirby's Return to Dream Land, the ability can be obtained from Hot Heads and Flamers, and it can now also be obtained from the Mid-Boss Flame Galboros and various boss attacks such as Pyribbit's flaming rocks. 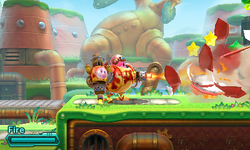 Kirby fusing Fire with the Robobot Armor to burn away some large obstacles on the road in Kirby: Planet Robobot

Fire returns in Kirby: Planet Robobot, functioning identically to the way it did in Kirby: Triple Deluxe. It is provided by Hot Head, Galbo, Flamer, and other enemies. When combined with the Robobot Armor, it results in a powerful Fire Mode which can shoot massive flamethrowers and leave conflagrations on the ground.

Fire returns as an ability in Kirby Star Allies, provided by Burning Leo, who also represents the ability as a Friend. Fire provides the Sizzle effect to certain other abilities, and can also be used in conjunction with Cleaning or Wing to perform Rising Sizzler. Fire also deals bonus damage when used against certain foes, such as Puppet Waddle Dee, Blizzard Guard, Whispy Woods and his relatives, and Francisca. Using Fire in conjunction with the Friend Star is also required to defeat Grand Mam in the Story Mode.

Fire Kirby appears in Kirby and the Forgotten Land. He can use his fire breath to light Lantern Switches which can make items appear in a similar manner to breaking a Bomb Block. He can also now gradually burn mid-bosses and bosses by continuously attacking them, dealing small amounts of damage to them over time, with the effects lasting longer and becoming more intense the more fire is used on them. Flames produced by Fire can also stay on the ground or another surface, and damage enemies that run into them. With the right materials, Kirby can go to Waddle Dee's Weapons Shop and evolve the ability into Volcano Fire and Dragon Fire.

In Kirby: Right Back at Ya!, the Fire ability is the first to be showcased, and is among the most commonly-appearing abilities in the series. True to the games, Fire Kirby's primary power is the ability to breathe a steady stream of fire from his mouth, which can be used to easily fell most foes, even those who are already fire-based. The only entities that Fire Kirby is completely ineffectual against are the monster Flame Feeder—who grows stronger from all sources of heat, Lobzilla—who counters with its own ice breath, and eNeMeE himself—who absorbs the fire breath into his cloak. Unlike in the games, Fire Kirby's powers are limited, as the fire emanating from his hat will gradually shrink and eventually disappear completely the more he uses the ability.

In Cartoon Buffoon, King Dedede attempts to place himself in the role of Kirby in the cartoon, even going so far as to give himself the Fire ability. When Meta Knight is urged to say his line on the matter, he balks, noting that even he could not make the name "Fire Dedede" sound cool. In Fossil Fools - Part II, the monster Kirbysaurus - made from Kirby's DNA - also momentarily gains the Fire ability. 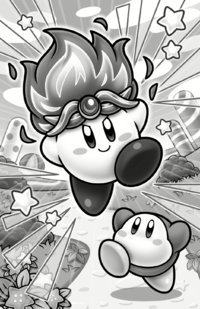 Kirby gains the Fire ability in Kirby and the Dangerous Gourmet Mansion?!

In the Kirby novel series, Fire is a recurring Copy Ability. It is also the first Copy Ability to be introduced to this series. Throughout the series, Kirby has obtained the Fire ability from Burning Leo and Fire Lion. This Copy Ability appears in Kirby and the Dangerous Gourmet Mansion?! and Kirby and the Big Panic in Gloomy Woods!. With this Copy Ability, Kirby has used Fire Breath to cook a cake of his, and made use of the glowing hat he gains to navigate a dark area.

In Kirby and the Dangerous Gourmet Mansion?!, after Burning Leo destroys the stove that Kirby set up, Kirby inhales him to obtain the Fire ability. Kirby then gets out the cake he had been preparing for the party, and uses his fire breath to bake it. After he finishes the cake, he tries a bite of it. Due to his terrible choice of ingredients, Kirby reacts by running around in havoc while spewing a large fireball. He then trips on a stone and loses his ability, which releases Burning Leo.

In Kirby and the Big Panic in Gloomy Woods!, Fire makes a brief appearance late in the story. When Kirby, King Dedede, and Meta Knight set out to catch the Woodkeeper in the dark Gloomy Woods, they encounter Fire Lion. King Dedede prepares to attack, but Kirby stops him, and says he has an idea of his own. Kirby inhales Fire Lion to gain the Fire ability. The flame crown on his head shines brightly, and he uses it to light the way to the Woodkeeper's hut. Noticing them, the Woodkeeper makes his small house convert into a helicopter. Kirby decides to try inhaling the flying hut. He drops his Fire ability, and Fire Lion flees.