This article is about the muscle-bound snake from Power Ploy, and should not be confused with Heavy Anaconda.

Red Viper is a huge athletic snake monster who appears in the Kirby: Right Back at Ya! episode Power Ploy. Red Viper is sent by Night Mare Enterprises in order to take advantage of Kirby while he is exhausted after burning out from using Pump-Up D and then being fed Power-Down E by mistake. At first, Red Viper has free reign to pummel Kirby as much as it wants and nearly succeeds in defeating him, but Kirby is given Chef Kawasaki's Stamina Stew at the last moment, allowing the pink puffball to regain his strength and promptly defeat Red Viper by slamming it into the ground repeatedly and then tossing it into the Sun using the Warp Star.

Red Viper is a very large anthropomorphic snake-like creature with beefy arms and scale patterns resembling a basketball jersey. Its colors are primarily green and red, with yellow markings that resemble the number 8. Red Viper also wears a pair of stylized red sunglasses.

Red Viper attacks by pummeling its target and then attempting to eat them. When attacking Kirby, it treats him like a basketball, dribbling him on the ground, tossing him, and slapping him with its tail. Once Kirby is powered-up, however, Red Viper's tail becomes its main weakness, as Kirby is able to grab the serpent there and toss it about. 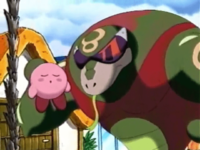 Red Viper catches Kirby while he is in a severely weakened state.

Red Viper appears in the episode Power Ploy, where it is sent to Dream Land by Night Mare Enterprises without King Dedede's prior consent in order to take advantage of Kirby and defeat him while he is worn out from overexertion after taking Pump-Up D. Suspecting trouble, Tiff and Tuff try to revitalize Kirby with more Pump-Up D, but they accidentally administer the anti-drink Power-Down E to him, which makes him even weaker. At that moment, Red Viper appears and attacks Kirby after knocking Tiff and Tuff away.

Tiff calls the Warp Star to try and help Kirby, but Kirby is too weak to mount it. After receiving several more hits from Red Viper, the snake prepares to finish Kirby off by gobbling him up whole, but Kirby manages to gather his last strength and pry Red Viper's mouth open. This gives Chef Kawasaki a chance to feed Kirby his remaining Stamina Stew - made with the last doses of Pump-Up D - to rejuvenate the pink puffball. Once powered up, Kirby kicks Red Viper away, then grabs it by the tail and starts slamming it into the ground repeatedly. From here, Kirby hops onto his Warp Star and carries Red Viper out into space, then tosses the monster into the Sun to destroy it.