Kirby: Canvas Curse (known as Kirby: Power Paintbrush in British English) is a spin-off game in the Kirby series for the Nintendo DS created by HAL Laboratory and Nintendo in 2005. In it, Kirby is turned into a ball by a sorceress named Drawcia, and he must travel through eight abstractly-painted worlds with the help of the Magical Paintbrush, controlled by the player's Nintendo DS stylus, in order to defeat her and return both Dream Land and himself to normal.

Unlike main-series installments, Kirby: Canvas Curse takes its own distinct approach to the platformer genre. The player has limited control over Kirby directly, and Kirby himself cannot move much on his own due to lacking any limbs. Instead, Kirby can roll forward with the help of magical Rainbow Lines drawn by the player, and can tackle enemies using the Touch Dash and his Copy Ability. Aside from this unorthodox play style, and other interactions that involve tapping the screen with the stylus, the goal is still to reach the end of the stage, much like other Kirby games.

A spiritual successor titled Kirby and the Rainbow Curse was released in 2015 for the Wii U. 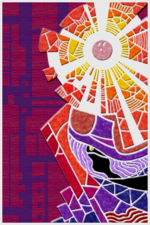 A mysterious witch transforms Kirby into a ball

Kirby is having a nice stroll in Dream Land, when suddenly the world's colors warp as a mysterious witch draws across the land, turning the entire world into a painting. Kirby chases the witch into a world of wild color and abstract art, and attempts to challenge her. However, the witch uses her magic to transform Kirby into a ball. Kirby finds himself helpless as the evil sorceress escapes, but he sees the witch's Magical Paintbrush and touches it, which "transports" to the player's hands (as the Nintendo DS stylus) via a ray of light.

Kirby then traverses seven different levels to reach The World of Drawcia, a strange world of grotesque paintings, and eventually confront the evil sorceress once more, who reveals herself as Drawcia. Despite being in ball form, Kirby is able to defeat Drawcia, and eventually her soul form, with the help of the Magical Paintbrush. Afterwards, Drawcia is forced back into a painting, which shatters into pieces. After Kirby's victory against this foe, he sadly parts ways with the paintbrush, which paints a portal for Kirby to return to his homeworld.

As he wakes up once again in Dream Land, Kirby finds himself and everything else back to normal, having broken free from Drawcia's curse. Then, a grand rainbow appears in the sky, presumably a gift from the magical paintbrush for Kirby's role in restoring the peace. 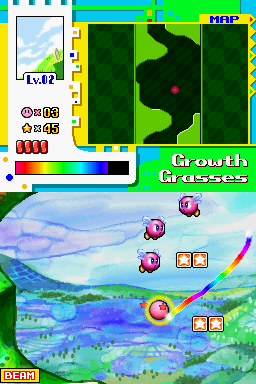 In order to get around the wide open stages, Kirby requires the help of a Rainbow Line, drawn by the player using the Magical Paintbrush, a stand-in for the Nintendo DS stylus.

Kirby: Canvas Curse is described as a "touch platformer", and has several key differences in its gameplay from traditional Kirby games. Due to having his limbs taken from him, Kirby is unable to move on his own in most cases. To help him out, the player uses the Magical Paintbrush to draw Rainbow Lines and tap Kirby along them. These lines can be drawn anywhere on the screen, excepting specific no-draw zones marked by magic barriers, but the paintbrush only has so much ink available before it runs out. To replenish ink in a reasonable time span, Kirby needs to touch the ground or another solid object. When Kirby is tapped, he will perform a Touch Dash which is his primary means of fighting enemies. The player can also help out more directly by tapping enemies with the stylus to stun them briefly. When Kirby crashes into a suitable enemy, he will gain a Copy Ability, which he can use to attack enemies, solve puzzles, or travel in a different manner.

The main game of Kirby: Canvas Curse consists of seven main levels with three stages that can be played in any order. Unlike in the main series games, the stages in Kirby: Canvas Curse make heavy use of unique devices and hazards, most of which can be interacted with using the stylus. Stages also generally feature much larger but fewer rooms which can stretch out in many more directions than is typically seen in other Kirby games. The stages also consist largely of abstract and/or surrealist art, with very few resembling real-world locations. In each stage, there are several Medals that can be collected to unlock bonus features in the Medal Swap menu. After all three stages of a level are completed, Kirby plays a Boss Game of the player's choosing in order to advance to the next level (excepting Level 7: Wonder Lilane, which immediately leads into The World of Drawcia instead). Due to the Sub-Game-like nature of the Boss Games, Drawcia and Drawcia Soul offer the only "true" boss fights in the game.

In addition to Kirby, the player also has access to a number of other characters which can be unlocked in the Medal Swap; these extra characters are King Dedede, Meta Knight, Waddle Dee, and Waddle Doo, each in ball form. Each of these extra characters has their own stats and attack strategies, though none can copy abilities. When playing as a different character, each one has to make their own progress through the main stages, with each one receiving a separate win screen at the end of the game.

The following characters can be played in Story Mode stages. Beating each stage with each character is necessary for 100% completion:

There are eight levels in the Main Game of Kirby: Canvas Curse, with the first seven of these featuring three stages each. Unlike most other games in the Kirby series, the stages within each level may be played and completed out of order. Much like the levels in Kirby's Adventure, each level aside from the final one is based on a different color of the rainbow, though in this case, they are arranged in "ROYGBIV" order instead of reverse order. Each first letter of the level name, when put up side-by-side, will spell out the word "RAINBOW". Once all three stages in a level are complete, Kirby may challenge a boss to move on to the next:

Kirby: Canvas Curse has a large cast of regular enemies. Unlike other Kirby games, there are no Mid-Bosses. 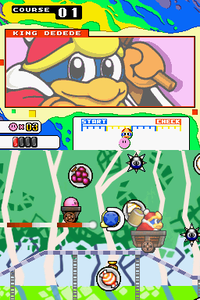 In Cart Run - one of the Boss Games - Kirby must race to defeat King Dedede in a mine cart.

At the end of each level, (except Wonder Lilane) Kirby faces off against a boss of his choosing. There are three initial bosses, and Kirby will have to face each one twice in a Boss Game (with the second time being tougher). From there, Wonder Lilane technically has no boss, but Drawcia is revealed (along with her level) after completing it. Her battle is the only one that can be considered a proper boss fight. The bosses faced are as follows: 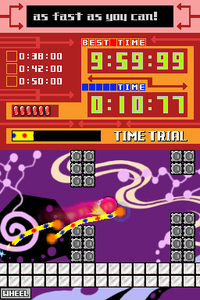 Kirby trying out the Wheel Course in Rainbow Run.

Rainbow Run is a mode in which Kirby tries to set a record for the time in going through a course or for the amount of line he uses to complete it. It uses levels 1 through seven and replaces level 8 with other courses where Kirby can only use a selected ability.

After completing the Boss Games in the Story Mode, they become available to play from the main menu as Sub-Games.[1] These games are similar to how they are in the story mode, but with a few minor differences. Game Overs will occur if Kirby either runs out of time or health.[2] In each game, there are three levels, with level 1 being the easiest and level 3 being the hardest. New Medals are only unlocked after achieving an A rank in Level 3.

This game also has a medal swap section, where Kirby can exchange the medals he earned in the game for lines, new levels in Rainbow Run, new songs, and even new playable characters.

At the end of each regular stage, a special Goal Game takes place where the character being controlled is rocketed off a launch ramp to try and gain as much distance as possible using a single Rainbow Line for assistance. Point Stars are earned based on distance traveled. This game becomes available for play from the main menu after completing the main game with every character.

The following is a list of staff who have worked on Kirby: Canvas Curse: