Chilly is a reoccurring enemy throughout the Kirby series. His basic appearance is that of a two-segmented snowman, with the bottom segment serving as the body, and the upper as the head. He commonly wears a cylindrical bucket atop his head, and a collar with a bell around his neck. He also has two black eyes with thick eyebrows. Chilly himself has never possessed an incredibly major role in any Kirby game, commonly appearing as a basic enemy or as a helper, and most notably giving Kirby the Ice or Freeze Copy Ability. He is usually, if not always, found in very cold or snowy areas. 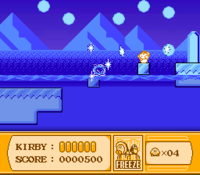 Chilly's debut was in Kirby's Adventure, as a common enemy, giving the Freeze Ability, and reappears in Kirby: Nightmare in Dream Land more-or-less unchanged. Just like the Freeze ability, Chilly attacks by creating a frozen barricade around himself, making it more difficult for Kirby to approach the snowman. Once Chilly appears, he will not attempt to move from his original position, only doing so if hit non-lethally.

Chilly's first appearance is not until Butter Building, and is a relatively uncommon foe throughout the rest of the game. Chilly can be found in the following levels and stages:

In Kirby's Pinball Land, a Chilly appears on the bottom level of the Poppy Brothers' Land stage. Attacking this Chilly eight consecutive times will defeat him and make a Warp Star appear, which can be used to return to the stage select area. 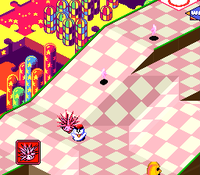 Needle Kirby parked next to a Chilly in Kirby's Dream Course.

In Kirby's Dream Course, Chilly gives the Freeze Copy Ability. Like many other enemies in the game, he remains stationary, and does not attack at all. In this game, his design is based on his Kirby's Adventure artwork: This is the only game where he uses this design.

In Kirby's Dream Course, Chilly can be found in the following courses:

Chilly appears in this game as a common enemy, worth 600 points on defeat. Chilly drops a Block Flip item once defeated. 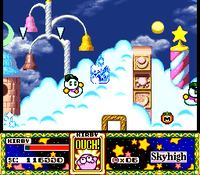 Kirby being frozen by a Chilly in Kirby Super Star.

In Kirby Super Star and Kirby Super Star Ultra, Chilly is the Helper for the Ice ability, where he can perform all the moves Ice Kirby can. As an enemy, he either blows ice breath or releases ice storms, similar to Ice Kirby. However, he is also capable of using one exclusive move, where he drops icicles down on Kirby. When operating as a helper, Chilly possesses all of Ice Kirby's moves. 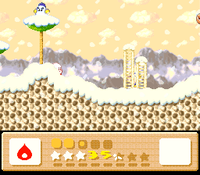 Chilly up in a tree in Kirby's Dream Land 3.

Chilly makes an appearance in this game, bearing a fatter squatter look with no bell, but otherwise serving the same purpose as before. Chilly tends to not move from his starting position, and will occasionally conjure a freezing aura around himself. He grants the Ice ability when swallowed.

In Kirby's Dream Land 3, Chilly can be found in the following levels and stages:

Chilly returns in this game, serving the same purpose as usual, but in 3-D. He grants the Ice ability when swallowed.

A large version of Chilly appears as a Mid-Boss in Stage 1 of Shiver Star. He sits in place and conjures a freezing aura around himself on occasion. He takes several hits to defeat.

Chilly can be found in the following levels and stages:

In Kirby Air Ride, Chilly can be found skating on the race courses, mainly on Frozen Hillside. Running into him will freeze the racer in an ice cube for about one second. Kirby can copy the Freeze Ability from him here.

In Kirby Air Ride, Chilly can be found in the following places: 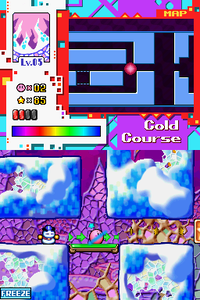 Chilly returns in Kirby: Canvas Curse, where he provides the Freeze ability. His behavior is the same as in other games he has appeared in.

In Kirby: Canvas Curse, Chilly appears in the following locations:

In Kirby's Epic Yarn and Kirby's Extra Epic Yarn, Chilly appears in yarn form in a few stages, mainly in Snow Land. He retains his usual style of attack, and if he hits Kirby or Prince Fluff with his freezing aura, they will momentarily be trapped in blocks of ice, which the player can free them from by mashing the 1 and 2 buttons.

Chilly can be found in the following levels and stages in Kirby's (Extra) Epic Yarn:

Chilly returns in Kirby's Return to Dream Land, mostly in the level White Wafers, a fittingly snowy place, though he first appears in Onion Ocean. He attacks simply by standing in one spot and using his Ice Storm. Chilly also occasionally moves back and forth, but doesn't tread very far from where he started.

In Kirby's Return to Dream Land Chilly can be found in the following levels and stages:

Chilly makes an appearance (unchanged in form and function from Kirby's Return to Dream Land) in the New Challenge Stages mode of Kirby's Dream Collection Special Edition, where he can be seen in a few of the chambers.

Chilly appears briefly in Kirby: Triple Deluxe, appearing in only a few places. He is unchanged from his appearance in Kirby's Return to Dream Land.

In Kirby: Triple Deluxe Chilly can be found in the following levels and stages:

Chilly returns in Kirby: Planet Robobot. He appears to be once again unchanged, and provides the Ice ability once again.

In Kirby: Planet Robobot Chilly can be found in the following levels and stages:

In Kirby Battle Royale, Chilly does not appear as an enemy, instead appearing in the audience for several battle modes, as well as in cutscenes.

Along with appearing as a common enemy, Chilly also is recruitable as a Friend. He can be controlled by the CPU or another player, and can help provide a Blizzard augment to other abilities.

When Chilly is recruited, his coloration changes based off his position in the team, and he also gains a hat similar to Kirby's Ice ability hat.

In Kirby Star Allies Chilly can be found in the following levels and stages: 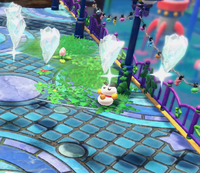 Chilly using his icicle spread attack in Kirby and the Forgotten Land.

Chilly reappears as an enemy in Kirby and the Forgotten Land. Here, his hat is a much darker shade of green than in previous games, and Chilly can once again make use of his icicle attack from Kirby Super Star, alongside his usual ice breath and ice storm attacks. Swallowing him grants the Ice Copy Ability.

In Kirby and the Forgotten Land, Chilly can be found in the following stages:

Chilly appears in Kirby: Right Back at Ya! as a monster created by Ice Dragon and ordered by King Dedede to assassinate Kirby. He attempts to do this covertly, pretending to be Kirby's friend while trying to do him in. After many failed attempts - one of which ends up with Kirby having to save him from melting in a pool - Chilly comes to pity the pink puffball, who remains none-the-wiser, and runs back to Ice Dragon instead. Because he did not kill Kirby, King Dedede orders Ice Dragon to stomp the snowman, but Kirby saves him in the nick of time, then they battle the Ice Dragon and save Cappy Town from freezing up. However, as the weather returns to normal, Chilly starts to melt away. Kirby tries in vain to save Chilly, but the poor snowman ends up melting on an iceberg out in the sea.

Chilly is portrayed fairly faithfully to his video game incarnation, but his cap is notably green in color rather than the usual blue (as was standard in the games at the time, though green-hat Chilly would become normal in games after this point). He cannot conjure a freezing aura around himself, but he is able to conjure snowballs from his hands. He is incapable of normal speech, able to only repeat his name.