Hot Head is a common enemy in the Kirby series who first appeared Kirby's Adventure. In every main-series game that he appears in, Hot Head gives Kirby the Fire Copy Ability when inhaled.

Hot Head is usually depicted as being orange-red, but is also found in other colors. He is about as tall as Kirby, and his physique consists of a main head-body with two stubby feet and no arms. His mouth is funnel-shaped, similar to octopus-like enemies such as Flotzo. He has a bright orange mane which often flickers like fire, making his incendiary nature fairly easy to recognize.

Hot Head attacks Kirby by either shooting a single fireball from his mouth at Kirby, usually done from a distance, or breathing out fire, which is usually done if he is near Kirby. Neither of these attacks are particularly quick, but they can catch Kirby off-guard if he is not paying attention. The fireball attack in particular is capable of being fired at many different angles, making it more potentially accurate than Shotzo fire.

When Hot Head is controlled by Ghost Kirby in Kirby: Squeak Squad: 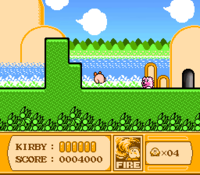 Kirby falling towards a Hot Head in Kirby's Adventure.

Hot Head made his debut appearance in Kirby's Adventure and also appears in the remake; Kirby: Nightmare in Dream Land. Here is where his signature look and abilities were first introduced, giving him both the ability to breathe fire at short range and spit a fireball at long range in Kirby's general direction. Here, he can come in many different colors.

Hot Head can be found in the following levels and stages:

Kirby leaping at a Hot Head in Kirby & The Amazing Mirror.

Hot Head appears in both Kirby & The Amazing Mirror and Kirby: Squeak Squad, with the exact same look and function as he had in Kirby: Nightmare in Dream Land.

In Kirby: Squeak Squad, Ghost Kirby can possess Hot Head. While possessed, Hot Head can be made to walk, jump, and use either his fire breath or his fireball spit to attack.

In Kirby & The Amazing Mirror, Hot Head can be found in the following rooms:

In Kirby: Squeak Squad, Hot Head can be found in the following levels and stages:

A Hot Head prepares to breathe fire in Kirby's Return to Dream Land.

Hot Head makes his debut appearance in 3-D in Kirby's Return to Dream Land. Here, he can come in various sizes when encountered in Extra Mode.

In Kirby's Return to Dream Land Hot Head can be found in the following levels and stages:

In Kirby's Dream Collection Special Edition, Hot Head appears as one of the enemies that can be encountered in the New Challenge Stages, retaining his Kirby's Return to Dream Land appearance. He also reprises his role in Kirby's Adventure.

Hot Head appears in both Kirby: Triple Deluxe and Kirby: Planet Robobot, gaining a slight visual update from his Kirby's Return to Dream Land incarnation. He gains the ability to shoot fireballs between the foreground and background.

A randomly-obtained keychain depicting Hot Head in his Kirby's Adventure likeness can also be collected in Kirby: Triple Deluxe.

In Kirby: Triple Deluxe Hot Head can be found in the following levels and stages:

In Kirby: Planet Robobot Hot Head can be found in the following levels and stages:

Hot Head appears as a somewhat uncommon enemy in Kirby and the Rainbow Curse, first appearing in Red Volcano. He spews a long-held cone of flame in front of him to block Kirby's path, though this can be blocked using the Rainbow Rope. Given the nature of this game, this is Hot Head's only appearance where he cannot provide a Copy Ability.

In Kirby and the Rainbow Curse, Hot Head appears in the following locations:

A Hot Head in Kirby and the Forgotten Land

Hot Head returns as an enemy in Kirby and the Forgotten Land. Alongside his traditional attacks of breathing a continuous cone of fire and shooting a fire ball from his snout, he can now also breathe fire in a circle around him and fire three fire balls at different angles. His design has been subtly changed from his appearance in Kirby: Planet Robobot, now having slightly smaller irises. He also appears as a figure, though it lacks a description.

In Kirby and the Forgotten Land, Hot Head can be found in the following stages:

In Kirby's Dream Buffet, Hot Head makes an appearance in sprite form on one of the Character Treats, depicting him as he looks in Kirby's Adventure. He does not appear in the game proper, making this the only time Hot Head has been referenced in a Kirby game without actually being in the game.

Hot Head makes a cameo appearance in Super Smash Bros. Brawl as a power-up Sticker for Adventure Mode: The Subspace Emissary. He can only be equipped on Kirby, King Dedede and Meta Knight and increase their Flame attack by 10.

Hot Head as it appears in Kirby: Right Back at Ya!.

Hot Head makes a tiny cameo appearance as a monster in the Kirby: Right Back at Ya! episode Cowardly Creature. He is shown briefly training as part of the "Young Monsters of the Future" program run by monster clowns, balancing an aerial ball over his head. Notably, he resembles his artwork from Kirby's Adventure.