This article is about the sword-wielding foe with the segmented helmet, and should not be confused with Blade Knight.

Sword Knight is a relatively obscure sword-wielding enemy in the Kirby series, wearing green or purple armor and wielding a spiked blade either white or golden in hue. First appearing in Kirby's Adventure, he makes a fair number of appearances in early Kirby games, and will grant Kirby the Sword Copy Ability when swallowed. Sword Knight is normally found in random areas, and is usually ranked as a minor enemy, but he tends to have more prestige (if nothing else) than his cousin Blade Knight, despite appearing less often. Sword Knight also appears in Kirby: Right Back at Ya! as an ally and an apprentice of Meta Knight. 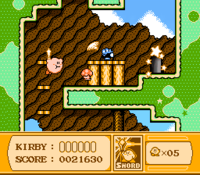 Sword Knight first appeared alongside Blade Knight in Kirby's Adventure. Here, he attacks Kirby with his sword, and can block most projectiles thrown at him. Kirby is granted the Sword Copy Ability when he swallows one.

Sword Knight can be found in the following levels and stages:

In Kirby Air Ride, Sword Knight returns in his only appearance in 3D (so far), riding on a hoverboard. If Kirby approaches, Sword Knight will swing his sword wildly at him until he passes. Unlike most enemies in the game, Sword Knight rarely appears in a large group. At most, two or three might appear at once to gang up on Kirby.

Notably, two Sword Knights appear to antagonize Kirby in the game's opening cutscene. Kirby quickly dispatches them with the Sword Ability before moving on to face Meta Knight.

In Kirby Air Ride, Sword Knight can be found in the following places:

Sword Knight appears in both of these games, looking and acting exactly as he has in Kirby: Nightmare in Dream Land.

When possessed by Ghost Kirby, Sword Knight can be made to walk, jump, and perform both standing and dashing slashes with his sword. He can do three different swipes with his sword while standing, though these differ only in look.

In Kirby & The Amazing Mirror, Sword Knight can be found in every major area of the Mirror World except for Radish Ruins.

In Kirby: Squeak Squad, Sword Knight can be found in the following levels and stages: 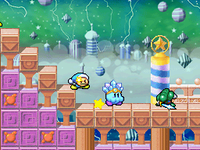 Sword Knight does not appear in Kirby's Dream Buffet directly, but his artwork from Kirby's Adventure is used for one of the Character Treats.

Artwork from Kirby: Right Back at Ya!

In Kirby: Right Back at Ya!, Sword Knight is an assistant of Meta Knight, and has the same basic job as Blade Knight. In the English dub, he speaks with a British cockney accent, and is the only one of the two who can be understood clearly.