This article is about UFO as a Copy Ability. For other uses, see UFO (disambiguation).

UFO, also known as U.F.O., is a Copy Ability which transforms Kirby into flying saucer. It is obtained by finding the rare UFO enemy which typically appears in hidden rooms throughout the series.

The UFO ability usually has an attack which changes depending on how long the attack was charged.

The UFO ability can move through water and will not convert into a regular Kirby with goggles like with other abilities. UFO Kirby cannot drop through thin floors or use Ladders except in Kirby: Planet Robobot.

The U.F.O. ability first appeared in Kirby's Adventure. It can be obtained by swallowing the UFO who appears only once in certain areas, usually hidden rooms. When Kirby has this ability, he transforms into a flying saucer and can fly freely around in the air without being affected by gravity. It fires Star Bullets / Blaster Bullets with medium/max charge in this game. The U.F.O. Blaster Bullets can destroy metal blocks but cannot travel through walls. Kirby will lose the U.F.O. ability once he returns to the stage hub. However, this can be circumvented using certain glitches.

The U.F.O. ability reappears in Kirby's Dream Course. It is gained by defeating the UFO enemy. When used, Kirby can freely fly around laterally while maintaining his height off the ground, but will be forced to come down after 10 seconds. The ability will be canceled early if B is pressed or if Kirby hits a bumper or wall.

Notably, while Kirby can float OB and fly off cliffs while using this ability, he will still move up and down slopes like normal if he is touching them. Additionally, the speed at which the UFO travels is dependent on how quickly Kirby was moving prior to transforming.

Kirby using the UFO's Chain Beam attack to bust through a barricade in Kirby & The Amazing Mirror.

The U.F.O. ability reappears in Kirby & The Amazing Mirror, where it uses the same assets from Kirby: Nightmare in Dream Land and functions mostly the same as its previous appearance.

When U.F.O. Kirby uses the Cell Phone, a small satellite dish is used instead. Kirby will lose this ability if he returns to Rainbow Route - Central Circle.

The U.F.O. ability reappears in Kirby: Squeak Squad, where it again uses the same assets from Kirby: Nightmare in Dream Land. The ability can now be used when leaving a stage. However, the ability's other attacks become considerably weaker and the Heat Beams lose the fire element in this title. When fighting Doc, he may occasionally drop his own personal UFO when stunned, which Kirby can inhale to gain the ability.

In Kirby Fighters Deluxe and its sequel Kirby Fighters 2, UFO Kirby is one of the enemies that can appear (in his original 8-bit form) on the Butter Building Battle Stage. Here, he will fly in and deposit a food item in the middle of the stage, either atop the thin floor or on the ground below. He will deal 12 damage to fighters on contact, and can be interrupted if defeated. 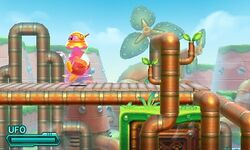 The UFO ability reappears in Kirby: Planet Robobot, where it is an extremely rare ability as the UFO enemy does not appear in the main stages. The ability is obtainable only by either scanning Kirby's amiibo (for Kirby: Planet Robobot) into the game, or by completing the game 100% to unlock the UFO enemy's appearance in the Copy Ability Testing Area. To obtain this ability in The Arena and The True Arena, amiibo must be used.

Here, UFO Kirby is as strong as it was in earlier games and has a larger move-set. Like in Kirby: Squeak Squad, Kirby can keep this ability when he leaves a stage. The ability also allows Kirby to drop through platforms, unlike in previous games.

When in a cut-scene, traversing the world map, traveling through a pipe, or using a Warp Star, Kirby assumes his normal form, and wears a special hat that resembles the UFO top.