Belly Buster[1] is a giant floating stomach monster covered in pie crust and custard which appears in the Kirby: Right Back at Ya! episode A Half-Baked Battle. It is called in by King Dedede from Night Mare Enterprises in order to pelt Kirby with pies that he cannot simply inhale. In its initial form, it tosses pies which taste so vile that even Kirby will not eat them, though it also becomes upset when people comment on how terrible the pies are. Later on, it sheds its outer pie covering and swallows the Royal Racecar with King Dedede, Escargoon, and Kirby inside. Belly Buster is then defeated after Kirby gains the Bomb Copy Ability and detonates many bombs from inside it.

Belly Buster has two principal forms. The first is as a giant floating custard pie with five arms carrying frying pans and a pair of dark red lips in the custard. In this form, Belly Buster has the power to conjure pies in its frying pans out of thin air, and then launching them at high velocity at its targets. These pies are universally regarded by Belly Buster's targets to taste terrible, with even Kirby refusing to inhale them. These comments cause Belly Buster to become furious, as it takes great pride in its pies.

The second true form of Belly Buster emerges after it crashes into the Royal Racecar. In this form, it is little more than a giant orange stomach with two red eyes. Notably, this form is larger than its initial one. It attacks by swallowing its opponents and digesting them.

In the Japanese version, Power Stomach speaks when it attacks, though it is only able to say words relating to pie.

Role in A Half-Baked Battle[edit] 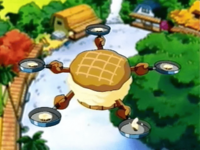 Belly Buster is called in by King Dedede after he initially fails to subdue Kirby and the people of Cappy Town during his new live revenge show "Pie Justice". After revealing itself, it starts by pelting Kirby in its pies, and then tossing more pies at everyone in sight, including King Dedede and his minions. Tiff at first is confused as to why Kirby will not inhale these pies like he did with Dedede's own pies before, but soon finds out when she tastes the custard and finds it revolting. As the others complain about the taste of the pies tossed at them, Belly Buster becomes furious, taking offense at its pies being so described. It renews its attack, and in particular tries to chase Kirby down. Kirby takes cover in the Royal Racecar with King Dedede and Escargoon, and Belly Buster then slams into the car with its body.

From there, Belly Buster assumes its true form and swallows the Royal Racecar with its occupants inside. To prevent themselves from getting digested, King Dedede and Escargoon pull out a bomb and give it to Kirby to grant him the Bomb Copy Ability. Using this ability, Kirby tosses many bombs inside Belly Buster's stomach, causing the monster to blow up from the inside and be defeated.