Needle is a Copy Ability that allows Kirby to protrude sharp spikes from himself, making its debut in Kirby's Adventure. It can typically be obtained by inhaling a Tick, a Togezo, or a Needlous, though there are other enemies that also provide it. Depending on the game, when Kirby uses this ability, he either generates the needles from his skin or from the hat he obtains, with the latter case also often allowing him to shoot the needles at opponents along with other prickly attacks. Despite being one of the original Copy Abilities and recurring regularly throughout the series, it does not appear as often as many others. 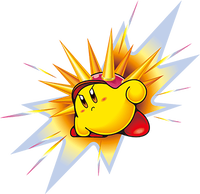 Artwork of Needle Kirby from Kirby: Nightmare in Dream Land

Depending on which game the ability appears in, Needle can have many different functions and utilities, with some games focusing more on its defensive aspects while others focus more on its mobility. Regardless of the particulars, Needle Kirby always has at least one basic move, which is to sit in place and protrude needles outward in all directions, damaging any enemies that touch them.

Up until Kirby's Return to Dream Land, Needle was always defined solely by that one move, though Kirby: Canvas Curse put a spin on it by allowing Kirby to do a rolling dash with it. In some games - most notably Kirby's Dream Course, Kirby's Block Ball, and the aforementioned Kirby: Canvas Curse - Needle Kirby can stick to surfaces in order to better control his movement. When Kirby's Return to Dream Land released, Needle Kirby finally gained an expanded Kirby Super Star-style moveset. Among these new moves were the ability to shoot larger needles upward or downward to attack more distant foes, roll up into a needle ball for a quick dash, or even shoot needles outward like projectiles, similar to some of the Animal Friend combinations in Kirby's Dream Land 2 and Kirby's Dream Land 3. In Kirby and the Forgotten Land, Needle was overhauled once again, this time placing a lot more emphasis on movement. In this game, Needle Kirby rolls toward enemies with his needles out and catches them, carrying them with him. He can then throw them at other enemies or obstacles when he retracts his needles.

Traditionally, Kirby would turn yellow when gaining the Needle ability, though this is not nearly as common in games from Kirby's Return to Dream Land and onward.

Needle makes its debut appearance in Kirby's Adventure. Kirby surrounds himself with needles, hurting any enemy that is too close to him. If Kirby is falling, the spikes hit enemies from below. Needle is provided in this game by the enemy Togezo.

Needle also reappears in the remake, Kirby: Nightmare in Dream Land. There, Kirby is colored yellow, and he wears a pink-colored cap filled with golden needles. This would be the first such appearance of this hat in the Kirby series (previously, it was introduced outside of the video games in the anime, Kirby: Right Back at Ya!). In this game, Needle is provided by the enemy Needlous, who has replaced Togezo from the original version.

Needle is one of the abilities in Kirby's Dream Course, provided by Togezo, where it has a primarily movement-oriented function rather than an offensive one. When Kirby activates the Needle ability, he can pin himself to any surface, preventing him from moving, bouncing, or sliding. This is handy to prevent Kirby from rolling too far or bouncing off a ledge. In the 2P Game, the Needle ability can be held through the other player's turn, and the other player will take 4 tomatoes of damage if he runs into the needles.

Needle reappears in Kirby's Dream Land 2, where it can be acquired from Captain Stitch and Spikey. By itself, this ability is similar to how it works in Kirby's Adventure, though Kirby has a more even spread of spikes that jut from his body and his limbs disappear while they are out. When on an Animal Friend, however, Kirby can perform variations of the ability, as detailed in the following table:

Throughout Kirby's Dream Land 2, there are specific blocks which can be broken only with the Needle ability. They are marked with a series of dots on them.

Needle appears in Kirby's Block Ball, obtainable from Spikey or an Ability Swap item. When Kirby has this ability, he can flare up in spikes, temporarily halting his movement (though not altering his course) when doing so. This can be used to break certain blocks and deal increased damage to bosses, though its most unique use comes with its ability to re-attach Kirby to a paddle when he uses it near one. Once attached, Kirby can be served as if he was starting a new ball or entering the area, granting much more control over where Kirby goes.

In Kirby's Dream Land 3, using Needle in conjunction with ChuChu causes the octopus to shoot pink spike projectiles in many directions.

Kirby using the Needle ability in Kirby 64: The Crystal Shards.

Needle Kirby returns in Kirby 64: The Crystal Shards, provided the enemies Tick, Ghost Knight, Kacti, and Punc. Here, activating the ability causes Kirby to flare up and then retract on a timer, rather than holding it for as long as the button is held down. Kirby also retains his aerial momentum when using the ability in midair, making it useful for attacking while on the move. Enemies that are hit by Needle Kirby will stick to him for a moment before being defeated, traveling with him if he is moving at the time. Like with other Copy Abilities in this game, Needle can be combined with others or itself to make Power Combos as follows: 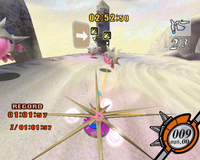 Needle returns in Kirby Air Ride, accessible when Kirby swallows Pichikuri or if he touches a Needle Copy Ability Panel or Copy Chance Wheel. If Kirby charges with the Needle ability, his spikes extend, hurting any opponent or enemy that is nearby, similar to the Freeze ability in this game. Needle Kirby will also automatically hurt any enemies or rivals that run into him while he has the ability. Like other Copy Abilities in this game, Needle only lasts a short time before it vanishes.

Needle is one of the few Copy Abilities that make an appearance in Kirby: Canvas Curse. If the player taps Kirby with the Nintendo DS stylus, Kirby turns yellow and spikes protrude from him. He can ride the Rainbow Lines and stick to walls, defeating enemies that touch him. Activating his spikes while riding a line can also give Kirby a momentary speed boost, allowing him to leap upward if going off a ramp. Kirby can receive this ability by colliding with Needlous or Tick.

Kirby uses the Mega Needle in a pre-release version of Kirby's Return to Dream Land.

Needle makes a prominent return in Kirby's Return to Dream Land and its remake, Kirby's Return to Dream Land Deluxe. Kirby can receive it by inhaling Needlous, Tick, or Totenga's head. Compared to its appearances in previous games, Kirby has more attacks at his disposal when using the Needle ability, but it still has less attacks overall than many other abilities in the game.

Needle appears again in Kirby: Triple Deluxe. The ability has had a few changes: the Rolling Needle attack was removed (most likely due to its similarity to the Wheel ability), and a new move was added. Needle Burst has also been given some changes, as the move now only fires 5 needles instead of 6, and no extra needles are shot out in mid-air, making it so that the move always fires 5 needles no matter the situation.

Needle Kirby catching enemies with a new rolling attack in Kirby and the Forgotten Land.

After an 8 year absence, Needle Kirby returns in Kirby and the Forgotten Land. Here, he gains the ability to roll along the ground with spines in all directions, catching enemies as he travels similar to Snow Bowl or Ice-Ice. In addition, Needle has a couple Evolved Copy Ability forms, those being Clutter Needle and Crystal Needle. Notably, when Kirby retracts his needles, any enemies or objects that were stick to him will be released, and can be flung as projectiles to hit other enemies or objects at a moderate distance. This "Roll up and Throw" technique can be used to solve certain puzzles, particularly in the Treasure Road stage Roll Up and Throw! Clutter Needle Trial. 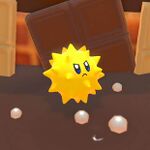 Needle Kirby makes another appearance in Kirby's Dream Buffet. Here, his appearance when using the ability hearkens back to earlier games in the series, since spikes that match his skin color pop out all over himself when he uses it instead of gaining a hat. He can charge up and perform a Needle Dash by pressing and holding the R button. In this game, the ability is acquired from the spiky Needle Candy found in Food Boxes, and can be used for only a limited duration.

Needle Kirby also appears on a Character Treat, using his artwork from Kirby 64: The Crystal Shards.

Needle appears as a Copy Ability in four episodes of the anime series Kirby: Right Back at Ya!. When Kirby acquires this ability, he gains several powers, many of which are not present in the video games. Needle Kirby is able to roll up into a ball, fling his needles out as missiles, and then guide them through the air as they slice through his opponents. Unlike in the games, Needle Kirby is not readily able to replenish his needles once using them, and often loses this ability quickly. In fact, the only enemy that Kirby defeats directly using his own needles is the Pukey Flower, and even then, Meta Knight still delivers the finishing blow.