Although only formally appearing in one game, Zero's legacy throughout the series is quite vast, as several subsequent final bosses would reference or resemble it, including Dark Mind, Magolor Soul, and Void.

Zero is a giant white sphere with a single red eyeball in the center. For some of its attacks, it spurts blood from red streaks on its body and from its eye. It also has the power to summon Dark Matter that charges forward. When Zero's initial phase is defeated, its eyeball emerges from its body and is fought on its own in the final phase of the battle; it is smaller, faster and continues to spurt blood, but loses its ability to summon Dark Matter. 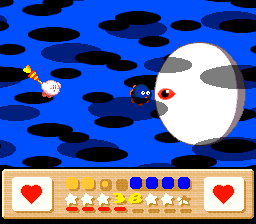 A portion of the battle with Zero

After forging the Love-Love Stick, Kirby and his friend Gooey fly into the heart of Dark Matter in an area called the Hyper Zone. There, after Kirby defeats Dark Matter, Zero appears out of nowhere and engages Kirby.

Zero has a number of attacks, but what makes it the most dangerous is its looming size. Zero's attacks are as follows:

To hurt Zero, Kirby must simply hit the boss with projectiles from the Love-Love Stick in his hands (32 damage per shot), though Zero takes many hits to defeat. Zero's first form has 4080 HP, which takes 128 shots from Kirby to defeat (or 160 shots if Gooey is in battle due to the 0.8× damage modifier for 2 players). Zero's first form has only 1 invincibility frame when getting hit so it's faster to defeat this form with 2 players.

Once it loses all its HP, Zero's eye rips out of its body in rather gory fashion and pursues Kirby as a last resort to defeat him. All Kirby has to do at this point is dodge and keep hitting it with the Love-Love Stick. In this form, Zero now has only 256 HP and takes 8 shots from Kirby to be defeated (or 10 shots if Gooey is in battle). Zero's eye has much longer invincibility frames, so it's recommended to battle with 1 player only. Defeating the eye of Zero finally defeats Zero itself and completes Kirby's Dream Land 3 with the good ending.

Zero appears as a sticker, based on his artwork from Kirby's Dream Land 3 (though shrunken down a fair bit).

Zero appears in the Celebration Picture "Bad Boss Brothers" alongside many other final bosses.