Taranza is a young, clumsy wizard with arachnid-like characteristics who serves as a prominent character in many games in the Kirby series. He first appeared in Kirby: Triple Deluxe when, on orders from Queen Sectonia, he kidnapped King Dedede in order to prevent him from foiling their plans to conquer Floralia. In the end, however, he realized he had captured the wrong target, as Kirby would pursue him all the way to the queen's chambers and defeat them in combat. Taranza would later be betrayed by his queen, and eventually come to Kirby and King Dedede's aid in dispatching her after she had merged with the Dreamstalk. From then on, he would be an ally to Kirby and King Dedede.

Since Kirby: Triple Deluxe, Taranza has made various appearances in subsequent games. In Team Kirby Clash Deluxe, he serves as one of the principal villains, and is battled directly for the first time in the series (he also serves as a more minor plot element in Super Kirby Clash). This is where he gained the moniker of The Puppeteer Magician. Taranza would become playable for the first time as a Dream Friend in Kirby Star Allies, though he does not serve a specific role in the game's story. He has also made minor appearances in Dedede's Drum Dash Deluxe, Kirby: Planet Robobot, and Kirby Battle Royale.

Taranza is a floating creature who greatly resembles a spider, and bears similar anatomy to Magolor. His body is divided into a head and a torso, which simultaneously resembles a spider's cephalothorax and abdomen. He has brown skin, and on his head he has eight eyes (one pair on his face, one pair on his forehead, and two pairs on the back of his head), a mouth with two visible fangs, silver hair, and orange horns that resemble pincers. Over his torso, he wears a red scarf with a green web-patterned cape. He has three pairs of disembodied, gloved hands. At the bottom of his torso, he has a stubby "tail", which resembles a spinneret. In Team Kirby Clash Deluxe and Super Kirby Clash, Taranza dresses in a dark color scheme due to the Black Mirror which was corrupting him, and possibly Parallel Nightmare's brainwashing, respectively.

The name Taranza is partially based on the name of the large spider family known as the tarantula. This is a possible misnomer however, as tarantulas are generally more passive than other spiders, as well as much hairier.

In the opening scene of Kirby: Triple Deluxe's Story Mode, Taranza is seen kidnapping King Dedede, mistaking him for the "Hero of Dream Land", and flies up the Dreamstalk with him. Afterwards, Taranza is seen in every stage containing a boss battle in the first five levels, fleeing from Kirby and making bosses fight against the pink hero. Taranza's acts include:

At the end of Royal Road, Taranza appears again and uses his magic to turn King Dedede into Masked Dedede and mind controls him to fight Kirby as the "Master of Puppetry". After Kirby bests Dedede, Taranza realizes his mistake in kidnapping Dedede rather than Kirby and calls for help from Queen Sectonia, who swats him away for his failures. At this point, Taranza decides to aid Kirby and King Dedede, gaining redemption in the process by tossing Kirby a Miracle Fruit to activate his Hypernova ability at a crucial point during the final battle with Flowered Sectonia. Afterwards, in the ending cutscene, Taranza rescues Dedede from his fall, and it is revealed that Taranza was ordered by Sectonia to kidnap the hero of Dream Land in order to prevent them from stopping her, but he mistakenly kidnapped King Dedede rather than Kirby. After the credits roll, Taranza waves at the player alongside Kirby, King Dedede and the People of the Sky.

In Dedede's Drum Dash Deluxe, Dedede can unlock the Taranza Mask after completing every secret level in the game. A hand-puppet version of Taranza also appears on title screen as part of various different interactions, and he appears in some of the trophies as well.

Taranza returns in the spinoff title Team Kirby Clash Deluxe, serving the role of the main antagonist and driving the various monsters to attack the Dream Kingdom. His ultimate triumph is in subduing and bending Landia the Guardian Angel to his will, who continues to fight even after he is defeated. It is later revealed that Taranza was being influenced by a powerful evil object known as the Black Mirror, and to return Taranza to a friendly demeanor, Team Kirby must destroy this mirror, dealing with everything it summons in the process.

Unlike in Kirby: Triple Deluxe, Taranza is fought directly as a boss in this title, serving as the fourth Ordeal boss. He floats around the battlefield, tossing magic energy at Team Kirby from the foreground and background. He is also capable of ensnaring the Kirbys in a magic net, rendering them useless for a time. His ability to float about and teleport makes him a difficult target for Team Kirby, but like other floating enemies, he is vulnerable to the Beam Mage's Time Beam spell.

Defeating Taranza unlocks the last series of encounters in all of the lands unlocked up to that point, eventually leading to the fight with Landia EX.

In this game, Taranza's model was updated from Triple Deluxe. Most notably, his mouth is now part of his model rather than a texture, meaning he can freely open and close it. His hair is similarly fully-modeled, and his scarf is longer, details which carry over to his future appearances. His color scheme is also altered to be primarily red and purple, though he returns to his original palette once he has been subdued.

The story is not over yet after Landia EX is defeated and the credits roll. Two invaders from Another Dimension strike the Dream Kingdom, namely Parallel Susie and Parallel Landia. After the two parallel invaders are defeated, the Black Mirror brings forth Taranza's evil counterpart, Dark Taranza. Team Kirby must fight Dark Taranza and his master in the true final battles.

After Team Kirby win the true final battles and eventually bring peace back to the Dream Kingdom, the friendly Taranza will stay in the town and sit on Magolor's Shoppe, looking at a flower in his hand in memory of his queen.

The following are all of Taranza's attacks in Team Kirby Clash Deluxe. Note that attack names are conjectural:

In Kirby Battle Royale, Taranza appears as a spectator in the Coin Clash Battle type.

In Kirby Star Allies, Taranza makes his playable debut as a Dream Friend in Version 4.0.0 of the game.

Taranza borrows much of his moveset from the Spider ability--including the Friend Bounce--but his webs are distinctly pink in color. In addition, he has many unique magic moves: Some are taken from his attacks in Team Kirby Clash Deluxe (e.g. Taranza Web Hold, Taranza Burst, Taranza Ball), and he can summon the illusion of Queen Sectonia dropping lightning bolts which can imbue his allies with the Zap element. Despite being based on an arachnid, his description refers to him as an insect.

The following table lists all of Taranza's moves in Kirby Star Allies: 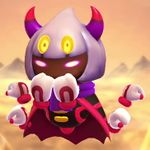 Taranza returns in Super Kirby Clash, his attack style and appearance carried over from his fights in Team Kirby Clash Deluxe. He serves as the fifth Ordeal of the game, though this time, he does not have quite as large a role in the story. Team Kirby battles him in the Empyrean, confusing him for Parallel Nightmare at first. Once Taranza is beaten, he appears in the Port Village and sits atop Magolor's Shoppe. Taranza is fought two more times in Party Quest encounters. This time, Dark Taranza does not appear alongside Taranza.

Taranza also appears as one of the game's stickers, which uses his artwork from Kirby: Triple Deluxe.

In Kirby's Dream Buffet, Kirby can take on Taranza's likeness using a costume and color which resemble him. Taranza also appears on a Character Treat, which uses his artwork from Kirby: Triple Deluxe.