This article is about the mid-boss who resembles a flaming lion, and should not be confused with Burning Leo.

Fire Lion is a Mid-Boss in Kirby's Adventure, Kirby: Nightmare in Dream Land and Kirby Super Star Ultra. It resembles a large, usually dark brown lion with angry, glowing eyes, long fangs and a mane entirely composed of flames, as well as a fiery tuft at the end of its tail.

Fire Lion debuts in Kirby's Adventure as a Mid-Boss, where it looks very different than in future appearances; it is depicted as a blue lion with a white mane, lacking both the glowing eyes and ardent characteristics. The game's remake, Kirby: Nightmare in Dream Land, however, depicts it with its modern design.

In battle, Fire Lion possesses three main attacks: It either launches itself at Kirby in the form of a large fireball, slashes at him with its claws, or leaps into the air and attempts to fall down on him, creating a star when it hits the ground, which can be inhaled and fired back at it by Kirby. Additionally, like most other Mid-Bosses in the game, it is able to jump up and down between attacks, making it harder to hit.

Fire Lion is one of the rarest Mid-Bosses in Kirby's Adventure and Kirby: Nightmare in Dream Land, being fought only twice (excluding Arena battles), once in behind the fifth door in Yogurt Yard and another time during the rematch with all of the game's Mid-Bosses behind door 2 in Rainbow Resort. Apart from these encounters, it serves as the opponent of Orange Ocean's Arena. 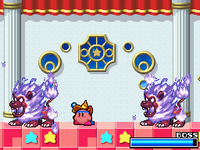 In Kirby Super Star Ultra, Fire Lion reappears, despite not being present in the original Kirby Super Star. Here, the Mid-Boss appears similarly as in Kirby: Nightmare in Dream Land and acts the same—the only notable difference being that it now yields the Fire Copy Ability due to Burning being absent from the game. It is initially encountered in Revenge of the King, first in the the Illusion Islands stage and then later in The Revenge where it is teamed up with another Fire Lion, occurring right after Phan Phan is defeated. Fire Lion also has to be bested in The True Arena, as part of the True Mid-boss All Stars round.

There is an unused second alternate palette of Fire Lion from the game. With GameShark codes, the player can make the lion with that palette appear in a level.

Despite Fire Lion not appearing physically in Kirby: Triple Deluxe, two of the regular Keychains that can be randomly obtained depicts Fire Lion. One of them shows Fire Lion in its Kirby's Adventure sprite, while the other depicts the "Twin Fire Lions" sprites from Kirby Super Star Ultra.

Despite Fire Lion not appearing physically in Kirby: Planet Robobot, there is a sticker based on the lion that can be randomly obtained. The sticker depicts Fire Lion from its Kirby Super Star Ultra artwork, but is cropped to only show its head.

In the anime Kirby: Right Back at Ya!, Fire Lion only makes a single appearance, being featured in the episode Junk Jam as a monster. Unlike its design in the games, it appears to consist entirely of fire, and it also possesses the ability to hover in the air and shoot fireballs from its mouth. After being brushed off by Night Mare Enterprises for not paying his bills, King Dedede hacks into the monster delivery system to obtain Fire Lion in order to have it incinerate all the trash that has accumulated in and around Cappy Town, but it gets out of control. Kirby eventually defeats the beast by turning into Fire Kirby and fighting fire with fire, inflating Fire Lion with his fire breath and tossing it into the sea, where it is destroyed by the water.

Fire Lion looks slightly different in the show than its official artwork implies, as it consists of the same fiery texture and color throughout and is constantly burning. 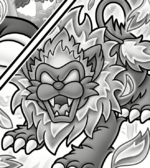 Fire Lion, as seen in Kirby and the Big Panic in Gloomy Woods!

Fire Lion appears as a cameo in the second volume of the Kirby novel series, Kirby and the Big Panic in Gloomy Woods!. Its physical appearance is largely identical to its most recent game design in Kirby Super Star Ultra.

Fire Lion appears as one of many beasts roaming around in the frightful "Gloomy Woods" area of Dream Land. It encounters King Dedede in the middle of the night there, alongside his companion the Woodkeeper, immediately preparing to attack, only for its natural built-in flames to be abruptly put out by Dedede's excessively loud yelling. It returns to the darkness of the woods then after. Later on, Fire Lion reappears with its flames yet again, this time encountering Kirby and Meta Knight alongside Dedede. Fire Lion is quickly inhaled by Kirby without a chance to make its attack, providing the puffball with the Fire Copy Ability. Fire Lion is lastly spat back out by Kirby later, allowing it to retreat back into the woods.

Fire Lion notably does not follow the usual Mid-Boss guideline in this appearance—normally, it has to be taken down first before being vulnerable to a regular inhale. Here, Kirby can inhale it right away just like any regular foe.