Doc is a member of the Squeaks serving under Daroach, who debuted in Kirby: Squeak Squad. He is easily the smallest of the named Squeak members, comparable to a Squeaker in size, but is distinguishable by his huge green mustache and stereotypical mad scientist goggles. He is often seen operating a flying saucer, which is indicative of his penchant for inventing and operating robots and other machines. Notable inventions of Doc include his flying saucer, Mecha-Kracko, Yadgaine, and Daroach's Airship. In Kirby: Squeak Squad, Doc is fought on several occasions as a Mid-Boss and twice as a boss using these various machines. Without a machine to pilot, he is helpless.

In Kirby Mass Attack, Daroach reveals that Doc is "a genius when it comes to machines" but is "getting on in years". While Doc himself never speaks in any of the games he is in, Daroach claims that he invented all of the Squeaks' gadgets, including the airship which Daroach uses in said game. 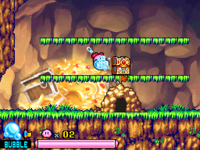 Kirby facing off against Doc in his flying saucer in Kirby: Squeak Squad

Doc appears alongside Spinni and Storo as a major enemy which Kirby will need to contend with in some stages once picking up a large Treasure Chest. He pursues Kirby in his flying saucer and will attempt to fire beams and drop bombs (which yield the Bomb Copy Ability) at him, causing Kirby to drop a chest if hit. Doc can then attempt to steal the chest using a claw from his saucer. If Doc is hit, he may drop a laser gun, which Kirby can swallow for the Laser ability.

If great damage is sustained, Doc will be ejected from his saucer, and left stunned for a while before hopping back into another one. If his saucer lands on the ground when this happens, Kirby can swallow it for the UFO ability.

Doc has 70 HP as a Mid-Boss, the lowest among himself, Spinni and Storo. Kirby's Star Bullet deals 40 damage per shot so Doc can be easily defeated by 2 Star Bullets.

In the case of two different mechanical bosses, Doc is shown to be the pilot, and is ejected from both when they are defeated. The bosses are:

In the former case, Doc is not revealed as the pilot until the first phase of the fight is over.

Doc appears in Daroach's Airship after Dedede Resort is cleared. While he can't be interacted with, Daroach mentions him in some dialogue.

Doc appears as a keychain in Kirby: Triple Deluxe, using his sprite from Kirby: Squeak Squad

In Kirby: Planet Robobot, Doc appears as a sticker for the Robobot Armor using his artwork from Kirby: Squeak Squad.

Doc as he appears in Kirby Star Allies

In Kirby Star Allies, Doc appears as part of Daroach the Dream Friend's moveset. When called upon, he orbits Daroach three times in his saucer while emitting a constant electric field. This field is capable of dealing electrical damage, activating Wires, and granting the Zap effect to allies.

In Kirby's Dream Buffet, Doc appears on one of the Character Treats, using his artwork from Kirby: Squeak Squad.

In the Kirby novel series, Doc appears as a supporting antagonist in Kirby Meets the Squeak Squad!. He is part of the Squeaks as one of Daroach's three high-ranking henchmen. Like the other three, Doc is extremely loyal to Daroach. He invents various machines that the Squeaks use, such as his UFO, along with a cannon that shoots Air Bullets. Doc is extremely passionate about his inventions, and feels immensely sad whenever one gets destroyed. He is usually seen flying in his UFO.

In Kirby Meets the Squeak Squad!, Doc helps Daroach steal the egg that Kirby and Waddle Dee are tasked with protecting. He first appears when Kirby first finds the egg at an ancient temple. He shows up with Storo and Spinni to ambush the two of them. He charges at Kirby in his UFO, but Kirby repels Doc by spitting fire at him with his Fire ability. After Kirby fends off all three of them, the Squeaks retreat.

Later on, Daroach plans to sneak in to Castle Dedede at night to snatch the egg, while everyone is asleep. Doc waits outside in his machine as their getaway. When Daroach and Spinni get out with the egg, they ride away on Doc's machine. Storo stays at the castle to deal with Kirby, who had woke up in the process. Kirby gets past him anyway, and catches up to them because Doc's remodel on the machine accidentally made it slower. Kirby fires an Air Bullet at Doc's machine, stopping it. Daroach commands Spinni and Doc to fight Kirby, while he runs off with the egg. Just then, Sparky enters to complain about all the commotion, and Kirby inhales him to gain the Spark ability. He gives Spinni and Doc a good shock, which causes Doc's machine to malfunction and fly away. With the two of them defeated, Kirby runs after Daroach.

When Kirby and co. are on their way back to the temple, Kirby pulls King Dedede and Waddle Dee in a cart with the Wheel ability. The Squeaks hide behind a papier-mâché boulder and plan to sabotage them with a cannon that Doc spent all night making. The cannon shoots Air Bullets like the ones that Kirby spits, to blow them away. Doc is confident in the machine because he tested it on Storo, who does not go down easily. However, the Air Bullets it shoots end up disappearing after going twenty inches, which does not even come close to reaching Kirby. They decide to push the cannon closer to their target. Kirby notices them, and rams into the air cannon, smashing it to pieces. Doc is devastated, but pulls himself together when Daroach tells everyone to continue after Kirby King Dedede, and Waddle Dee.

In the end, it is revealed that Daroach only wanted the cushion that the egg was strapped to. He had trouble falling asleep before, and wanted to take the cushion so he could use use it as a pillow. The mother bird forgives him for all the trouble, and allows him to keep it. With the Squeaks on good terms with everyone, they bid farewell and fly away in their airship.