Susshi is a land-dwelling fish monster which appears in Kirby: Right Back at Ya! in the episode A Princess in Dis-Dress. It acts as a surprise encounter for Kirby and Princess Rona, who must battle it in front of a large crowd after the Princess had defeated King Dedede in a sword duel.

Susshi is a giant red eel-like monster with a bulging body and tough scaly skin, with larger scales forming hexagonal plates on its body. It has large yellow eyes and a mouth full of small sharp teeth, though its main method of attack is jumping around and body-slamming its opponents. It also has a roar which can visibly distort the air in front of it, though this does not seem to be an effective attack. Susshi can resist strikes to its bulbous body, but the tail is its weak point.

Role in A Princess in Dis-Dress[edit] 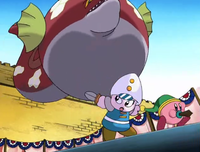 Susshi makes a surprise appearance near the end of A Princess in Dis-Dress, when King Dedede calls it in to battle with Princess Rona - who he still believes to be Commander Vee - after losing to her in a sword duel. Princess Rona and Sword Kirby engage the monster together. Learning from Chef Kawasaki's example at an earlier point in the episode, the two use their swords to fillet Susshi's tail, creating reams of raw monster meat that rain down in the area, killing the monster in the process.