The Goal Game is a small Sub-Game that takes place at the end of non-boss stages in most mainline Kirby titles, starting with Kirby's Adventure. In this game, Kirby has an opportunity to obtain bonuses, from simple points to helpful items such as Food and 1-Ups. The nature of the game varies depending on the title it appears in, but the premise is usually the same, to have the player press the A button (or other button, as appropriate) at the right time to obtain the desired bonus.

Reaching the top floor of the Goal Game in Kirby's Adventure.

Kirby and Rick in the Kirby's Dream Land 2 Goal Game.

The Goal Game in this title is largely the same as the one in Adventure, though Kirby will also smash into enemies and collect some items along the way.

There is a secret technique in Dream Land 2's Goal Game: By pressing ↑↓↑ + A before landing on the launch platform, Kirby will perform a super jump that always lands on the 1st platform.

Screenshot of the start of the goal game in Kirby Super Star.

The Goal Game here is only playable in the Dyna Blade portion of Kirby Super Star and Kirby Super Star Ultra. Here, three Kirbys man a cannon aimed toward the right. Firing it at the appropriate time - marked by a meter above the cannon - causes Kirby to shoot out, smashing into enemies along the way. If he travels far enough, he will also earn 1-Ups. 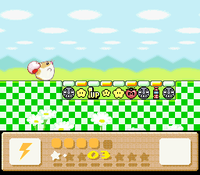 The Goal Game for Stage 1 of Grass Land.

In this title, Kirby stands to the left of a walkway, under which are various items. Kirby has to time his jump to land on a particular section of the walkway, in order to obtain the item directly beneath that section. Some of the items are duds, however, rewarding nothing.

If Gooey is playing, he can also play this game with Kirby. If they land on two different spots, they will obtain both items.

There is also a special Sub-Game called Jumping which is based on the Goal Game. Here, Kirby has to land on safe spots on the board in succession. If he lands on a spot with a Tick under it at any point, the game ends.

This Goal Game is similar to the one in Kirby's Dream Land 3, but instead involves a picnic, where Kirby has to jump to obtain a particular item on the mat. Kirby has to make two adjustments here, first to aim his jump, then again to determine how far to jump. If he does not land on an item, he will cry and obtain no bonus.

While not quite a separate game, there is a little strategy that can be employed when landing on the goal pad at the end of every stage (aside from boss stages) in Kirby Tilt 'n' Tumble. The goal pad resembles a blue dartboard, with an outer white square with four Sparkling Stars in the corners. Kirby immediately finishes the stage when he touches any part of this pad, but he will earn the following bonuses based on where he lands, as follows:

Kirby rides his Warp Star in the Goal Game for Kirby & The Amazing Mirror.

In Kirby & The Amazing Mirror, the Goal Game is reached through specific doorways in each large area of the world. From here, Kirby (and also possibly his clones) jump on Warp Stars and then fly through a vertical shaft of clouds. In this shaft are various items that Kirby will need to steer into to collect, along with obstacles that can cause him to momentarily lose control. The flight continues until the timer runs out, at which point Kirby lands on a cloudy platform and does his dance. From there, Kirby always returns to the main hub of Rainbow Route. 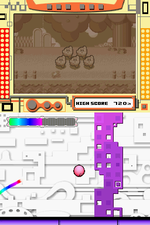 In Kirby: Canvas Curse, the Goal Game is known as Dash! Jump!. Kirby or any other character ball must increase their speed with several Touch Dashes, then use a ramp drawn using the Rainbow Lines to make a big jump and land a certain distance (measured in inches). For every 100 inches, Kirby will get 10 Point Stars, and a longer distance will net Kirby even more, as well as giving him 1ups.

This Goal Game consists of a spinning Cannon that Kirby is dumped into. On each firing line is a platform, some of which have bonus items on them. Kirby has to fire at the right time to obtain the desired bonus. The speed of the cannon is randomized every time, where it may rotate at a slow or fast speed, affecting the timing needed to obtain the desired item. 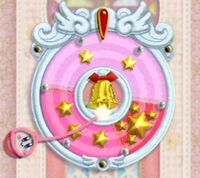 This Goal Game consists of a spinning wheel with sections containing various numbers of stars on them (depending on how many Bonus Stars were collected beforehand), and a bell in the middle, referred to as the Bonus Bell. Ringing the bell causes the wheel to spin slower and slower, until coming to a stop. Landing on a particular section awards Kirby and Prince Fluff a number of beads proportional to the star count multiplied by 100.

This Goal Game is practically identical to the one from Kirby's Adventure. However, instead of points and 1-Ups, Kirby and his companions are awarded Point Stars instead. Up to four players can take part in this Goal Game simultaneously, on their own sections of platforms.

The Goal Game in this title resembles the one from Kirby Super Star, but functions more like the one in Kirby's Return to Dream Land. Kirby is placed into a cannon and is fired into the background, colliding with aerial enemies along the way. Landing on the far spots nets Kirby Keychains in addition to the usual bonuses.

The Goal game in Kirby and the Rainbow Curse is a roulette wheel.

At the end of each non-boss stage is a roulette wheel of eight spinning orbs containing various items. Kirby has to collide with one of the orbs in order to obtain the bonus inside. Bonuses include Point Stars, 1-Ups and entries for the Secret Diary.

This Goal Game is largely the same as the one in Triple Deluxe, but features a new aesthetic, as well as different enemies to collide with on the way.

The goal game in this title is very similar to the one in Kirby's Return to Dream Land, albeit with a few changes. Firstly, instead of using a cloud trampoline, Kirby and his friends utilize a stone platform held up by a Popon, which turns magenta if the timing is perfect. Second, only human-controlled friends get their own separate platforms, with CPU friends sharing with the human players. Third, reaching the top spot after the jump nets the participant a Picture Piece.

If the Goal Game separates the players into two or more teams (which happens if more players join the game), it is possible to get a Team Bonus if the players land on the same platform, netting them more Point Stars.