Biggy, Boney, and Sleepy[1] are three geeky animators under contract for Night Mare Enterprises who appear in the Kirby: Right Back at Ya! episode Tooned Out. They are brought into Dream Land by King Dedede in order to make a professional cartoon about him, but the three animators decide to make their cartoon about Tiff instead, and proceed to stalk her in order to get material for their project. They are shortly caught by Tiff and her friends, but manage to slip away and are then locked up in the Castle Dedede dungeon in order to finish the cartoon under a tight schedule. King Dedede is soon made aware of their real intentions and tries to circumvent them by calling in another animator, but when that fails, he is forced to air their cartoon, which ends up drawing Tiff's ire.

Biggy, Boney, and Sleepy are three humanoid young men who are characterized as geeky and perverted, though skilled at animating. Throughout Tooned Out, they become obsessed with the idea of making a cartoon about Tiff, and pursue her well beyond her personal boundaries in order to accomplish this task. The following table describes each of the animators individually, though it should be noted that despite their differing appearance, they all have largely the same personality: 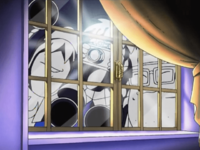 The three animators violating Tiff's privacy to get pictures of her

Biggy, Boney, and Sleepy are called in to Dream Land by King Dedede via Night Mare Enterprises as contract employees in order to help Dedede produce a professional cartoon about him. As soon as they review the previous cartoon made in Cartoon Buffoon, however, the three become fixated on Tiff in particular and decide to make the cartoon about her instead. To this end, they proceed to stalk Tiff by placing a hidden microphone on her picnic basket and covertly following her and getting pictures. Tiff eventually finds them out and apprehends them with the help of her friends, and takes them to police headquarters in Cappy Town for questioning. The three reveal they are trying to make a cartoon about her, and Tiff ardently refuses the idea, demanding they make something original instead. The Cappies volunteer to help the three come up with story ideas, but the animators manage to slip away while the Cappies argue over this.

When they return to Castle Dedede, Biggy, Boney, and Sleepy are apprehended by King Dedede and thrown into the dungeon to force them to work on the cartoon day and night to meet the tight deadline for the show's airing. However, Tiff reveals to King Dedede what his cartoonists are actually drawing, which forces him to come up with a workaround by hiring the legendary cartoonist Dis Walney. This ends up not working, and King Dedede is forced to air Biggy, Boney, and Sleepy's finished cartoon, but he and the others recoil in horror when they see the cartoon is little more than a fetishization of Tiff. Tiff retaliates by chasing after the three animators with King Dedede's hammer, and it is not shown what ends up becoming of them after that point.