Galacta Knight (referred to as Aeon Hero in Quests in Super Kirby Clash) is a powerful recurring boss in the Kirby series, also known as "The Greatest Warrior in the Galaxy". Galacta Knight greatly resembles Meta Knight, even being the same size, but sports key visual differences. His body is magenta in color, and his eyes behind his mask are red (magenta in Kirby Star Allies onward). His mask has a pointed cross-shaped visor on it instead of a horizontal slit. Unlike Meta Knight's bat wings, Galacta Knight has feathered angelic wings. He fights with a magenta lance and a shield with a four-pointed star on it, much like the design of his mask.

Galacta Knight resembles Meta Knight greatly in terms of physique and general movement and attack patterns. The primary difference is in his color scheme, as well as the details of his armor and weapon. Galacta Knight sports a primarily magenta body hue, only slightly off in color from Kirby. Notably, his feet are also magenta, which differentiates him from both Kirby and Meta Knight, whose feet do not match their body color. Galacta Knight's eyes are rendered as simple colored circles, which are red in Kirby Super Star Ultra until Kirby: Planet Robobot and magenta in Kirby Star Allies onwards. What he looks like without his mask is simply unknown, since unlike Meta Knight, his mask has never broken in any scene.

According to a Miiverse post going over the winning drawing of the "Kirby: Planet Robobot Drawing and Screenshot Challenge", Galacta Knight was given "...an angelic, godlike look to contrast with Meta Knight’s bat-like wings".[1] He sports a fancy white mask with a pointed cross-shaped visor and two yellow horns. Like Meta Knight, he sports two pauldrons and greaves, though these have no emblem on them. To fly, he uses a pair of angelic white wings. He carries a magenta lance with a circular cross-guard on the hilt, though it resembles a standard sword due to its short length. He also carries a shield with a yellow four-pointed star-shaped emblem on the front and magenta markings. Galacta Knight makes good use of his kit as he battles, as he can fly freely, deliver rapid flurries with his lance, and block with his shield, even when moving.

In his official artwork for Kirby Super Star Ultra and the "Super Ultra Battle" Celebration Picture from Kirby Star Allies, Galacta Knight's body is depicted as blue/violet instead of magenta.

Galacta Knight made his debut as a surprise boss in Kirby Super Star Ultra. At the end of Meta Knightmare Ultra, Meta Knight meets Galactic Nova, who grants him one wish. Meta Knight wishes to fight the strongest warrior in the galaxy so that he may become stronger, so Nova summons Galacta Knight, who had been sealed away because of his immense power. After his defeat, Galacta Knight flies upwards and explodes, which causes him to lose his wings, lance and shield.

Galacta Knight's attack patterns are similar to Meta Knight's, but he makes liberal use of energy attacks. He often guards as well, which makes him invulnerable to damage in the process. He is also battled by Kirby in The True Arena. When on the ground, he hovers instead of standing most of the time. Unlike most bosses, which lose over half of their health when hit by a Mach Tornado, Galacta Knight loses only a small fraction of his health, because of his resistance to "Crash-type" attacks, Mach Tornado being one of them. Final bosses in later titles tend to have the "Crash" resistance as well.

The following lists all of Galacta Knight's attacks in Kirby Super Star Ultra. 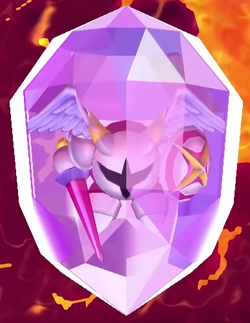 Galacta Knight encased in crystal, just before the fight begins in The True Arena of Kirby's Return to Dream Land.

Galacta Knight reappears in Kirby's Return to Dream Land. He is first seen in the Theater movie "Special Staff Credits" after the player completes Extra Mode, indicating his appearance elsewhere in the game.

Galacta Knight is eventually fought as a surprise boss in The True Arena, between HR-D3 and Magolor EX. He is generally considered to be the hardest boss in that game, and appears nowhere else in it. Galacta Knight also makes an appearance in the audience during Kirby Master! video.

Galacta Knight fights in two phases, and has several new attacks in his arsenal, including summoning lightning bolts as well as firing lots of energy sword projectiles that bounce off the ground. He often guards as well, which makes him invulnerable from damage in the process. Unlike in Kirby Super Star Ultra, he stands and dashes on the ground in this game.

The following lists all of Galacta Knight's attacks in Kirby's Return to Dream Land. Attacks in italics are used during the second phase only.

Throughout the battle, Galacta Knight may take a guarding stance. Any attacks that hit him during this pose deal no damage.

Galacta Knight is referenced as a rare Keychain. He also makes a small cameo during Kirby Master! video, where he can be seen in the audience, in the back row.

In Kirby: Planet Robobot, Galacta Knight (here referred to as Galacta Knight Returns) is summoned as the final opponent for Meta Knight to face in the "Sword_Master.EXE" credential process (after Dark Matter Clone and Sectonia Clone) in Meta Knightmare Returns. Galacta Knight did not appreciate getting forcefully yanked from beyond space and time against his will, so he immediately thanks his summoner, Star Dream, by slicing it along its base and causing it to topple over.[2] Meta Knight must fight and defeat him again, all the while dealing with his new and powerful arsenal. Once defeated, Galacta Knight is re-sealed, and sent back from whence he came. Galacta Knight is also faced by Kirby in The True Arena. In there, instead of being summoned by Star Dream, Galacta Knight comes down to the field in his seal, and breaks out of it. His defeat animation is also different, mirroring his defeat in Kirby Super Star Ultra.

In the Japanese and Korean versions of the game, Galacta Knight's pause screen description states that he is capable of bringing everything to ruin, and that he was sealed many times over the ages but never successfully destroyed.[3][4]

Galacta Knight's attacks are basically the same as in Kirby's Return to Dream Land but with a few changes. He also hovers on the ground like his debut in Kirby Super Star Ultra. The following lists all of Galacta Knight's additional attacks in Kirby: Planet Robobot. Attacks in italics are used during the second phase only.

In Kirby Battle Royale, the Galacta Knight Mask is one of Meta Knight's alternative pieces of Headgear, unlocked by scanning the Meta Knight amiibo.

In Kirby Star Allies, Galacta Knight is first seen during the Theater movie of Story Mode staff roll, "Kirby's Curtain Call", indicating his appearance. Later, Galacta Knight appears with the alias "Temporal Warrior" at the end of Guest Star ???? Star Allies Go! to serve as the final boss. However, before he gets the chance, a strange butterfly lands on his lance, makes him vanish and absorbs his power, creating a new swordsman called Morpho Knight.

Galacta Knight's appearance and subsequent removal can be seen as a joke at the old warrior's expense, as his appearances were no longer a surprise. His Japanese alias in Kirby Star Allies, 時巡る戦士 ("The Warrior Who Crosses Time"), is a reference to the Kirby: Planet Robobot remix of his theme (時巡る銀河最強の戦士).

Additionally, according to Shinya Kumazaki, Galacta Knight was considered as a Dream Friend for Kirby Star Allies, along with other characters such as Drawcia, Elline and Shadow Kirby, but ultimately wasn't chosen due to a rule that was established soon after, which excluded characters who first appeared in remakes.[5] 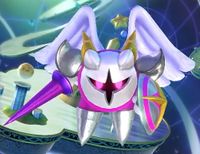 The Greatest Warrior in the Galaxy appears as the Aeon Hero in Super Kirby Clash.

In Super Kirby Clash, Galacta Knight (now called Aeon Hero in Quests) appears as the last opponent in the game. He is summoned through a portal by Parallel Nightmare's Revenge as a last resort to defeat Team Kirby, but the angered warrior slays the wizard before engaging them. Just as before, Aeon Hero possesses immense magical power in addition to wielding a lance and shield, but this time, he has two alternate powered-up forms, referred to as Aeon Hero (Light) and Aeon Hero (Dark), which change his appearance somewhat. Additionally, just like other enemies in the game, Aeon Hero has been beefed up somewhat in size, making him an imposing figure.

Aeon Hero is faced in a total of four different Quests, all of which are Ordeals. His first appearance is in his standard form just after Parallel Nightmare's Revenge summons him in Toughest: The True Final Battle. His second is in his Light form for the final Story Quest, his third is a Party Quest in his normal form, and the last is the final Super+ Party Quest in his Dark form. When his Light form is defeated, Aeon Hero dissipates leaving a scattering of feathers, similarly to how Morpho Knight dissipates in Kirby Star Allies. When defeated in his Dark form, he is sealed back into the crystal and sent through a vortex back into the alternate dimension from whence he came.

General director Shinya Kumazaki explains the origins behind Aeon Hero as such:

Aeon Hero's attacks are largely the same as they were in his prior appearances as Galacta Knight, though many have had updates to both appearance and function. To compensate for the increased number of his opponents, Aeon Hero relies more heavily on his big magical attacks, using his lance and shield less often.

Throughout most of the battle, Aeon Hero may occasionally take a guarding stance. Any attacks that happen to hit during this pose deal no damage.

The following are all of Aeon Hero's attacks in Super Kirby Clash across all four battles. Note that attack names are conjectural unless otherwise stated:

In Kirby's Dream Buffet, Galacta Knight appears on two Character Treats. The first depicts him in sprite form from Kirby Super Star Ultra, and the second depicts him as "Aeon Hero", using his artwork from Super Kirby Clash. 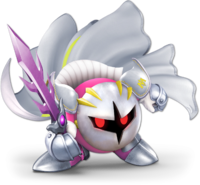 Meta Knight's 7th color change in Super Smash Bros. Ultimate, which is based on Galacta Knight.

In Super Smash Bros. for Nintendo 3DS / Wii U, Meta Knight has received a color change based on Galacta Knight. Galacta Knight also appears as a trophy in the Wii U version.

Galacta Knight appears as a Primary Spirit in Super Smash Bros. Ultimate. His Spirit can only be obtained via Summon, the required Spirit materials being Shovel Knight, Knight Man and the Meta-Knights.

Galacta Knight's Spirit is Shield-type, ranked ★★★★ Legend, has no support slots and the skill of Sword Attack ↑. With base stats of 2,669 attack and 2,183 defense, he has the highest total Base Power of all Spirits not counting Galeem and Dharkon, somewhat matching his title of "the greatest warrior in the galaxy". His max stats are 6,673 attack and 5,459 defense.

In addition, the Galacta Knight-based color change of Meta Knight has more resembling details than that in Super Smash Bros. for Nintendo 3DS / Wii U.

Main article: The Greatest Warrior in the Galaxy

Galacta Knight's theme song is titled "The Greatest Warrior in the Galaxy". Originally a heavy metal style track, it has been remixed several times with additional embellishments.