Kirby: Triple Deluxe is a game released for the Nintendo 3DS in 2014 and serves as the tenth main series Kirby game (not including remakes). It is a 2.5-D platformer with a special mechanic that allows Kirby and other characters to change to and interact with different planes, thus adding limited three-dimensional interactivity to the gameplay. In addition, the game makes use of the 3DS's built-in motion controls for certain gameplay elements, including tilt bowls, 3D Tilt Missiles, and Tilt Gondolas. Finally, the game marks the debut (and only) appearance of the Hypernova ability, which drastically enhances the power and reach of Kirby's signature inhale.

This title also heavily features King Dedede, giving him his own Sub-Game and Extra Mode, as well as involving him prominently in the main story.

The main Story Mode of Kirby: Triple Deluxe takes place in the sky-bound kingdom of Floralia. Kirby is brought up to this kingdom when a giant plant called the Dreamstalk lifts his house into the air. Castle Dedede is also lifted up, from which a strange arachnid mage named Taranza is seen kidnapping its king. Kirby gives chase after them through the six major islands of Floralia, dealing with many large enemies which Taranza summons or aggravates to slow Kirby down. As Kirby ascends, he collects Sun Stones to grow the Dreamstalk further, giving him a bridge to each island in turn. He also encounters a number of Miracle Fruits which grants him the powerful Hypernova ability when consumed. At the highest island - Royal Road - Kirby finds and frees a number of imprisoned flower sprites who are known as the People of the Sky.

Once Kirby finally catches up to Taranza at the palace atop Royal Road, the arachnid mage explains how it was his objective to capture the hero of Dream Land in order to stop him messing up his and his queen's plans for domination. He then uses his magic to take control of King Dedede and have him fight Kirby while wearing a familiar mask. Kirby defeats Dedede and breaks the spell, making it clear who the real hero of Dream Land actually is. At this realization, Taranza calls upon Queen Sectonia to save him, but the furious queen instead swats him away for his failures. From there, Kirby and the queen do battle.

Queen Sectonia is overpowered by Kirby, and forced to retreat, using her magic to merge with the Dreamstalk, thus beginning the process of strangling Floralia and the rest of planet Popstar of all its energy. King Dedede regains consciousness, and with the help of the freed People of the Sky, launches Kirby toward the main stalk of the now Flowered Sectonia. They fight until the sun comes up, but just as Kirby is about to seize victory, the queen ensnares him with a vine and begins to squeeze him. At this, King Dedede and Taranza (with a change of heart) come to Kirby's rescue, freeing him and giving him one more Miracle Fruit to use against the queen. Kirby finishes off Flowered Sectonia by inhaling her giant laser blast and spitting it back out at her, destroying her utterly. This done, Kirby is ferried back home by the People of the Sky, and the Dreamstalk is purified, going into full bloom and becoming a permanent fixture of Dream Land. One of the core features of Kirby: Triple Deluxe is Kirby's brand-new Hypernova ability, which significantly powers up his inhale, allowing him to swallow just about anything.

This game plays very similarly to its predecessor, Kirby's Return to Dream Land. It even has several of the same Copy Abilities and items, such as the Key. However, the main new gameplay element is the divide between the foreground and the background.

In Kirby: Triple Deluxe Kirby is no longer limited to just one path. He is now able, and often required, to use special 3D Warp Stars to move from the foreground to the background, and vice versa. While in one plane, the player can see items and enemies in the other. Sometimes, Kirby even gains weapons that let him directly attack the enemies in the other plane, such as the 3D Laser Bar, and the 3D Helmet Cannon. The enemies can do the same, with some enemies such as Sir Kibble and Spynum able to launch their projectiles into the other plane. Enemies such as Waddle Dee and Chip can jump from one plane to the other to ambush Kirby.

There are also many obstacles that attack Kirby from the background or foreground, such as rolling boulders, falling pillars or trees, and extending Springy Hands. In some instances, Kirby may get launched forward and hit the "screen", sliding downward afterward. This doesn't necessarily cost Kirby a life (as long as he is not low on stamina), but it will always make him lose his Copy Ability if he had one.

Aside from this, the game introduces a new standard move, the Dodge. This is activated by pressing any direction while using the Guard, or pressing L or R in midair to perform an Air Dodge. While dodging, Kirby is completely invincible against enemy attacks for a brief moment. This is an especially handy technique in boss fights to avoid taking damage that the standard Guard would not block. However, it is not usually necessary to use in the Main Game; the move is more useful in The Arena, The True Arena, and Kirby Fighters.

The game contains many collectibles. A primary example is Keychains. There are 256 of these scattered throughout the levels. Each one depicts a pixelated sprite of a character or object from previous Kirby games. The specific Keychain that is collected in stages is not revealed until after the Goal Game. Keychains are randomly determined, and it is possible to get the same Keychain more than once. There are also Rare Keychains, which are golden. These are found in fixed locations, one in each stage. They are not random; each stage has its own unique Rare Keychain that usually depicts a more significant character or object than the standard Keychains.

The other main collectibles are the Sun Stones, which serve a similar function to the Energy Spheres from Kirby's Return to Dream Land. There are a set amount of Sun Stones in each level and 100 available total. Most are hidden in secret rooms; some are in plain sight, others are hidden in chests. Kirby is required to collect a certain amount of them to access the boss of each level. If all of the Sun Stones in a level are collected, a bonus EX stage is unlocked. These stages are slightly longer and more difficult, contain few Sun Stones, and end with a battle against a DX Mid-Boss. There are also Grand Sun Stones, which are obtained after defeating the boss of a level. These give access to the next level, and it is necessary to collect all five of them. If Kirby collects all 100 Sun Stones, he will be rewarded with a Rare Queen Sectonia Keychain.

This game makes moderate use of tilt-based motion controls, having the player tilt the Nintendo 3DS system to accomplish certain tasks. These may involve tilting a bowl of water, setting the direction for a Tilt Cannon to fire, or traveling over a pit in a Tilt Gondola. These tasks are usually optional, but may reward Kirby with a Keychain or Sun Stone.

There is also an additional mode titled Dededetour! that allows the player to play as King Dedede. His controls are mostly the same as in Kirby's Return to Dream Land (and, consequently, the Hammer copy ability), but with some new upgrades. He can create a shockwave with his hammer at full health, akin to the Sword ability, and launch a cutting beam from his hammer when charged, akin to the new Archer ability. Dedede Hammer Flip and Hammer Twirl retain their previous ability to light things on fire, while Giant Dedede Swing now has wind properties that can put out flames; this allows Dedede to tackle most elemental puzzles that Kirby would require different abilities for. 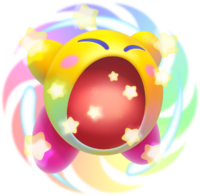 Newly introduced in Kirby: Triple Deluxe is a special ability known as Hypernova. This ability is not obtained from any enemies and is instead acquired when Kirby touches a Miracle Fruit. Hypernova causes Kirby to shimmer in all colors of the rainbow and causes his mouth to glow white. He gains an extremely powerful inhale which can uproot and absorb things much more massive than Kirby himself. Kirby can use this ability to tear apart obstacles and move large objects, as well as inhale giant enemies. He can also move backward and forward while inhaling, but not when he has his mouth full. The Hypernova ability overrides any standard Copy Ability Kirby may have and will wear off once the stage is completed, returning Kirby's original ability to him. It cannot be discarded before this point unless the player quits the stage early.

Kirby: Triple Deluxe features a total of 25 standard Copy Abilities, with four of them being brand new abilities. Like Kirby's Return to Dream Land, these abilities feature extensive move-sets and most offer high versatility.

Kirby: Triple Deluxe features a total of 42 stages in the Story Mode. All main levels include one boss stage and one Extra stage (except for Level 6, which has two Extra stages), which are included in the stage count.

Kirby: Triple Deluxe features a large array of enemies, many of which directly carry over from Kirby's Return to Dream Land. There are however a relatively small number of new enemies, with many of those being Hypernova-specific. The following tables list each standard enemy in Kirby: Triple Deluxe:

Note: More powerful Deluxe forms of these mid-bosses, which have "DX" appended to the ends of their names, appear at various points throughout Story Mode; in Dededetour!, all mid-bosses are battled in their DX forms.

These mid-bosses are only encountered during Hypernova sections, and can only be defeated using the said ability. They do not appear during Dededetour! and do not have DX forms.

Note: In Dededetour! and The True Arena, all bosses are fought in their more powerful Deluxe (DX) forms (except for those that only appear in Story Mode).

Various copy abilities were nerfed in the transition from Kirby's Return to Dream Land to Kirby: Triple Deluxe. A lot of the abilities still have their cut moves in the code of the game.

The following is a list of staff who have worked on Kirby: Triple Deluxe:

This particular piece of art from the Kirby 30th Anniversary set references the first letters of each level in Kirby: Triple Deluxe.