Ice Dragon Robot[1] is a robotic monster which makes its only appearance in Labor Daze; episode 28 (26 in the 4Kids broadcast) of Kirby: Right Back at Ya!. It is modeled after Ice Dragon and as such, is able to breathe a cone of freezing breath. It was built using the unwitting labor of the Cappy Town inhabitants and must be piloted to function.

Ice Dragon Robot is a giant metal vehicle built and painted to resemble the huge Ice Dragon from Dedede's Snow Job. It has a tall body with stubby limbs and a head within which the cockpit resides. On the belly is a large metal plate with King Dedede's emblem emblazoned on it. Ice Dragon Robot is also capable of roaring.

Ice Dragon Robot is slow and lumbering, with its only real offensive weapons being its girth and its freezing breath. Unlike the original Ice Dragon, Ice Dragon robot cannot be defeated using Ice attacks, as it has no internal organs to freeze. Instead, Ice Dragon Robot's weakness is heat, and if heated too much, it will explode. 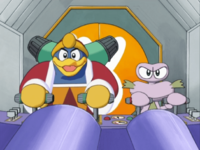 Ice Dragon Robot is manufactured in secret using King Dedede's "appliance" factory. Having received the necessary infrastructure from Night Mare Enterprises, King Dedede and Escargoon trick the residents of Cappy Town into working as assembly line laborers to help assemble the robot's parts in exchange for various household appliances. Tiff, Tuff, Kirby, and Fololo & Falala discover the robot by sneaking into the back room of the factory, and only when the robot reveals itself do the villagers at the assembly line come to their senses. Kirby swallows some of the robot's ice breath to gain the Ice Copy Ability, but he is unable to subdue the robot using his freezing breath. Instead, Kirby is instructed to attack the factory's main boiler, causing the furnace to shatter and fill the factory with fire. This fire causes Ice Dragon Robot to overheat and explode, destroying it and foiling Dedede's plans.