Boxy is a Mid-Boss that appears in two games: Kirby & The Amazing Mirror and Kirby: Squeak Squad. It resembles a bright pink present box with a red bow on top of it and a vine growing from the bottom, which ends in two green leaves. It possesses two oval eyes and a large mouth with sharp teeth, which can cause damage to Kirby. Sometimes, it creates boxes that contain bubbles, enemies, or power-ups.

Boxy attacks by jumping, rushing forward, and spitting out gift boxes which contain various objects. In both of its appearances, Boxy gives the Magic ability when inhaled and swallowed after its defeat.

Boxy makes its debut in Kirby & The Amazing Mirror. In this game, Minny is one of the enemies that can appear from the boxes that Boxy spits out. 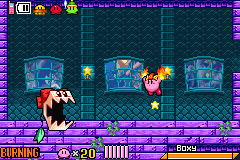 Boxy can be found in the following rooms:

Boxy returns in Kirby: Squeak Squad, acting the same as in its previous image, though the items that can appear from its boxes are different.

Boxy appears as a collectable sticker in this game. When used in The Subspace Emissary, it will grant +24 to bite attacks. It only works for Yoshi, Wario, Wolf and Pokémon Trainer, however.