Spinni is a Mid-Boss and one of the major named members of the Squeaks alongside Daroach, Storo and Doc. He is characterized by his stylish red sunglasses and long cape, and makes use of his speed and agility in fights. His main weapons are a set of throwing stars and a metal claw, both of which can be knocked away and swallowed for various Copy Abilities. Spinni made his first appearance in Kirby: Squeak Squad, and would last appear as part of Daroach's Dream Friend move-set in Kirby Star Allies.

Spinni has the general appearance of a mouse with yellow fur, with similar body proportions to Daroach, though not possessing Daroach's long claws. His size is middling, being larger than Doc and the regular Squeakers, though smaller than Daroach and Storo. He wears a set of opaque triangular red sunglasses over his eyes and a long red cape around his neck.

The North American English manual for Kirby: Squeak Squad describes Spinni as "the Speed"[1]. This is reflected in Spinni's respectable running speed and agility, being able to make large leaps over obstacles and often challenging Kirby to races for Treasure Chests. When not attempting to evade Kirby, Spinni attacks using either throwing stars or a metal rake claw. When Spinni is hit, he may drop one of these weapons: inhaling the throwing star will give Kirby the Ninja Copy Ability, and inhaling the claw will give him the Animal ability. Like Doc and Storo, Spinni will drop a treasure chest he is carrying if he is attacked, and can be stunned after subsequent hits in order to make other items drop, such as food. Depleting Spinni's health bar will cause him to vanish in an explosion, rather than become inhalable like regular mid-bosses.

One notable aspect of Spinni is his exceptional swimming ability; a trait that most other mid-bosses lack. 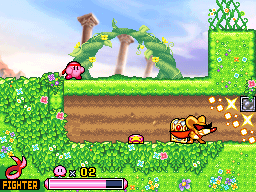 Spinni is a reoccurring Mid Boss in Kirby: Squeak Squad. He is the fastest of the four lead Squeaks. Spinni usually appears on levels with set paths or levels where Kirby must race to get the large treasure chest.

Like Storo, he sometimes appears when Kirby obtains a large chest. As such, his main goal is to steal Kirby's chest and take it to the Squeaks' hideouts. Kirby can either run away with the chest, defeat Spinni, or if Spinni already obtained the chest, Kirby can quickly go to the hideout to defeat him. Spinni's method of attacking is by either hitting Kirby with a claw or shuriken (ninja star), both of which may be inhaled and thrown back at him or swallowed to get either the Animal ability if Spinni drops his claw and Kirby swallows it, or the Ninja ability if Kirby swallows the shuriken when it is thrown at him.

Spinni is a short yellow mouse with a red cape and sunglasses. His main trait is agility and mastery with weapons, able to swim underwater with efficacy. If he is stunned inside the hideout, he will turn red once recovering and get noticeably stronger, becoming resistant to flinching. Spinni also makes an appearance in the sub-game Smash Ride, where he is the main opponent.

In Kirby Mass Attack, Spinni appears boarding Daroach's Airship after Sandy Canyon is cleared. While he can't be interacted with, Daroach mentions him in some dialogue.

Spinni appears as a keychain in Kirby: Triple Deluxe, using his sprite from Kirby: Squeak Squad.

In Kirby: Planet Robobot, Spinni appears as a sticker using his artwork from Kirby: Squeak Squad.

In Kirby Star Allies, Spinni appears as part of Daroach's move-set, when he uses the appropriately-named 'Summon Spinni' technique. When called, Spinni runs forward, jumping over gaps, attacking enemies or objects in the way with his claw, and will also turn when running into a wall. He disappears after about five seconds.

In Kirby's Dream Buffet, Spinni appears on one of the Character Treats, using his artwork from Kirby: Squeak Squad.

In the Kirby novel series, Spinni appears as a supporting antagonist in Kirby Meets the Squeak Squad!. He is part of the Squeaks as one of Daroach's three high-ranking henchmen. Like the other three, Spinni is extremely loyal to Daroach. Spinni is the most talkative of the three, and will do most of the talking when Daroach is not with them. His main method of attack is throwing shurikens. Spinni also cares a lot about his red scarf, as he refuses to fight Fire Kirby to avoid the risk of it getting burnt.

In Kirby Meets the Squeak Squad!, Spinni helps Daroach steal the egg that Kirby and Waddle Dee are tasked with protecting. He first appears when Kirby first finds the egg at an ancient temple. He shows up with Storo and Doc to ambush the two of them. He notices that Kirby has the advantage when he spits fire at Storo and Doc with his Fire ability. Spinni stays off to the side to keep his scarf from getting burnt, and flees with his two comrades.

Later on, Daroach plans to sneak in to Castle Dedede at night to snatch the egg, while everyone is asleep. Spinni enters from the balcony with Daroach, who wakes up Kirby and Waddle Dee due to a "warning device" they tied to it made of cans and rocks. Daroach and Spinni make a run for it with the egg, with and get on Doc's machine for their getaway while Storo stays to block Kirby's path. Kirby gets past Storo, and easily catches up to them. Daroach commands Spinni and Doc to fight Kirby, while he runs off with the egg. Just then, Sparky enters to complain about all the commotion, and Kirby inhales him to gain the Spark ability. He gives Spinni and Doc a good shock, defeating them. With the two of them out of the way, Kirby runs after Daroach.

In the end, it is revealed that Daroach only wanted the cushion that the egg was strapped to. He had trouble falling asleep before, and wanted to take the cushion so he could use use it as a pillow. The mother bird forgives him for all the trouble, and allows him to keep it. With the Squeaks on good terms with everyone, they bid farewell and fly away in their airship.