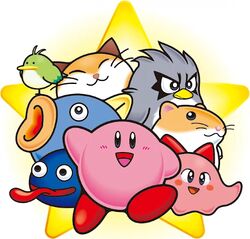 Group art of Kirby, Gooey, and all six Animal Friends

The Animal Friends are a group of characters who serve as Kirby's allies. They made their debut in Kirby's Dream Land 2. More specifically, the term refers to the rideable animal companions which Kirby can mount and combine his powers with. There are six of them in total.

Most of the animal friends are somewhat larger than Kirby, and all of them provide their own unique way of moving once they are paired up with him. Kirby can only travel with one Animal Friend at a time and will have to switch out between them based on what task needs solving.

Rick, Kine, and Coo first appear in this title. They each have their distinct advantages and disadvantages when paired up with, and will use their own special version of whichever Copy Ability Kirby has equipped. Using their power is necessary to collect some of the Rainbow Drops. To find them, Kirby will have to free them from a bag by defeating the Mid-Boss on guard. If that animal friend is already freed, Gooey or Girl blob will appear instead.

In Kirby's Star Stacker (both versions), Rick, Kine, and Coo feature prominently, both on the puzzle board as blocks that need to be moved around and in cut-scenes and illustrations. Unlike in the main series titles, there is no functional difference between the animal friends in gameplay.

In addition to the previous three, Nago, ChuChu, and Pitch appear in this title. Unlike the previous, they can be found in the open in various rooms, and Kirby will have to pick between them. Using each one in specific situations is necessary to get all of the Heart Stars. 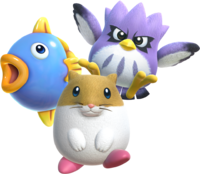 In Kirby Star Allies, Rick, Kine, and Coo appear as Dream Friends, albeit rolled into a single character. They switch out based on which attacks are being used, playing in a tag-team style; when not attacking, Rick is used by default, Kine is used while swimming, and Coo is used when in the air after using Flutter or Parasol Coo. Their abilities are based on fusion Copy Abilities from Kirby's Dream Land 2 and Kirby's Dream Land 3, and are capable of providing the Bluster, Sizzle, Splash, and (under rare circumstances) Blizzard elements to other abilities. In addition, while using Stone Rick, Rick can participate in Curling, Geokinesis, and Rock Painter. Rick also retains his abilities to not slip on ice and to damage enemies by jumping on them. Kine has the distinction of being the fastest swimmer of all the available characters. While guarding, Rick hides in a bag which is similar to the ones they were held in from Dream Land 2. Their unique rooms in Guest Star ???? Star Allies Go! recreate stages from Dream Land 2 and/or utilize Rick & Kine & Coo's abilities. The trio's Friend Star bullets are Sizzle-based.

ChuChu and Pitch are also depicted in the Celebration Picture "A Dream Above the Clouds". For some reason, Nago is not depicted with them.

The animal friends often make cameos in other titles in the series. Most of the time, this entails appearing in Sub-Games or having their likenesses made into collectible items. The most prominent cameo comes from Kirby 64: The Crystal Shards when Kirby uses the Stone-Cutter Power Combo. Doing so transforms Kirby into a stone replica of one of his animal friends, giving him a different movement option (or none at all) with each one.

Rick, Kine, and Coo appear as distinct characters in Kirby: Right Back at Ya!, with some episodes featuring them prominently. They appear to have no direct connection to Kirby in the show, and are merely intelligent creatures living in Dream Land.