Kibble Blade is a Mid-Boss in Kirby's Return to Dream Land that yields the Cutter Copy Ability when inhaled. Its attacks are similar to that of its smaller cousin, Sir Kibble, in that it tosses the blade on its head. It can do this in several different patterns. It will also attempt to ram Kirby, much like most of the other Mid-Bosses.

Kibble Blade debuted in Kirby's Return to Dream Land, acting as a Mid-Boss throughout the game and using mostly his blade to attack Kirby. In the Extra Mode and The True Arena, Kibble Blade EX, a tougher variant of the normal enemy using black armor is found.

In Kirby's Return to Dream Land, Kibble Blade can be found in the following levels and stages:

Kibble Blade returns in Kirby: Planet Robobot, now sporting a new semi-robotic look to fit with the mechanization theme of the game. It also has an upgraded version known as Kibble Blade 2.0.

In Kirby: Planet Robobot Kibble Blade (and its 2.0 variant) can be found in the following levels and stages: 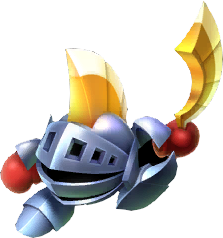 Kibble Blade is fought on three separate occasions in Team Kirby Clash Deluxe. Here, it is beefed up in size and strength, and given a number of new attacks. 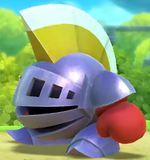 Kibble Blade is fought three separate times in Super Kirby Clash, behaving like it did in the previous game. It's fought twice on its own, and again with Gigant Edge as part of Team Mighty Cleave. It is however largely out-shined by its flashier cousin, Frost Kibble Blade.

The following are all of Kibble Blade's attacks in Team Kirby Clash Deluxe and Super Kirby Clash. Note that attack names are conjectural: