Tiff is the deuteragonist of the anime Kirby: Right Back at Ya!. She is the daughter and eldest child of King Dedede's Cabinet Minister, Sir Ebrum, and Sir Ebrum's wife, Lady Like. She lives with her parents and younger brother, Tuff, in Castle Dedede. Tiff is one of Kirby's closest allies and is mentored by Meta Knight. Tiff is known to be very intelligent for her age, and she is the only one who has the ability to call upon the Warp Star when needed since she is the one who cares about Kirby the most.

Tiff is a pale yellow-skinned young girl who is about twice Kirby's height with long hair that she keeps in an ornate ponytail held by purple and orange clasps and expressive green eyes. She almost always wears a one-piece outfit which is pink on the top with puffy sleeves and green on the bottom that is separated by a zigzag and orange shoes.

Neither Tiff nor her family are Cappies. The only similarity between them is the yellow skin color. Other than that, the design of their heads, eyes, and limbs are completely different. 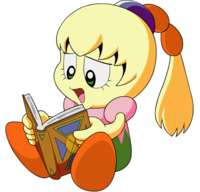 Tiff is among the most developed and prominent characters in Kirby: Right Back at Ya! due to being the main speaking character of the show and the closest ally of Kirby. She is portrayed as being highly intelligent and resourceful, often outclassing the adults of Dream Land. In addition, she is a fountain of knowledge in all manner of subjects, mainly concerning the natural sciences and mathematics. As such, she is often the one left to explain the various situations that occur in the episodes, and is also often responsible for forming plans to solve the main conflicts of the show, as well as giving Kirby advice in battle. Over the course of the show, King Dedede and Escargoon come to understand how pivotal Tiff is to Kirby's success, and as such, do whatever they can to belittle and hinder her.

Counterbalancing Tiff's intelligence is her short temper and naivete, which demonstrates that despite her knowledge, she is still young and inexperienced. This particularly shows when King Dedede and Escargoon succeed at getting on her nerves, and can sometimes result in putting Kirby in danger, due to not always understanding how to handle him. Tiff is also very prone to making mistakes when she is annoyed or angry, which leads her to sometimes accuse Kirby of things he did not do, an example being in The School Scam. In order to help Tiff regain composure and offer her the wisdom she needs, Tiff frequently receives aid from her main mentor Meta Knight, who tries his best to offer suggestions and hints to Tiff rather than just giving her the answer, in hopes that she will better herself by working it out on her own. Tiff also has a healthy rapport with the other senior members of Dream Land, most notably Professor Curio and Mabel, who she looks up to as role models. Notably, despite their usual animosity toward one another, even Escargoon will sometimes seek Tiff's help when circumstances lead to the two of them sharing a cause or a problem.

Tiff is extremely protective of the people and things she cares about, and can be considered activistic. She is not afraid to berate anybody who she believes to be in the wrong, even if that person is pointing a weapon at her. Due in part to her noble status and in part to her own personal quirks, Tiff is also extremely proud, which is often used against her by her opponents. Despite this weakness, Tiff is typically able to recover quickly, and always tries her best to keep an optimistic point of view. To help her with this, she relies on Kirby's persistent cheerfulness, as well as the strength of her other friendships. 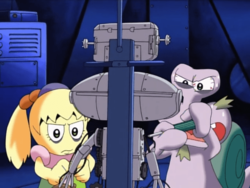 Tiff has many of the most complicated character relationships in the show, one of her most notable ones being her often conflicted interactions with Escargoon. 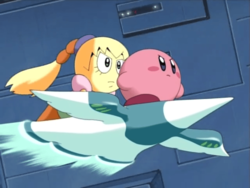 Tiff has many duties as a character, but her most important one is backing up Kirby.

Due to Kirby's inability to speak in full sentences, Tiff can be regarded as the main speaking protagonist of the show, which is accentuated by the fact that she often takes the role of lead character in episodes until Kirby needs to step in to deal with a monster. The show establishes the relationship between Tiff and Kirby as the most prominent one in the narrative, with Meta Knight in particular pointing out that it is only Tiff who can call Kirby's Warp Star due to being the one who cares the most about him. As the show goes on, Tiff becomes the one primarily responsible for Kirby's safety when he isn't battling a monster, and goes to great lengths to defend him from the various schemes of King Dedede or the misgivings of the people of Cappy Town. Due to her youth and inexperience, Tiff often requires assistance at this task, and usually receives the most meaningful advice from Meta Knight, who she looks up to as a mentor. At one point, she even learns self-defense techniques from the masked swordsman, giving her some proficiency in fighting by the end of the series, though still not enough to battle tough monsters.

Aside from her role as Kirby's main guardian, Tiff is usually the first source of expository information about whatever subject matter an episode focuses on due to her encyclopedic knowledge of many things, particularly when it comes to environmental issues. She is often the one who has to educate and/or warn the Cappies about varying phenomenon, whether they end up listening to her or not. Tiff is also usually the one responsible for doing the investigative work necessary to solve the main dilemmas in most episodes, with assistance from her close cohorts including Tuff, Fololo & Falala, and sometimes even Kirby.

Tiff appears in all 100 main episodes of Kirby: Right Back at Ya!, along with Kirby 3D. For a full list of her appearances and role in each one, see this page.

While it is not confirmed, viewers have suspected that the Dream Land princess in the Kirby of the Stars Pilot is an early design of Tiff. As they have the same color of skin and basic body design, as well as being Kirby's primary friend and being royalty. Additional similarities include the princess's strong emotional reactions and the manner in which she meets Kirby.

Despite all this information, little else can be determined, due primarily to the sparse nature of the cartoon the Dream Land princess appears in; particularly the lack of spoken dialogue.