Rocky is a reoccurring enemy throughout the Kirby series, making his debut in Kirby's Adventure and appearing in many of the games released since then. He resembles a walking stone with a pair of flat feet, black eyes and often a corded headband which closely resembles Hammer Kirby’s headband. While his colors may vary between appearances, he is most commonly depicted as brown or orange with yellow feet.

Rockies commonly situate themselves atop tall columns, Star Blocks or other high-elevation objects. Their location is significant in terms of how they attack: Rocky uses his high perch as leverage to drop down on Kirby as he is walking by, in an effort to squish him with his weight. In the event that Rocky misses, he will rise, exposing his feet, and slowly walk around. In some of his appearances, if Kirby is on the same level as Rocky, the foe will jump to a location in the air right above Kirby and hesitate a beat before attempting to fall on top of him once more. As a Rocky can only fall straight down, however, his attacks can be easily avoided by moving out of the way.

While a Rocky is vulnerable to all attacks, defeating him by any means other than inhaling can take a long time in any game that assigns health meters to enemies due to the enemy's sturdiness. As one would expect, if Rocky is ingested, Kirby will receive the Stone Copy Ability. 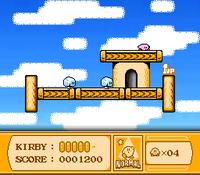 Rocky made his debut appearance in Kirby's Adventure, and appears again in the remake; Kirby: Nightmare in Dream Land. Here is where he gained his most common look and behavior, though missing his headband. He serves as the sole provider of the Stone ability.

Rocky makes an appearance in Kirby's Dream Course as a regular enemy on courses. He does not move, and grants the Stone ability when collided with.

In Kirby's Dream Course, Rocky can be found in the following courses and holes:

Kirby and Kine encountering a Rocky in the way in Kirby's Dream Land 2.

Rocky makes an appearance in this game. Though his behavior mirrors that from his appearance in Kirby's Adventure, Rocky has a new look: he has a rounder shape and his eyes now have sclerae.

Rocky appears in this game as a common enemy, being introduced in Stage 5. He is worth 1000 points when collided with and provides Kirby with the Stone ability. 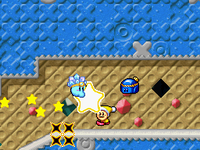 Rocky returns as an enemy in these games. He uses his look from Kirby's Adventure, though now with a corded headband, which he keeps in most later games. Unlike previous and subsequent appearances, he is often encountered in a blue hue as an enemy. Additionally, when hit, he appears to fracture for a moment before reconstituting himself. When recruited as a helper, Rocky gains access to all of Stone Kirby's moves, and also gains the Infinity Jump.

Rocky returns in this game, bearing largely the same look and behavior from his appearance in Kirby's Dream Land 2. Like in that game, he is missing his headband.

In Kirby's Dream Land 3, Rocky can be found in the following levels and stages: 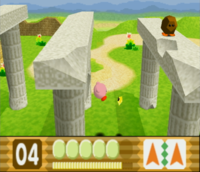 Kirby moving past Rockies prepared to fall on him in Kirby 64: The Crystal Shards.

Rocky appears in 3-D in this game, though he has a greatly simplified appearance here, consisting only of a rounded rock with a pair of black eyes and orange feet. He typically waits at a high place for Kirby to approach, and then tucks his feet in to start rolling off the edge of his precipice to fall swiftly onto Kirby. From there, he will try to walk back and forth slowly. Unlike in most other games, Rocky is comparatively rare in Kirby 64: The Crystal Shards due to the fact that many other enemies in the game also provide the Stone ability.

Missile Kirby flying past a Rocky in Kirby & The Amazing Mirror.

Rocky appears in Kirby & The Amazing Mirror, looking and functioning exactly as he did in Kirby: Nightmare in Dream Land. Additionally, Droppy can take on his likeness after it obtains the Stone Copy Ability from Kirby.

Rocky may be found in all areas of the Mirror World except for Carrot Castle and Radish Ruins.

Rocky appears in Kirby: Canvas Curse, sporting its usual look and bahavior. It waddles along the ground slowly, and will try to leap over, then fall on Kirby to attack.

In Kirby: Canvas Curse, Rocky appears in the following locations:

Rocky appears in the Sub-Game Kirby Curtain Call, as one of the many enemies and other objects cluttering the stage on each round. Rocky does not appear in the main game.

Kirby shielding himself from three Rockies about to fall on him in Kirby's Return to Dream Land.

In Kirby's Return to Dream Land Rocky can be found in the following levels and stages:

In addition to most of the games featured in this collection, Rocky also appears as an enemy in New Challenge Stages, taking his appearance from Kirby's Return to Dream Land.

A Rocky in Kirby: Triple Deluxe.

Rocky appears in these titles, bearing a similar look and function to his appearance in Kirby's Return to Dream Land.

In Kirby: Triple Deluxe Rocky can be found in the following levels and stages:

In Kirby: Planet Robobot Rocky can be found in the following levels and stages:

In Kirby Battle Royale, Rocky does not appear as an enemy, but does appear in the audience for Robo Bonkers and Slam Hockey.

Rocky returns physically and behaviorally unchanged from the previous modern games. He can be made into a Friend, and gains all of Stone Kirby's abilities in addition to an Infinity Jump.

In Kirby Star Allies Rocky can be found in the following levels and stages:

In Kirby's Dream Buffet, Rocky appears on the Friend Circle Character Treat along with Wester, Waddle Doo, and Kirby.