Phan Phan is a Mid-Boss that debuted in Kirby: Nightmare in Dream Land, where it replaces Rolling Turtle from the original Kirby's Adventure, and has since appeared in various other games of the Kirby series. It was last seen as an enemy in Kirby Super Star Ultra, where it appeared in Revenge of the King and The True Arena. Depending on the game, it yields either the Throw or the Suplex Copy Ability when Kirby inhales and swallows it after defeating it.

Phan Phan's appearance is similar to that of an elephant, except that it is bipedal and has a spherical body. It has large, black eyes, and three strands of hair, similar to the two strands of hair on Waddle Doo. Phan Phan often attacks by rolling at Kirby, lifting and throwing him with its trunk, and stomping on him. It also throws apples at Kirby, which can be inhaled and spat out at Phan Phan to deal damage.

The name "Phan Phan" is derived from the word elephant.

Phan Phan debuted in Kirby: Nightmare in Dream Land and replaces Rolling Turtle (the original Throw-yielding mid-boss). It gives 1500 points when defeated. Its difficulty level varies by color, with its default gray variation being the easiest, its blue variation being quicker, and its hidden green variation being very aggressive. It appears in the following stages: (Star Bullet=10 damage) 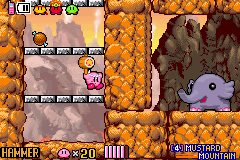 In Kirby & The Amazing Mirror, Phan Phan acts the same as its appearance in Kirby: Nightmare in Dream Land. It always has 30 HP (Star Bullet=10 damage) but now it has four types of resistance:

Phan Phan can be found in the following rooms:

In Kirby Super Star Ultra, Phan Phan appears in Revenge of the King and The True Arena and yields the Suplex ability instead. It now has 200 HP (Star Bullet=52 damage) and gives 5000 points when defeated.

Phan Phan appears as a Keychain in Kirby: Triple Deluxe.

Phan Phan appears as a monster in the Kirby: Right Back at Ya! episode Cowardly Creature. In this episode, Phan Phan escapes by unknown means from Night Mare Enterprises' "Young Monsters of the Future" training school and ends up in Dream Land, where it causes havoc in Cappy Town while wearing a clown mask and nose. King Dedede bats this mask away while fighting it, causing the giant elephant to become timid and run away, and later prompting Kirby to step in and defend the helpless monster from King Dedede's assault. Kirby and Phan Phan later become friends, but the monster Whippy is sent to subdue Phan Phan and turn it hostile again. After a lengthy battle, Kirby gathers the courage to face his former friend and uses the Throw Copy Ability to grab and dispose of Whippy, returning Phan Phan to its normal self again. From there, Phan Phan becomes a permanent resident of Dream Land and is later seen in the finale residing in Whispy Woods Forest.

Phan Phan is largely the same in appearance as it is in the games, though it is much larger and is reluctant to fight unless dominated by another force. It enjoys apples and becomes friends with Kirby, unlike the game version who is consistently hostile towards him.