This article is about heart-shaped items in Guest Star ???? Star Allies Go! that power up its user in various ways. For the heart patch in City Trial, see Patch.

Power-Up Hearts are items which appear exclusively in Guest Star ???? Star Allies Go!; an Extra Mode in Kirby Star Allies. Picking up one of these hearts will augment the health, speed, or attack of the user and their team, depending on the type of heart collected. Each stat can be increased up to five times before hitting the maximum, from which no further stat boost will have an effect. Power-Up Hearts can be obtained in stages by defeating enemy ambushes, exploring side areas, or opening Treasure Chests. When entering a new level, all stat bonuses gained will be lost.

There are four types of Power-Up Hearts in the game, with each having a different effect. They are as follows: 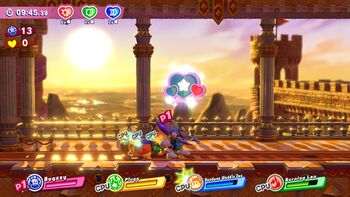 Bugzzy and his team find an All-Up Heart. Note also the heart stats in the top-left.
Retrieved from "https://wikirby.com/w/index.php?title=Power-Up_Heart&oldid=352491"
Category: