This article is about the Japanese-exclusive version on the Super Famicom. For the Game Boy version, see Kirby's Star Stacker (Game Boy).

Kirby's Star Stacker[2] (also referred to as Kirby's Super Star Stacker[3] and Kirby no KIRAKIRA KIDS[4]) is a puzzle game of the Kirby series that was released on the Super Famicom in Japan. It was first released in 1998 through the Nintendo Power flash service, but eventually saw a physical release a year later, in 1999. It is an enhanced remake of Kirby's Star Stacker for the Game Boy. It was later ported to the Virtual Console for Wii, Wii U, and New Nintendo 3DS in Japan only, as well as the Super Famicom Nintendo Switch Online app (which is accessible in Japan, Taiwan, Hong Kong, and Macau).

One starry night, an alien creature named Mr. Star zooms past Dream Land. King Dedede spots him in the air and blasts him with a cannon, causing Mr. Star to split into several pieces and fall to the ground. The principal piece of Mr. Star falls on Kirby's head, as he was out stargazing from a teepee. After learning of his predicament, Kirby and his Animal Friends help Mr. Star find his pieces again, each of which is kept by a different denizen of Dream Land.

One-by-one, Kirby and his friends trounce the baddies who were holding Mr. Star's pieces, culminating with King Dedede himself. Once Mr. Star is whole again, he returns back out into space. Shortly after, a witch named Gryll appears from where Mr. Star left to present the final challenge to Kirby. 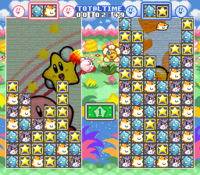 Kirby and Lovely face off in the Story Mode. Gameplay of the Time Attack mode.

Due to being a remake of the Game Boy original, Kirby's Star Stacker plays largely the same way. The player is given a game board which fills up with various types of blocks that fall from above in a similar manner to Tetris. The main objective is to clear these blocks by lining them up in the correct ways. The main method of doing this is by placing two of the same type of "Friend Block" (resembling Kirby's Animal Friends Rick, Kine, and Coo) in-between one or more Star Blocks. The number of Star Blocks removed then determines how many "stars" Kirby has "stacked", which is the main scoring mechanic in the game. Blocks fall in pairs with random types inset, which can be steered using the Control Pad until they land on the blocks below, whereupon they break apart if one side is still hanging over an empty space. In addition to the above blocks, there are also two other types: Hard Blocks and Bomb Blocks. Hard Blocks can be turned into Star Blocks when sandwiched between two matching Friend Blocks, and placing a Bomb Block between two Friend Blocks will remove all blocks on the same row.

Depending on the game mode being played, there may be additional rules and conditions, but generally speaking, the player can continue to place down blocks so long as the two middlemost columns are still open at the top, and new rows of blocks will continually appear from below, pushing the others up. If either of the two middlemost columns reaches all the way to the top of the screen, the game is over. 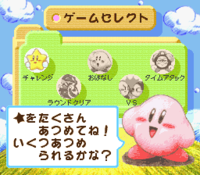 In the game there are 5 modes, as follows: 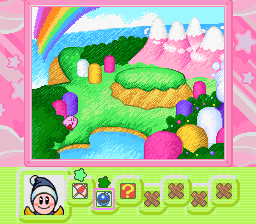 The Story mode stages are accessible from a map.

Story Mode is the main new feature here when compared to the Game Boy original. In this Mode, Kirby faces off against an opponent, and they each get their own separate board to drop blocks in. The goal here is to prevent Kirby's board from filling up, while also causing the opponent's board to fill. To that end, the player will need to systematically remove blocks from the board as they fall down by lining them up correctly. This can be done by having an unbroken line of Star Blocks in-between two Animal Friend blocks of the same type, or by simply lining up two of the same type of Animal Friend together. If a large number of blocks are removed at once and/or a chain of block removals is caused, Kirby will be able to cause his opponent's board to start filling with blocks from the bottom-up, and vice/versa.

There are two difficulty modes for Story Mode, those being "Amateur" and "Professional". The difficulty chosen determines the speed and skill level of the CPU opponents. There are a total of eight opponents to face in the Story Mode, which are fought in sequence. The last of these - Gryll - can only be faced if all prior opponents were defeated without losing a single time. The official web guide for the game makes it a point to mention that if the player prematurely stops a given round in order to restart, that will not count as a loss.

The following are details on each opponent in the Story Mode:

The following is a list of staff who have worked on Kirby's Star Stacker: