Kirby: Nightmare in Dream Land is a remake of Kirby's Adventure for the Game Boy Advance. It was developed by HAL Laboratory and published by Nintendo in 2002 by HAL Laboratory and Nintendo, and would later be ported to the Wii U's Virtual Console in 2014. The game features new and redesigned Sub-Games, all of which have up to 4-player support through multiplayer. A new Extra Game starring Meta Knight was also added as an unlockable mode, called Meta Knightmare. Kirby: Nightmare in Dream Land was released around the debut of the anime Kirby: Right Back at Ya!, which is reflected by the art style used on the North American commercial and its box art. This game also introduced a redesigned English logo for the Kirby series which would remain largely unchanged until Kirby and the Forgotten Land, 20 years later.

Kirby: Nightmare in Dream Land is a full overhaul of Kirby's Adventure, with a new engine and entirely re-done 16 bit graphics, music, and sound. The art style is also heavily modified, focusing on more vivid photorealistic scenery and backgrounds when compared to the NES original. Regardless, the enemies, copy abilities, music, and stage layouts are (for the most part) the same as they were before, just updated in fidelity. The story is also largely the same, though it has been reworded from the original version.

Kirby: Nightmare in Dream Land shares the same basic premise and story as Kirby's Adventure. It begins when Kirby wakes up one day to realize he has not had any dreams. Suspecting something to be wrong with the Fountain of Dreams, he heads there to find the Star Rod missing from its rightful place at the crest of the fountain. Shortly thereafter, he discovers that his old rival King DeDeDe had stolen the Star Rod and broke it into seven pieces, each then given to one of DeDeDe's friends (the bosses of each level). While not knowing the reason for this, Kirby nonetheless resolves to get the pieces and reassemble the Star Rod so he can return it to where it belongs.

After traversing Dream Land and retrieving the first six pieces of the Star Rod, Kirby returns to the Fountain of Dreams and battles King DeDeDe for the last piece. Kirby resoundingly trounces the king, and - after reassembling the Star Rod - places it back onto the fountain as DeDeDe desperately drags on Kirby's heels begging him not to do it. Kirby quickly figures out why, as - upon placing the Star Rod on the fountain - a great darkness emerges and is freed upon the world. Kirby must then use the Star Rod to battle the Nightmares, defeating him and blowing a massive hole in the Moon in the process. With this deed done, Kirby finally returns the Star Rod to the fountain without further issue and forgives King DeDeDe for what he had done, knowing he was only trying to safeguard the kingdom. 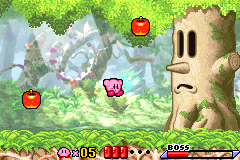 Kirby: Nightmare in Dream Land is an action platformer where the player takes control of Kirby: the powerful little pink hero of Dream Land whose main claim to fame is his ability to inhale his enemies and gain their powers. The main goal of the game is to traverse each of the levels and their stages in order, maneuvering through tricky terrain and battling enemies along the way. Due to the wide variety of abilities that Kirby has access to, there are many different ways to clear the obstacles in each stage, including going without abilities at all and using Kirby's ability to spit out Star Bullets to deal damage. In addition, Kirby's ability to hover through the air and breathe underwater - along with his generous health bar - make the environmental elements very forgiving when compared to other classic platformers. Overall, the game is catered to easy and accessible play, with more challenging elements being optional for the most part.

While the main goal of the game is to reach and defeat each level's boss, there are a number of optional objectives to meet as well. This mainly takes the form of hunting down Big Switches in stages, which unlock additional doors in the hubs of the levels they are found in. There are also optional Sub-Games and other rooms which can be visited in each level in order to earn 1-Ups or gain extra abilities. If the main game is completed after pressing down all of these switches, an Extra Game will open up that lets Kirby play again under more challenging circumstances. Should that be cleared too, Meta Knightmare becomes available as well as the Boss Endurance mode, creating an additional level of challenge for the player to undertake.

Aside from the more obvious changes to the graphic and audio fidelity, there are a number of more subtle differences between Kirby's Adventure and Kirby: Nightmare in Dream Land, as follows:

The following are all of the options available from the main menu after selecting a file (though some need to be unlocked first):

The main game of Kirby: Nightmare in Dream Land takes place in eight distinct levels which are played in order, as follows: 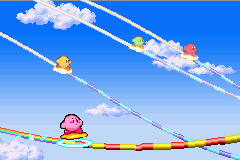 Screenshot from Kirby's Air Grind, one of the new Sub-Games.

The levels of Kirby: Nightmare in Dream Land feature optional doorways (many unlocked using Big Switches in regular stages) that lead to Sub-Games and other areas. These are as follows:

In addition, there are two extra modes available only from the main menu as follows (these need to be unlocked first):

Kirby: Nightmare in Dream Land retains all of the same Copy Abilities that first debuted in Kirby's Adventure, with the same basic powers and controls. The following table lists each of them:

Kirby: Nightmare in Dream Land features most of the same enemies as the original Kirby's Adventure, though a few have been changed (see "Changes from Kirby's Adventure" section above). The enemies in this game are as follows:

The following is a list of staff who have worked on Kirby: Nightmare in Dream Land:

Kirby: Nightmare in Dream Land would go on to influence several future games in the Kirby series as follows:

Everyone in Dream Land has lost the ability to dream! It seems that King Dedede has stolen the Star Rod, the source of power for the Fountain of Dreams, and given its fragmented pieces to his goons for safekeeping.

The world needs a hero...a round pink one. As Kirby embarks on an adventure to recover the Star Rod, he'll have to copy every trick in the book to bring good dreams back to Dream Land.