Teacher Creature is an anthropomorphic teacher's hat monster that appears in the Kirby: Right Back at Ya! episode eNeMeE Elementary. It starts out as an inanimate green teacher's cap which possesses anybody who wears it and turns that person into a harsh and dangerous disciplinary instructor. After Tiff discovers the hat to be the culprit, it transforms into its larger monster form and attacks Kirby using various teaching implements. After inhaling its projectiles, Kirby gains the Fighter Copy Ability and from there quickly defeats Teacher Creature.

Teacher Creature initially resembles a basic traditional Western-style teaching cap with an accented green base and black top. Whenever somebody puts on the cap, that person is immediately dominated by the monster's will and become much more aggressive and strict toward the students. Teachers under the influence of the cap will severely punish students for misbehaving and seek to harm them in other ways as well. They also take any opportunity they can to praise King Dedede and teach propaganda in his favor. This effect ends as soon as the hat is removed, and those formerly under its spell seem to not understand what happened while wearing it.

When in its monster form, Teacher Creature grows much larger and resembles a traditional east-Asian scholar's cap with arms, though it still retains elements of the former hat design, now flipped upside-down. It attacks using body slams, striking with a teacher's pointer, and tossing chalk sticks and erasers. Teacher Creature cannot be inhaled directly, but its projectiles can be swallowed by Kirby for the Fighter ability.

In the Japanese version, Kyoshi repeats the phrase (translated) "It's cool when you wave!", which is a portion of the Dedede Elementary School's anthem in that version of the show. 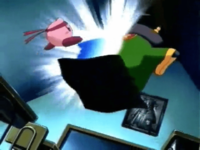 Teacher Creature appears in eNeMeE Elementary, and for most of the episode is disguised in its hat form while it influences the teachers who wear it. Tiff eventually discovers that the hat is making the teachers aggressive, and after inadvertently wearing it herself, uncovers the monster with the help of Tuff and Kirby. At this point, it reveals its true form and attacks Kirby directly. After failing to inhale it, Kirby gets tossed out of the school through a wall by Teacher Creature, and then gets pelted with chalk sticks and erasers. Tiff tells Kirby to inhale these projectiles instead, which gives him the Fighter ability. Using this ability, Kirby quickly defeats Teacher Creature with three moves, finishing with a Rising Break that causes it to explode, taking the school with it.