The Invincible Candy,[1] formerly known as Candy,[2] is a special item found in most games of the Kirby series. It is a rare item that resembles a glowing lollipop with a star. While the Invincible Candy is a lollipop, it is not technically food, as it does not recover any health. 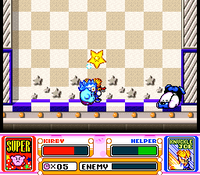 When Kirby is under the effect of Invincible Candy, he can defeat strong enemies like Mr. Frosty by simply touching them.

An Invincible Candy makes Kirby, his helper(s), or other playable character(s) temporarily invincible when eaten, enabling them to harm enemies and bosses without taking damage, as well as moving through hazards like spikes unharmed. However, the invincibility wears off after a few seconds, and it does not protect Kirby from falling into a bottomless pit or being crushed.

Notably, a special effect happens when acquiring some Invincible Candy while riding the Friend Star in Kirby Star Allies. The pause screen lists this effect as a move called "Shooting Star", and it allows the Friend Star to plow through enemies, metal blocks, and fragile walls by simply moving into them.

Invincible Candy appears as an item in the following Kirby games:

Invincible Candy is also depicted in other ways in the following games:

While Kirby is under the effect of an Invincible Candy, a special musical theme plays, which can be heard in nearly every game that includes the Candy. Kirby 64: The Crystal Shards and Kirby Mass Attack are the only games to have a different Invincible Candy theme than the recurring one. When the Invincible Candy is consumed in Kirby Air Ride, no special theme is played at all.