Hardy[Japanese title] is a robotic dentist monster which appears in the Kirby: Right Back at Ya! episode A Dental Dilemma. Its only purpose is to forcefully fix the teeth of whoever it can find, and it chases down King Dedede after he calls it in from Night Mare Enterprises, not realizing beforehand that Hardy operates "without anesthetic". Hardy is later dispatched by Tornado Kirby after it tries to examine his mouth, but finds no teeth to fix up.

In the 4Kids English dub of the anime, Hardy is not named. Hence, its name is derived from the Japanese version.

Hardy is a robot designed to look like a mouth with appendages. It sports two stubby feet, four arms with two gloves, a giant drill, and a pair of pliers, and a single eye stalk which has a built-in flashlight. Hardy's voice does not emanate from its mouth, with its mouth instead opening up into a chair on which it lays its patients while operating on them.

Contrary to expectations, Hardy is a very skilled dentist, and can fix up teeth in seconds for no charge. In the Japanese version, Hardy is claimed by Bun to have operated on him painlessly despite not using anesthetic. Hardy is also not particularly adept at fighting, as its only skills lay in dentistry.

Role in A Dental Dilemma[edit] 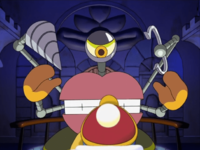 Hardy prepares to operate on King Dedede after emerging through the teleporter.

Hardy makes its only appearance in A Dental Dilemma, where it is called in by King Dedede to fix his cavities so that he does not have to have them treated by Doctor Yabui. However, it is not revealed until after Hardy emerges from the Night Mare Enterprises Teleporter that it does not use anesthetic, which leads King Dedede to immediately regret his purchase and run from the monster. King Dedede ends up leading Hardy to the other principal characters of the episode who had gathered with him in the castle courtyard, which leads the robot to grab Tuff - who also has a cavity - and operate on him first. After Tuff's cavity is fixed, Hardy chases after King Dedede again, but Dedede tricks Kirby into attempting to inhale the monster, which draws the attention onto him instead. After resisting Kirby's inhale, Hardy grabs him and attempts to operate on him, but finds no teeth to drill. In its confusion, Kirby is able to inhale Hardy's drill bit to gain the Tornado Copy Ability. Using this ability, Kirby then blows Hardy off into the sky out of Dream Land, and it is not seen again.