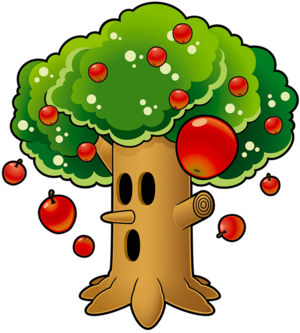 Whispy Woods, one of the most well-known bosses in the Kirby series.

A boss is a distinguished enemy that is typically faced at the end of a level, and is usually very strong in comparison to others. Bosses come in many shapes and sizes, but they all have the following things in common:

Enemies that possess some, but not all of these traits are usually considered Mid-Bosses, and are usually not as powerful.

Boss fights have been a staple of the Kirby series since the very first game, and have appeared in nearly every subsequent entry. Below are listed every single major boss under their respective games, in order of appearance, as well as any other pertinent notes:

Kirby's Dream Land was also the first game to introduce the idea of an Extra Game, wherein the bosses were made harder in certain respects, among other changes.

This game was the first in the series to feature a Boss Endurance mode, which pitted Kirby against all the bosses in order on one Health bar and one life.

Once King Dedede is defeated, the game repeats. 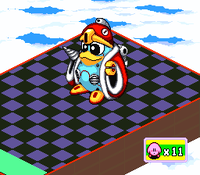 In Kirby's Dream Course, there is but a single boss fight which takes place in a special course dedicated to it at the very end of the game. This fight takes place against Robo Dedede - a large robot built to resemble King Dedede and who has him as its pilot - who battles Kirby by shooting out smaller clockwork Dedede robots and inching towards Kirby, defeating him if it gets to Kirby's starting point. Kirby can defeat Robo Dedede by launching into it, dealing additional damage when hitting the head using aerial shots.

In the Extra Game, Robo Dedede has more HP, but otherwise acts the same.

Every opponent faced in Kirby's Avalanche is technically referred to as a "boss" in the game's manual, though since there are no other types of enemies to speak of, this term is not useful as a distinguisher.

Each stage features a distinct boss at the end. They are as follows:

Kirby Super Star was the first game to introduce The Arena, which pitted Kirby against all the bosses and mid-bosses of the game in a random (at first) order with minimal supplies.

Likewise, Super Star Ultra was the first game in the series to feature The True Arena, which is like The Arena, but features tougher bosses and less items available.

In Kirby Tilt 'n' Tumble, there are only three bosses, though the first two are faced numerous times with variations in each fight. Further variations in the boss fights are present when playing the Extra Game:

Kirby: Canvas Curse only features two traditional bosses (those being Drawcia and Drawcia Soul), faced at the very end of the main game. There are technically four more bosses (Kracko Jr., Kracko, Paint Roller, and King Dedede) who are faced along the way in scenarios called Boss Games. These games (Block Attack, Paint Panic, and Cart Run) have different gameplay, so they are more akin to Sub-Games.

Each land aside from Quilty Square has a stage dedicated to a boss encounter. The bosses of Kirby's Epic Yarn and Kirby's Extra Epic Yarn are as follows:

There are five bosses in Kirby Mass Attack, each serving as the final obstacle of each level. The first four are fought for a second time in Necro Nebula.

Nearly all the bosses in this game have an EX form, which is generally stronger and bears a different color palette (or other visual changes). Those that don't will be mentioned as such. This game also formally introduced the concept of having the boss change its tactics when its health reaches a certain threshold (usually when the boss loses half of its health).

Aside from the games contained in this collection, there is a separate boss fight in the New Challenge Stages Sub-Game. At the end of the Smash Combat Chamber EX, Kirby has to contend with Whispy Woods, appearing as he did in Kirby's Return to Dream Land, but fighting like his EX form from that same game. Unlike in other cases, Whispy's health bar is not shown during the fight.

Like in Kirby's Return to Dream Land, most bosses have more powerful alternate forms (known as DX here), but not all do. Most bosses also incorporate the foreground and background when fighting.

Some bosses in this game are fought throughout regular stages later. In addition, the third time Flowery Woods is encountered, Kirby has the Hypernova ability, and swallows him whole without a fight.

There are twelve unique bosses in Story Mode with the addition of three new bosses in Meta Knightmare Returns, and one new boss in The True Arena. Like in the previous two main series games, most bosses have stronger versions, denoted by 2.0, and are fought in the aforementioned two modes. Some bosses are fought in circular arenas in certain phases, much like in Kirby 64: The Crystal Shards.

The following table lists all the bosses fought in Story Mode, Meta Knightmare Returns, and The True Arena. This does not count Sub-Game bosses like the Team Kirby Clash bosses and the Mashers (classified as Mid-Boss instead) from Kirby 3D Rumble.

Many enemies encountered in this free-to-start spin-off title are beefed up considerably in subsequent encounters, given more Health and more attack options. Almost all enemies are faced at least twice this way, except a handful in the last area. The enemies are as follows:

Unlike Kirby 3D Rumble, this game features boss encounters at the end of each level. These bosses fight in a more elaborate manner than common enemies, and have specific arenas devoted to them. Each boss (excepting Giant Masked Dedede) also has an EX form which is faced in the extra stages. The bosses of Kirby's Blowout Blast are as follows:

In this title, there is only one instance where a proper "boss" is faced; at the end of Dedede's Cake Royale against Dededestroyer Z. Robo Bonkers can also be considered a boss of sorts, but the way he is battled de-emphasizes the idea of a showdown against the enemy itself in favor of competing with other contestants to see who can do the most damage to a slow-moving target.

There are 26 distinct bosses in Kirby Star Allies (not counting Galacta Knight). Some bosses may change their behavior based on how many allies are in the team.

The following table lists every distinct boss in Kirby Star Allies in the intended order of encounter:

In addition, every boss in Star Allies has their own caption on the boss splash screen.

The following table lists every unique enemy in Super Kirby Clash. Note that the number of encounters includes those where the enemy is partnered with others and also include battles with a powered-up version ("EX" and "Revenge") of the same enemy.

There are a total of four distinct bosses in Kirby Fighters 2's Story Mode: The Destined Rivals (five if Waning Masked Dedede & Waxing Masked Meta Knight are counted as a distinct boss), and they are re-fought multiple times with each subsequent fight being tougher and featuring new enemy moves. The bosses are as follows: